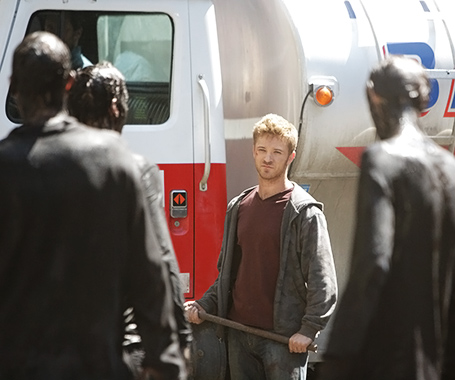 Following a successful premier, Syfy’s Z-Nation follows up with a great second episode that develops more on a couple of character backstories while still raking in the gory bits and pieces of flesh and bone of zombie deaths. Z-Nation can deliver unsuspecting turns making this show unpredictable and entertaining.

Still considered to be a carbon-copy of The Walking Dead, Z-Nation slowly begins to journey itself away from the widely popular AMC series. I’m also seriously impressed with the special effects that Z-Nation (zombie stuck in the truck carriage, burnt to a crisp zombie, and zombie fuel tank) and while the series is not gored up by effects guru Greg Nicotero, there does lie some great talent behind Z-Nation’s blood.

The characters are starting to come to light with Pisay Pao’s Cassandra and her pack of dark secrets and as well as Keith Allan’s Murphy character and his struggle to maintain his convict past. Critics might be a bit harsh at first, but I think Z-Nation’s like-ability will come around with critics and see that’s not to compete with the drama of The Walking Dead. Instead, Z-Nation will stand on it’s own to dead feet and come out on top as an entertaining zombie series.