When I first read the title “Zombie Isle,” the first thought was the popular survival horror game “Dead Island” where you can take on a horde of bikini clad, thong and thong wearing, tropicana-sippin’ zombies with various melee weapons. Sounds blood thirsty enough to be turned into a movie, right? Well “Zombie Isle” is obviously not the same brainchild from the people behind the “Dead Island” video game. One could only help and what happens to high hopes usually? High hopes are usually squashed and sure enough “Zombie Isle” was a big bust for not only meeting my expectations of being like the “Dead Island,” but for also being one of the many sheep in the undead genre.

A group of university students and their teacher embark on a field trip to an uninhabited island to study the habitat. When they split up into groups of two, all hell on the island is unleashed and the students succumb as meals for the zombies that inhabit the uninhabited island. Not only do the flesh eaters swarm the island, but a mad Nazi doctor looks to replace the brain his deceased love into one of the bodies of the gorgeous girls trespassing on his island. 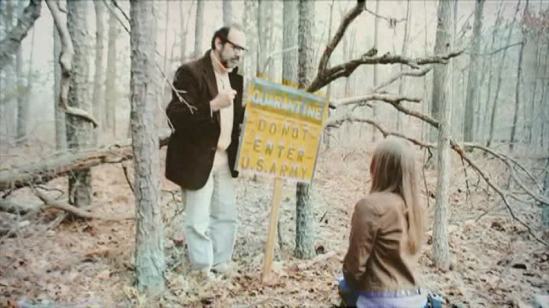 “Zombie Isle’s” plot is, first off, way too scattered to fully explained how this island became ground zero for possible Nazi or U.S. Army experimentation – it’s not really explained. The Nazi mad doctor has a syringe he injects into the neck of the dead bodies to awaken them into flesh eaters. Nobody knows how he got to the island and no one really seems to ask. Also, the doctor keeps a giant three headed mutated zombie chained to a tree. Again, this all goes unexplained. Half the characters gets rip to shreds in the first 15 minutes of the film and that makes caring for characters really difficult.

On the positive spectrum of “Zombie Isle,” the gory schlock really is potent. Zombies scooping out brains with their hands, stomachs being ripped open and disemboweled, and brains being munched on. With the gory and the blood, the parodical nature of the film, especially with the two dimwitted hotties, can kind of keep us awake at times; as for the rest of the duration, watch your eyelids become heavy and heavier. The zombies themselves do a good job. Hell, even the three headed mutant zombie has a certain ghoulish charm to it even though it’s obviously fake and goofy cladded, but with director Robert Elkins’ use of cigarette burns and faux faulty-like film strips the creature is hidden behind the throwback grindhouse cinematic style. The cast consisting of Crystal Howell, Tony Jones, Apryl Crowell, Kyle Billeter, Davids S. Witt, and Jonathan Moody are seemly a tight-knit group of people who’ve worked on films together before. They feel comfortable in what they’re trying to accomplish, but their really is no depth in their personas.

On a technical note, the dialogue audibility is absolute crap. One minute you can hear the characters fine and then the next you’re turning up the volume. Constantly I was fiddling with the controls to find a ideal setting and just wasted my time and energy. Also, the soundtracks is very repetitive and drowns out most of the dialogue as well. The sure signs of low budget filmmaking and not making use of something better than to just repeat soundtrack audio. The foley sounds of squished heads and knocks to people’s dome pieces might as well come straight out of a Roadrunner and Coyote cartoon. 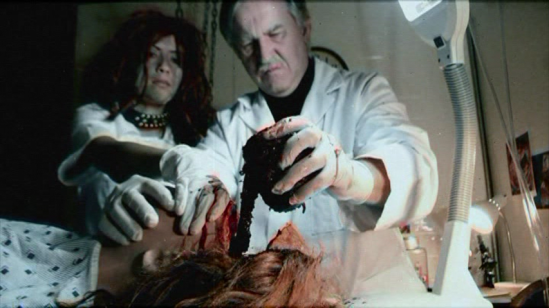 “Zombie Isle” heart and soul likes with the gore effects not leaving the film to be an empty shell. The characters are the empty shells and the production kind have been better along with fine tuned story in which the parody could have stayed as some of bits were smirk-able. Surprisingly, no nudity for a zombie film with a bunch of university students, but that doesn’t give the film low marks at all. With that being said, “Zombie Isle” releases this Tuesday October 7th, but if you must venture into an overplayed genre, there are better zombie films out there that won’t leave you stranded on an island.