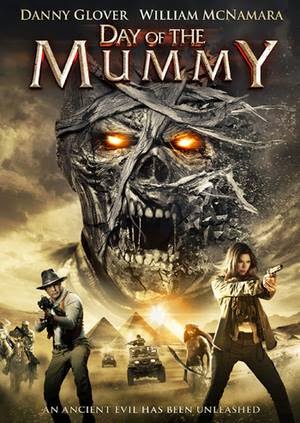 Too few and far in between does a current release for a horror film about mummies comes out. Right off the top of my head, I can only recall Universal’s remake of The Mummy trilogy and Sands of Oblivion. I’m sure if I really thought more about this I could come up with one or two more films about mummies. When I was contacted to screen and review “Day of the Mummy,” a little piece of me couldn’t wait because the mummy genre is the neglected red-headed step child that the public doesn’t like and production companies just don’t know how to market Egyptian crypt keepers. Exploring “Day of the Mummy” was exciting at first but my finds remind me again why being dead, wrapped in bandages, and buried in an ancient tomb can’t catch a break in cinema land.

Well-experienced and notorious Egyptologist Jack Wells is contracted to joins a group of archeologist in a Egyptian desert where a hidden tomb of an infamous and cursed king named Neferu is supposedly buried. Jack’s intentions are not to locate the tomb, but rather recover the Codix Stone that was buried with Neferu. When the team locates the cavernous tomb, a collapse of the cave’s structure traps them inside a tomb that doesn’t exactly hold a dead, mummified King. Their search brings them face to face with undead King seeking human parts to devour and regain strength. Now their only hope for survival lies in the hands of the treasure hunter Jack Wells.

“Day of the Mummy” big named actor attached to the project is Danny Glover. Now, Glover isn’t the Indiana Jones type Jack Wells. His character Carl is a wealthy collector of the finer things and hires Jack, played by William McNamara, to bring back the Codex Stone for him. Glover’s role is a bit odd as he only interacts with Jack through a technology advance pair of wearing glasses that has built-in microphone, video camera, and satellite reception. I’ve known the Lethal Weapon and Predator 2 actor to be more of an interactive professional with other actors and actress around him. For Glover to play an isolated role with no one else in a scene with him takes his stardom away from the movie. He might have been better being the lead character of Jack Wells.

Speaking of the hidden video camera glasses, the film’s perspective majority plays through the eyes Jack Wells. The effect comes off like an adventurous amusement park ride rather than a found footage film where the you explore a cave and strap into a hydraulic seat and give whipped around while a movie screen plays through the action. Part of the adventure amusement park ride feel is due to Carl’s in-screen image that pops up inquiring about the diamond every so often. The only thing missing from this ‘ride’ is the 4-D effects. Now, this perspective makes the film naturally unique, but also takes a bit of maturity out of the plot. Yeah, the film profane dialogue tries to spark life into, but the first person effect can be more effective if a more grotesque view of events comes across one’s sights. 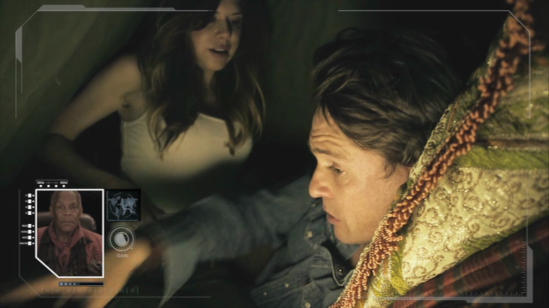 The sophomore film of director Johnny Tabor deserves to be recognized as a fair attempt at a genre that doesn’t spark any life into audiences. One thing that would have helped would have been to fill in the plot holes. The reason the team of archeologists venture to Neferu’s tomb was the result of a recovered video of another archeologist who found the tomb before them. The question is, how did the video get recovered in the first place once the first archeologist disappeared? How is Carl’s satellite feed still working in a sealed cave? Questions like these are annoying and baffling even if the logic is skewed just for the sake of a interesting story.

Along with Glover and McNamara, the cast rounds out with “The Black Water Vampire’s” Andrea Monier, Brandon DeSpain, and Robin Steffen, and along with Eric Young and Michael Cortez. A fine cast with loads of talent behind them, but Tabor’s mummy film entry lives up to others in which fall short of horrifying and thrilling. The hopes of fresh air are stiffened with mummified rotting remains of the past. The perspective is unique and welcomed, but could be fine tuned sieze an opportunity to scare the pants off audiences. The wait continues for a mummy movie to resurrect the floundering, most likely currently defunct, genre. “Day of the Mummy” is an interesting and entertaining ride non-the-less. Image Entertainment’s release hits retail shelves October 20th on DVD in the UK.

One response to “Trapped in a Tomb of Evil! Day of the Mummy review!”