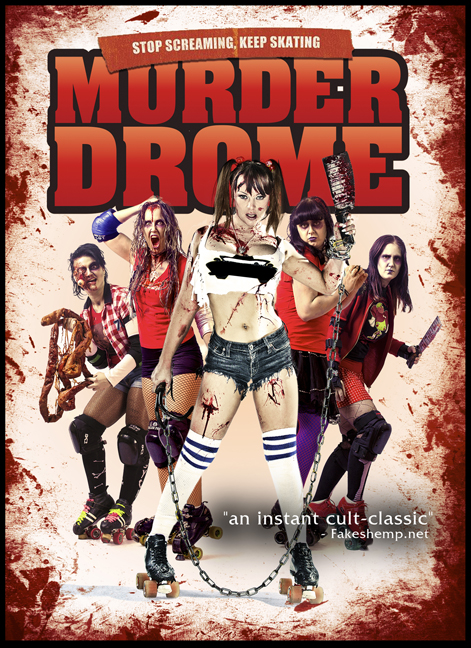 Cherry Skye and her all girl roller derby team, The Alamos, find themselves gravely threatened by a summoned vengeful demon named Mamma Skate, the best and brutalist skater from the MurderDrome rink 20 years ago who was viciously murdered ritualistically by a Satanic-obsessed rival. Called back from Hell by a mystical charm necklace once in her possession, Mamma Skate rollerblades through the night, cleaving her way through the roughest of roller derby girls, and seeking to possess the soul of charm’s current owner, Cherry Skye, so she may live once again! 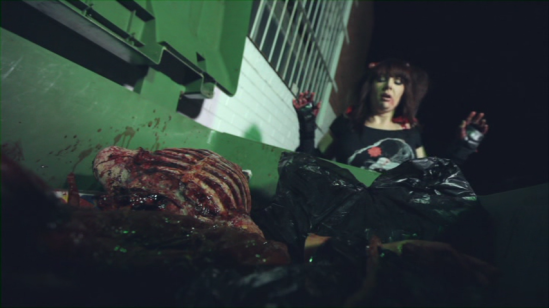 In 2013, Australian director Daniel Armstrong had a vision. A vision that includes skimpy-cladded, brazenly jagged roller derby girls, a resurrected she-demon wielding a butcher’s cleaver, and a helluva lot of rock-n-roll! A joint effort between Strongman Pictures and a slow drip of miscellaneous funding constructs that very exact vision, originally not conceived to have been a feature length film. Writing along side Trent Schwarz and Louise Monnington, who also had a co-starring role, Armstrong’s rockabilly ozploitation is a blood diamond in the Australian under bush with kangaroo pouches full of ocker comedy and skater mayhem. However, Armstrong’s terrorizing roller-demon imagery sat on the edge of being nonexistent and his film suffers the associated consequences of financial hardships and production problems. “MurderDrome” has a vibe more akin to a music video with interjections of storyline in between various psychobilly laid tracks that’s perhaps a pure result of the film’s financial inability to fill the void, but the style’s unique outline contends strongly in independent or abstract cinema outlets. Aside from the atypical structure, “MurderDrome,” granted, has some sloppy and choppy editing that disrupt not only the opening credits, but also waters down a death scene or two and affects character motivations. 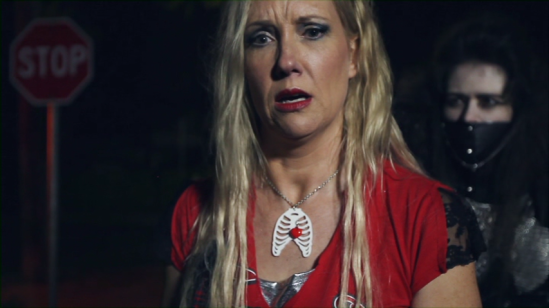 Australian accents are thick coming from an indigenous talent of actors led by Amber Sajben, a downright heaven-sent leading lady starring as Cherry Skye. With her cutesy pig tails, high-knee fish stockings, and an acute fascination with always popping bits of food in her mouth, her contrast with the dialogue-stricken antagonist and steel, chain, and blade attired roller-demon badass Momma Skate, portrayed by Be-On The-Rocks (Yes, you read that right), redefines the old phrase a game of cat-and-mouse that doesn’t quite fit the overall artistic style. When a group of rough and tough roller derby girls who elbow check others for the fun of the sport, some fight should commence without being said; instead, the characters who proudly carry the names Cherry Skye, Psych, Thrusty, Trans Em, Princess Bitchface, and Hell Grazer option to scurry without giving a second thought to bucking up to a sole skating murderess. Armstrong subsides more toward a comedy route peppered with a resilience attitude toward the situation with co-writer Louise Monnington leading the charge in her character’s crude humor, especially having Pysch, her character, note descriptively what exactly is ‘duck butter.’ Urban Dictionary has you covered if you care to look up the term. The cast rounds out with Kat Anderson, Rachael Blackwood, Jake Brown, Anthony Cincotta, Gerry Mahoney, Max Marchione, Daisy Mastermann, Dayna Seville, and Laura Soall.

Plot integrity is flimsy at best striking influentially at the development of certain characters, most importantly with villain Momma Skate. Her conjuring doesn’t go through the comprehensive ringer as the demoness just appears without establishing a connection with the charm necklace bringing her demonic lankiness above ground. Max Marchione’s The Janitor bares some importance that whizzes like air out of a rapidly deflating balloon as we learn less-by-less about this character throughout the duration of the film. The Janitor’s key mentoring role wavers, resulting in just one more confusion aspect into the blend. Remaining character developments are fairly cut and dry sans forgetting their eclectic attire, electrifying neon makeup, radical hairstyles, and overall lifestyles, but expansions upon the roles could have been more favorable for the Aussie production.

Camp Motion Pictures and Alternative Cinema skate the “MurderDrome” DVD right onto the North American market rink, providing the film’s first region one release. Extras are abundant with music videos from The Dark Shadows and other bands, a gag-reel, and a behind-the-scenes special effects featurette. The 72-minute feature is presented in a widescreen 16×9 aspect ratio that’s a bit hazy at times on the grayscale, but adds charm to the bargain bin brimstone fire and smoke computerized effects that truly defines Armstrong’s slasher as a campy ozploitation with Italian Giallo undertones and a supernatural core. “MurderDrome” rocks, literally, with great pyschobilly tracks from The Jacks, The Sin & Tonics, and The Dark Shadows to name a few of the head banging headliners on the soundtrack in the confines of a cavity heavy plot for a film more suitable as a music video than a feature flick. In the end, “MurderDrome” provides an endearing look upon horror even with all the obvious flaws, but renders some nice moments of searing barbarity overshadowing, just slightly, some of the misfires. Lastly, if you like girls in skates, who never take them off at any point, then “MurderDrome” is right for you!

Buy “MurderDrome” on DVD at Amazon!

2 responses to “Evil Rollerblades Over Your Neck! “Murderdrome” review!”