Brought before an intergalactic sentencing, a chaos-driven cyborg faces extreme persecution for committing heinous acts across of destruction and death amongst the galaxy, but desperately escapes on a small shuttle pod aimed directly for the planet Earth. The cyborg craves massive amounts of energy to contact others of it’s species for world domination and also needs to feed off of animal flesh to sustain. The local anarchist Dylan and her friend Eddie team up with a alien enthusiast and a provincial cop to thwart human annihilation as the cyborg assimilates the townsfolk into it’s own flesh hungry minions, doing the bidding of constructing a solar system reaching power source to create a space antenna. The world’s hope relies on a pair of anarchy subversives to stop a monstrous sheborg who believes chaos will provide for planetary obliteration.

Its Bloggin’ Evil has been around the bush a few times with director Daniel Armstrong, a name known very well here by previously reviewing two of the filmmakers films under his Strongman Pictures label, the 2015 wrestling-sploitation “Fight Like A Girl” and the slasher on blades “MurderDrome” from 2013, and there has been much appreciation for the ballistic, ass-kickin’ carnage and indie horror mayhem Armstrong is so strongly passionate about in his films. The 2016 “SheBorg” is no different as the film revels in many of the same feral totalities. The Australian writer-director favors the 80s-90s science fiction and horror cultural elements for not only his earlier works but also for “SheBorg,” cherry-picked specifically for the mechanical madness. From “Star Trek,” to “Ghostbusters,” and to “Back to the Future,” “SheBorg” affectionately homages these films through the dialogue in an explicitly melee narrative that oozes with crazy, feasts on the flesh, and gorges on heartily on dismembering and assimilating all in a path to geek fandom.

Dylan lives to subvert the establishment, even if that means derailing her politically obsessed, sorry for excuse father, Mayor Jack Whiteman, and the self-indulged agitator is played by Whitney Duff alongside “MurderDrome’s” Daisy Masterman as Dylan’s best Kung Fu knowing mate Eddie. Duff and Masterman are a solid budding duo who can expel eccentricity and calmness as a single, combative unit against an seemingly unstoppable mechanism of man killing, the Sheborg. The mechanical alien is mechanically performed by another “MurderDrome” casted and “Fight Like A Girl” actress Emma-Louise Wilson. Wilon’s robotic coldness sounds actually very Russian in performance, as if the Eastern Europeans were gearing up for war with killer, flesh eating cyborgs, but Wilson’s contrast to the uncouth Duff and Masterman tagteam is comedic bliss that symbolisms freedom over tyrannical subjection. Sean McIntyre, Mark Entwistle, Louise Monnington, Jasy Holt, and Tommy Hellfire fill in the rest of the “SheBorg” cast. 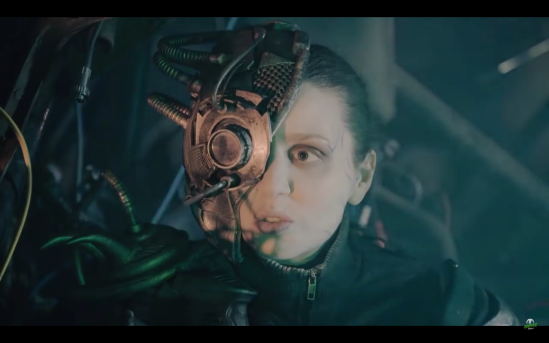 Labeled as a Neo-Pulp sci-fi, horror film, “SheBorg” encapsulates the essence of a schlocky B-horror, charmed with two-bit practical and visual effects. Yellow alien blood sprays and cascades like neon Kool-Aid, the assimilated have oversized and gaudy optical lens over one eye, and there’s also some eye popping, heart ripping, and dog eating gore to appease every facet of a modern sci-fi horror. Once titled “SheBorg Prison Massacre” and then retitled to “Sheborg Puppy Farm Massacre,” Armstrong drops the ancillaries and simply presents his Daisy Duke-cladded killing machine film as “Sheborg” that continues a trend, whether intentional and ill-conceived from selective viewings on my part, of having a heroine in the lead role, such as “Fight Like a Girl” and “MurderDrome” with the latter involving an all-woman roller derby gang. Armstrong’s seemingly trademarking his films with rebellious women, whom are at odds with the world around them, and are coming out on top hauling away being more of a kick-ass warrior than before the a nemesis made the scene. 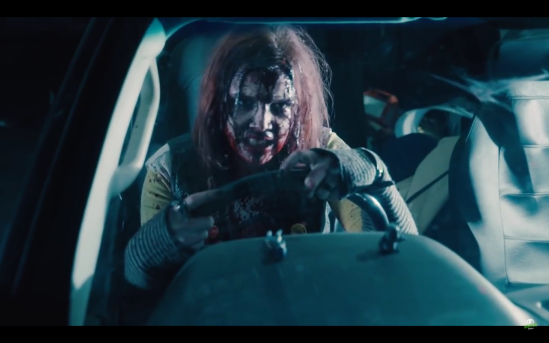 “SheBorg” is now available on Blu-ray courtesy of WildEye Releasing and MVDVisual. The 1080p resolution in a widescreen 1.85:1 presentation release has an underwhelming image quality. Details flutter sporadically in the woodsy locale in and around the puppy farm and night scenes have coagulated blotches of the unsharp nature. A few sequences turn out brilliantly poetic like when SheBorg frightfully exits through a mist-cloaked, open aired windshield of one of her three junkers turned into a makeshift solar system communicator. The 5.1 Stereo works for the budget, but while the punk rock score by KidCrusher befitted the anarchist lead, syncing with the rest of the film was far from being symbiotic. Dialogue was clear enough and ambience was fine, even if it was slightly over-exaggerated. Bonus features include a medium-length Behind the Scenes documentary that has engrained interviews with director Daniel Armstrong and selective cast; the BTS-feature is more tell all of Armstrong’s visionary mechanics and where he pulls inspiration from. There are also music videos and trailers. Resistance is futile as “SheBorg” is a must-see cybernetics battle royal in the realm of Ozploitation.