Washed up and dishonorably discharged Navy SEAL, Lieutenant Warren Carr, is haunted by the tragic death of his family and can’t manage to stop kissing the bottle, but when a Navy Lieutenant Commander offers him an olive branch toward redemption, one that involves facing the wrath of virgin blood thirsty demons in a Mexico bordering town called Jack County, Texas, Carr reluctantly accepts the black ops mission. Recruiting a pair of buddies of equally disgraced SEALS, Whiskey and Red, the three men go deep undercover as a bikers and join forces with an established Jack County biker gang to put a stop to the demons from spreading beyond the small town’s limits. 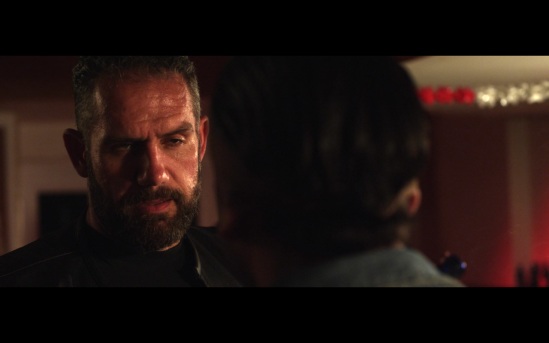 A good rule of them to live by when flipping through your DVD and Blu-ray library is if the film’s title reads and sounds like juvenile garbage – chances are – the film itself will be the same caliber, but there are diamond’s in the rough. For example, till this day, I still believe 2007’s “Shoot’Em Up” is one of the worst titled films, but the Clive Owen and Monica Belluci gory-action shoot out is great fun and undeniably attractive. Okay, so maybe that particular movie is a bad example, as “Shoot’Em Up” sounds pretty rad even if my 3-year-old daughter could have brainstormed a better title, but how about the AK Waters’ story, Charles Roy penned script, and Jeff Reyes directed film “Navy SEALS v Demons?” The common misperception is that a film entitled “Navy SEALS v Demons” must be an intentional farce, but is, in fact, a serious film about crotch rocket demons in search for pure virgin blood and three defamed Navy SEALS undercover as bikers who are hired for the black ops mission to take them out without support or backup. Demons weren’t the only prey of the American beloved, ass-kickin’ Navy SEALS as AK Waters, on the heel of Demons, had pitted the elite force against the living dead in a film entitled, you guessed it, “Navy SEALS vs. Zombies.” Put a KIA on the heads of demons and zombies, right up there with Osama Bin Laden, as our unsung heros can take on natural and unnatural enemies.

Built like a mountain Mikal Vega heads the charge as Warren Carr. Vega, with a resume that credits him a military or bodyguard typecast actor in some of Hollywood’s blockbuster films such as “Transformers: Dark of the Moon” and “G.I. Joe: Retaliation,” breaks from being a jughead extra for Michael Bay films and found a way to be a jughead lead actor in poorly produced nonsense filmmaking that has reared it’s ugly eye-sore head in horror films. By befriending AK Waters, Vega begins his career as a D-list actor with “Navy SEALS vs. Zombies” and working his way from there. Vega has potential and the talent, even if his talent’s rough and shaky at times. Alongside Vega are his two on-screen commando bros, Matthew R. Anderson (Red) and Les Brooks Jr. (Whisky). Together, the three don’t have great chemistry with no real bond forming that Military unspoken code of whether they live or die value. Liana Mendoza plays the semi-quasi female lead opposite Carr; her role of protective stripper mom doesn’t provide that one-on-one connection with Carr, especially since after her nipple-patch covered, incoherently edited lap dance for Carr upon his arrival into town was less than just okay (she’s much better in “Zane’s Sex Chronicles”), when her character is sorely underdeveloped to just be a waste of space and a fly on the wall. Lastly, there’s “Super Shark’s” Tim Abell as the ACES, special government agency whose acronym is never spelled out, acting head director Max Martini. Abell’s scenes in the command center are rather detached from the rest of the action. Abell does a fine job being the tough man in charge to a bunch of bewildered agents who look like they’re all sitting in a VFW mess hall, wondering how to keep operational their recon drone over Jack County, but Abell’s scenes are almost like a wasted effort in trying to sell his band of brother loyalty to Carr.

“Navy SEALS v Demons,” that’s not a typo in the abbreviated versus by the way, must have had storyboards that were shot from illustration-to-illustration because smooth transitions between scenes were anything but present. The 85 minute film also felt frustratingly rushed; for example, a portion of the finale tried to convey a death, a betrayal, and one other important antagonist upper hand all in 20 seconds of short clips, harshly edited together as the filmmakers said, “screw it, let’s just get it done.” The death of the major character didn’t get the respect the character deserved and I would be pissed if I was that actor, the betrayal comes out of far left field in such a brief scene, and the other scene, which I won’t go into details in case you want to actually watch this movie, goes relatively unexplained as well, but one can conclude that the dark powers of the head demon are Pied Piper-ly powerful. Special effects had some brief gory moments, all the demon makeup was obscured by off-screen voiceovers, structure impediments, and biker helmets, and to be frank, I’m still upset that Liana Mendoza, whose inherently sexy playing a sexy role, used pasties and the direction during the lap dance was to screen more of Vega’s mug of contempt as if the filmmakers themselves tried to intentionally censor themselves. 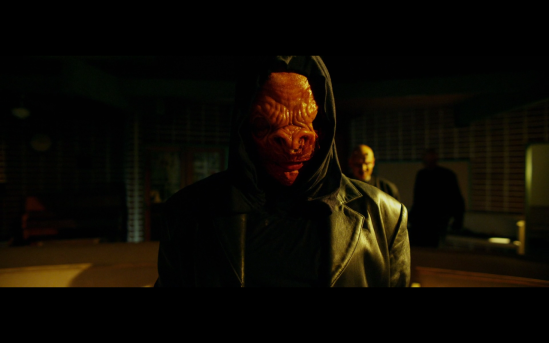 Ripped Boxers Entertainment and MVDVisual’s “Navy SEALS v Demons” goes to battle on Blu-ray home video. The Blu-ray’s image quality is actually quite good with an AVC encoded 1080p transfer presented in a 2.31:1 ratio. Color levels are balanced where needed, especially in the day time sequences, and skin tones naturally favor Carr’s middle-aged definition and heightens Mendoza’s ethnicity and womanhood. I can’t say the image quality did any justice to the demon makeup, rendering the oddly reddish hues on the shoddy latex an obvious quick job. The Dolby Digital 5.1 English only track has very little bite with some loss around the surround sound and the dialogue isn’t always in the forefront and clear. There are no extras on this release. “Navy SEALS v Demons” is, sadly, one of those bad low-rent movies with a low-rent title on a fairly good Blu-ray release and while Mikal Vega and Llana Mendoza share the intensity the story desperately needs, majority of the remaining is stale as week old bread, except for best part of the whole movie when Mikal Vega slaps around a lowlife biker in a barroom brawl. What will be AK Waters next versus project? Navy SEALS vs Vampyres, anyone?