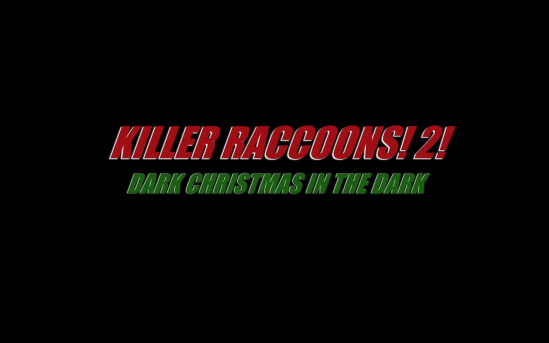 Ten years after the campsite mayhem of a raccoon attack that supposedly killed everyone and incarcerated Ty Smallwood for a decade in the wake of a governmental coverup, Ty, who now goes by the name Casey, is released from Prison located in Independence, Colorado and meets up with his pen pal Darlene, the younger sister of Ty’s girlfriend who was murdered by the killer raccoons. The two board a train on Christmas Eve heading toward Washington D.C. where Casey will attempt to explain to Darlene just how his sister died, but the thought dead former camp counselors, conscripted by the sinister Ranger Rick Danger, team up with elite mercenary raccoons to hijack the train to usurp a military weaponized satellite manned by a trained raccoon astronaut to inflate their offshore bank accounts. With the assistance of a train porter, Casey must recall his raccoon stopping abilities in a convergence that reunites enemies and friends back together in once again a diabolical raccoon assault.

The not-so highly, yet enthusiastically wish granted anticipated sequel you never knew you wanted to “Coons: Night of the Bandits of the Night” is here! “Killer Raccoons! 2!” dusts off the taxidermized black masked and ringed tailed trash can diggers for another round of loco-motional chaos, written and directed by Travis Irvine. Though the two stories span only ten years apart, the precursor film and its predecessor are released 15 years apart with “Coons” being released in 2005, hitting under the radar of retail shelves by the indie distributor, Troma Entertainment. Irvine’s follow up film, which is also known by “Killer Raccoons 2: Dark Christmas in the Dark,” is a hot take spoof on one particular insane Steven Seagal action film from the mid-90’s, when the 7th-dan black belt in Aikido Steven Seagal still had his slim build and audiences still took him seriously, also while giving minor homage to iconic action films over the decades. Irvine’s Ohio based production company, Overbites Pictures, finances an over-the-top critter action clash with ample dick jokes and a crude sense of admiration.

On any given sequel, returning actors would step back into their character shoes, donning, once again, the persona woven specifically for that role to reignite the same soul for a new plot, but with a few titled “Killer Raccoons! 2!” the customary guidelines and conventional means of filmmaking become shot out of the sky by a giant dick shaped laser orbiting in space. Thus, comedic actor-writer Yang Miller replaces Lehr Beidelschies as Ty Smallwood, James Myers replaces Nic Maier as the camp counselor turned eunuch and number one bad guy, and Mitch Rose replaces Brian Kamerer, being the best Eric Bogosian impersonator that can be. I bet now you can guess with Seagal flick Irvine spoofs! Yet, some of the original cast returns, such as Zach Riedemaier, Kasey Cooper, Colin Scianamblo, and Tom Lyons, bracing themselves for another interspecies skirmish. The new and old cast offer a seamless one-two punch of thirst quenching pasquinade, but in all fairness, I never saw “Coons: Night of the Bandits of the Night” and don’t really have a point of reference, but the confluence of confidence surrounding these outlandish performances doesn’t perpetrate a sense of disconnect. New roles played by new blood also courses through the sequel’s jiggly veins and what better way to fight raccoons than with a hedgehog; legendary porn star Ron Jeremy harnesses the dim-wit power of Lord Helmet from Space Balls, becoming military brass with a gaudy general’s cap and an aloof sense of what’s going on. The sequel rounds out with Briscott Stevenson, Michelle Weiser, James Adomian as a version of the presidential hopeful Bernie Sanders, and comedian actor Ron Lynch as General Negligence.

By now, if you haven’t guessed, “Killer Raccoons! 2!” is a rumpus-raccoon mockery of Steven Seagal’s all aboard follow-up of anti-terrorist tactics in “Under Siege 2: Dark Territory.” At first, Irvine sets up Ty Smallwood’s eventual release from prison and coming to know his pen pal, Darlene, while also running into a few other character to which one conversation leads into how prison turns you into a completely different person, a poke in humor at itself for having not the same actor play the lead. The initial backstory ran through the typical “Airplane!” farce with a few more dick jokes, such as the satellite being christened PEN15. Get it? Once the train chugs along and the introduction dust settles, Irvine nearly does a scene for scene with the Seagal sequel, capturing almost identical shots within a familiar storyline. This hilarious reenactment flatters the only way a low budget knows how with poor composite effects that add to the hilarity and Mitch Rose really nailing Eric Bogosian; I can’t stress that enough. There are some performances that are too over over-the-top, stepping more toward terribly mindless and silly of unintentional inimical aftertastes. “Killer Raccoons! 2!” doesn’t take itself seriously and we shouldn’t take it seriously either in this fun feed error Xerox copy of “Under Siege 2: Dark Territory” run amok by pesky raccoons!

The fury-bandito train ferociously pulls into the action-packed and explosive station come October 1st onto DVD from Indican Pictures. Already released theatrically in the mid-west and on digital platforms from this past July, “Killer Raccoons! 21” will claw and scratch a foundation before physical format that will resonate more older audiences familiar with the 1995 Seagal film, but potential viewers should trust in the diversity Indican Pictures strive for and know that “Holy Hell” was an equally profanely funny feature raising eyebrows and regurgitating laughs. Since the screener is digital, there will be no critique on the A/V and there were no bonus material available from the forthcoming DVD, but there is a short bonus scene after the end credits. The broad-based humor of “Killer Raccoons! 2!” can cause long-lasting laughter from that cull the most mediocre action film and serve it up as the base for a critter-infested gun-toting comedy-thriller!

Available to rent on Prime Video!