Jennifer Benson’s life is a storybook fairytale that’s embraced by her close sister, exalted by a sweet, kind husband, and excited with the news of an upcoming baby. Yet, all good things come to an end and in Jennifer’s case, in a devastating tragedy when everything and everyone she held close to her heart is unexpectedly wiped away within a single year. Physically injured and suffering from depression, Jennifer withdraws from family and friends inside an empty house, sinking lower into despondency, and letting bills and the house upkeep slip through the seemingly insignificant cracks. Jennifer eventually decides climb up a little out of her rut by cleaning up and letting go of some sentimental materials that leave painful memories by storing them in the unfinished basement, but when the basement door jams and won’t open, Jennifer finds herself trapped in a subterranean state with a large thunderstorm dumping rain that’s seeping from the basement walls, plumbing, and the ground. As the torrential rain continues to fall, the water level continues to rise with no way out. 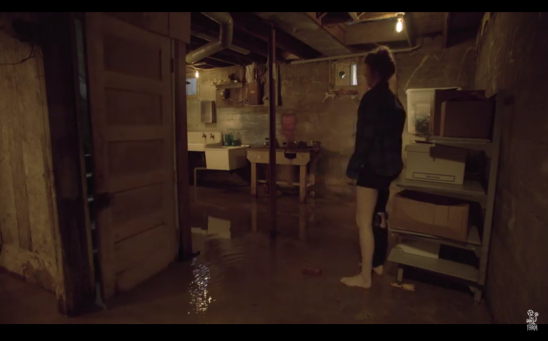 Get ready to hold your breath in Barry Andersson’s agog of metaphorical poignant survival, “Relentless.” The filling of the fish tank mender is the director’s first and only release of 2020, following his 2019 releases of the historical drama, “The Lumber Baron,” and a 1940’s set sleep deficient thriller, “The Soviet Sleep Experiment.” Andersson continues to tell stories of intricately varied human responses as the filmmaker pens “Relentless” surrounded by themes of reactionary and recovery paths toward death with the film echoing more so with Andersson’s introductory “The Lumbar Baron” on a much smaller scale in terms of cast and setting. The story is set in or near Minnesota, a Midwest state prone to some of the United States worst flash flooding hit areas, and Andersson crafts his creative juices with that in mind to mold a symbolic cognitive descension stemmed by escapism inside creature comforts. Deodand Entertainment and Andersson’s filmic workshop company, Mogo Media, designate as the production companies.

“Relentless” indurates around being a one woman show with Rachel Weber spearheading the subject of crippled and downcast Jennifer Benson. Weber, whose worked briefly with Barry Andersson in “The Soviet Sleep Experiment,” has to operate Jennifer animatedly in a near voiceless, tacit role to simulate one alone with their thoughts and emotions. Only flashbacks limn with dialogue present the state of Jennifer’s woebegone mind as she goes from despair to reluctant acceptance by reopening the wound of concealed painful memories. Weber fulfills every inch of empty space with a tinge sorrow in some way, shape, or form but doesn’t quite convey the impact well enough to fortitude a presence. Weber’s post-flashback expressions deflect the corpus theme with no real tell of how Jennifer actually feels as she stands over a box full of memorabilia of what should be inducing whether a pensive sadness or vitalizing inspiration as she goes through an unbalanced reel of memories that include bedroom book snuggles with her sister at young age or survival life lessons with her father to up at the moment of what was supposed to be a joyous baby shower occasion that turns unexpectedly into tragic point in her life. Though the story acutely restricts the camera on Weber, the unfolding flashbacks ultimately tell the story from the past that includes stint performances from Charles Hubbell (“The Bitch That Cried Wolf”), Anna Hickey, Bea Hannahan, and Presley Grams. 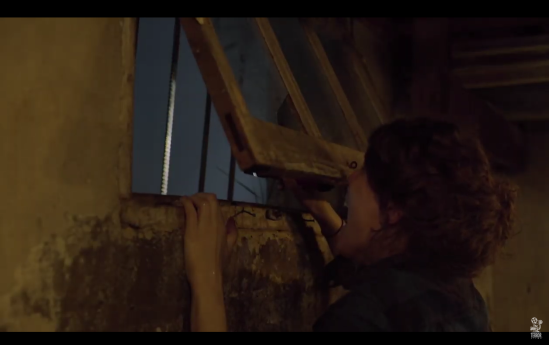 “Relentless” has thought-provoking messages splayed up, down, and all around it’s encased four-walled theme of, literally, drowning in your own self pity and digging yourself out of a hole of depression. The water that gushes into the air tight unfinished basement represents the rising fathoms of depression that initially trickle in harmlessly enough, but the longer the despair drips go unchecked, as noted when Jennifer reaches out to nobody up on the top floors of her house and would rather recap wedding photos in the first act, the more intense the cascades can become when your submerged in from head to toe. Along Jennifer’s rather stagnant perilous journey, sitting on top of work benches as a hapless invalid and rummaging through miscellaneous items, she opens and goes through various storage boxes of her past that she carefully tries to keep dry by continuously moving the boxes out from the low-lying waters. Each box evokes a single memory from her past fashioned in an unchronological order and stews in a melting pot of stirred emotions that work backwards from melancholy to hope to, eventually, in my opinion, an inescapable suicide. My subjective take on Barry Andersson’s open-ended culmination is purely speculative as Jennifer’s struggles for survival may all be for naught, even in the evidence of the character leaving behind a note for storm survivors, or whomever, to collect staggering into what could be Jennifer’s tomb strongly suggests that particular path. That’s what admirable about intense thrillers, such as “Relentless,” that teases an unwritten coda for those to survive and tell the rest of the story, woven with their own personal singularities, but Andersson’s film, heavy in metaphors, lacks spirited vitality in a somber stroll through what’s innately a human fear: death.

Basements continue to retain their bad rap in the traditional horror sense as well as in Terror Films’ release of Barry Andersson’s survive-or-die succumbing to mopery in “Relentless,” distributed digitally across multiple platforms. Rigorous self preservation might be watered down, but the stagecraft and production design is top shelf quality with a simple set of a well dressed dank and bare basement where streams of water rush into from the barred awning windows and waterlogged plumbing. The basement in itself is a character of misfortune, a cell of rehabilitation, and is just simply effective in a cinematic sense without seeming overly menacingly but rather like every other basement in the world. With the digital screener, there were no bonus material included nor any bonus scenes during or after the credits. Don’t expect a nonstop nail-biter that aims to fill your lungs with asphyxia inhaled water; instead, sympathy or empathy will play significantly in “Relentless'” success with an aggregating flurry of thoughts generator in a post-traumatic vicissitude.

“Relentless” included with Prime Video and available for purchase!