When a medical research team scouring the Himalayan mountains for a miracle plant that can cure cancerous cells disappears without a trace, a second team, armed to the teeth, venture up the harsh terrain to locate them and recover any evidence of the mythical plant dubbed the Yeti plant.  They discover the research station has been abandoned with examination equipment and notes left behind.  With a storm brewing and the topography jamming their radio signals, the only thing to do is push themselves to setup a triangulated perimeter in order to boost the radio strength and comb the mountainside for the plant before hunkering down from the storm, but little do they know that they’re being hunted by a primordial and fabled creature, the Yeti, stalking prey to protect his uncharted, stuck in time territory. 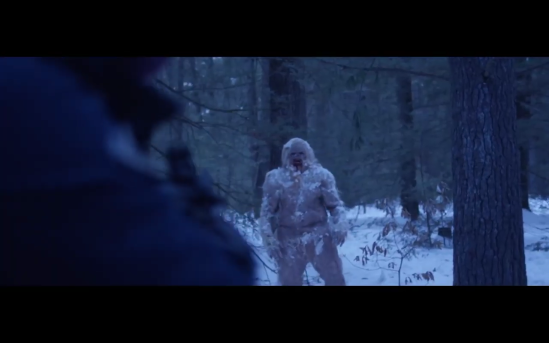 As the third film to be titled “Abominable” in the last 15 years, this particular 2020 creature feature on the ever elusive and mysterious Himalayan Yeti is helmed by the 2018 released scurrying little feet of those mischievously cursed “Elves” director Jamaal Burden might not be at the top of your search engine results, but if you search “Yeti,” you’ll see High Flier FIlms aims to detach from the previous moniker inhabitants.  Burden’s modestly budgeted, internationally shot, sophomore film returns the filmmaker right back into the mythic subhuman category with yet another timeless storybook creature living in legends slithered within the shadowy veil from a script written by J.D. Ellis (“The 13th Friday”) that’s of indie caliber with a touch of jaw-ripping, blood-sprayed snowy carnage in this post-Holiday, winter-horrorland super beast feature.  “Yeti” is the latest in a long line of horror schlock produced by Justin Price, Khu, and Deanna Grace Congo under Pikchure Zero production company and is filled in St. Petersburg, Russia.

Confronting opposite the terrible Yeti is a cast of alien talent without so much as a recognizable genre name or face to anchor “Yeti’s” marketing success, beginning with Katrina Mattson in her debut lead performance as a young scientific assistant to the terminally ill-fated Dr. Helen whose played by Seattle born Amy Gordon.  The body of dialogue or visual communication didn’t flesh out Mattson’s assistant’s strong yearning to support Dr. Helen’s obsession in rooting out the never before seen Yeti plant other than stating she will do anything to help the Glioblastomas-doomed doctor by whatever means possible.  The disconnect in dynamic between the two supposed friends is not well established and completely melts away faster than the Himalayan snow on a Summery day when the two barely reunite after separating from the abandoned research station.  They’re each accompanied by a couple of mercenaries hired to be an armguard, for a reason why scientists needed M16 assault rifle toting ex-special forces types is beyond me, but actors Robert Berlin and Brandon Grimes serve as such, adding a tinge of military machoism that could have been amped up more against a Jason Voorhees worthy disappear and reappear act Yeti with the given inherent superhuman strength. Berlin wildly over performs at times just spouting out his lines as if reading off an instruction manual. Plus, his character is poorly developed as a money hungry Yeti hunter with an extremely naïve and arrogant personality to the point of yelling in the Yeti’s face when the Yeti is clearly not dead or incapacitated.  Victims pile up with the remaining cast becoming Yeti chow, including supporting performances from Justin Prince Moy, Magdaln Smus, Victir Ackeev, J.D. Ellis, and with Timothy Schultz passing as the scraggily titular abominable snowman.

The reason why Burden’s “Abominable” might not be numero uno on your search engine results shouldn’t be total surprise, but even “Yeti” may not produced the same desired outcome.  Aside from not having any grade of star power attached to it, audiences will be awkwardly thrusted right into a perplexing point in the story of dropping us right into complication with a rescue team entering the abandoned Himalayan station and, from then on, a straight forward, uncompelling path of infinite chase with the ball incessantly in the Yeti’s corner trounces on any kind of hope or resistance for survival.  The man-in-a-suit Yeti and makeup effects are not too bad as an admissible effort for an indie production and what’s even more impressive is how Burden felt confident enough to actually show the creature. There have been Yeti, bigfoot, sasquatch, etc., films aplenty of that stray away from displaying much of the hairy beast, only providing glimpses of the large feet, ape-like hands, or fanged teeth to represent a presence, but for “Yeti,” the creature is proudly displayed in all it’s full glory despite being half hairless with patchy spots of snow-stuck fur. Joe Castro, an effects guru for off-the-wall horror for the past three decades with credits including “Night of the Demons III” and “Blood Feast 2: All U Can Eat”, created the Yeti suit while also dishes out some surprisingly decent gore effects that have a real palpable face mangling fetish and so bloody great. On the other hand, the visual effects and props are an abomination in themselves with obvious toy guns and lack of continuity and cause and effect visual effect givens.

Is “Yeti” another filmic miss on the missing link or can there a slither of entertaining gore with creature lucidity amid a trite script? I do think the latter in Jamal Burden’s “Abominable” from High Flier Films slated for a January 11th DVD release in the United Kingdom. Producer Khu is also the director of photography, using the steady and handheld cams to capture a heap of medium and closeup shots without seizing the opportunity to get a lay of the actual snow covered forest which the characters are heaving hot breaths in the frozen air. Khu does exude the fact of actual frigid conditions with the use of a bluish tint in every outdoor scene. “Rave Party Massacre’s” Matt Jantzen composes a tense-situated, industrial epic score that doesn’t fit “Yeti’s” marginal story structure and can be nearly rave-like and repetitive at times while overpoweringly robust. Sound design is another favorable aspect in “Abominable’s” chaos with a discernible range and depth, especially when working with crunchy snow and a lot of bulky clothing that can be heard rustling when characters move around frantically. Gore scenes are laced nicely with gooey, gushy sounds that can be tangibly slimy. There were no bonus material included with the digital screener nor where there any bonus scenes during or after the credits. The great Yeti adaptation still eludes our ever curious eyes as “Yeti” quenches a only blood thirst through an over-trekked, over-defiled snowy path of the subhuman subgenre.