In an alternate universe, Charles Manson didn’t get incarcerated for his heinous cult murders. Instead, the sect creating and drug taking Manson goes deep underground with his acolytes after committing a vile crime that becomes the foundation of a nationwide race war. Manson’s followers preach hatred and distain for the blacks and rape their own white women to produce an inbred underground white community. When Manson falls ill and dies a violent and horrible death, he leaves behind a sole child, Kendra Manson, in the most intolerant racist hands of Dan who raises Kendra with a flood of mind altering hate for non-whites. When Dan receives a subconscious message from Charles Manson to surface from the bunker and rule the world with white supremacy, they’re met with a surprise that black people are the majority and whites, known derogatorily as albis, are the lower, socially mistreated class subjected to the same race discrimination during Charlie Manson’s above Earth reign. Separated from her bunker family, Kendra becomes lost in what she perceives as an upside down world, but has is opened her eyes to the real subject matter on race?

“Honky Holocaust” is without a single doubt a Troma masterpiece. Director Paul McAlarney’s shocking bizarro world of racial social commentary is just not another run-of-the-mill message of inequality, but an contemplative insight of role reversal. The mirroring of the nastier portions of race discrimination from 1950s to 1980s has been set in the present day and extends beyond the usual racist America regions, that are typically Mississippi or Alabama, with the film set in San Francisco; perhaps the most tolerable and friendly city in the world set in the most liberal state that is California. While McAlarney’s spews the carnage and the vulgarity that’s very Tromaville worthy, the Boston director has written a thought provoking concept that’s masked in dick jokes, sex and drugs, and a girth of gory practical effects.

Maria Natapov takes the lead with her misadventure role as Charles Manson’s bunker daughter, Kendra. Natapov acts dumb and plays stupid when face-to-face with the very race her character’s been bred to hate for more than 30 years while maintaining Kendra’s naivety through the heat of racially tension moments. The restaurant scene comes to mind that’s a real eye opener in where Natapov walks amongst a barite group of black patrons and the scene sells the powerful reversal with Natapov’s unflinching performance. “Honky Holocaust” has a romantic side when Kendra comes under the safe haven wing of the racially suppressed Lucius, played by softly charming Constantine Taylor, and they team up to stop Kendra’s stepdad Dan, a role fitting for the film’s producer Lucas Fleming. When Flemings on screen, racist ooze just seeps from his portrayal of Dan, even if Dan didn’t sport a gaudy swastika belt buckle. Other characters pop in and out, some memorable, some not. Krisoula Varoudakis, Mauricio Viteri, and Thomas Delcarpio costar. 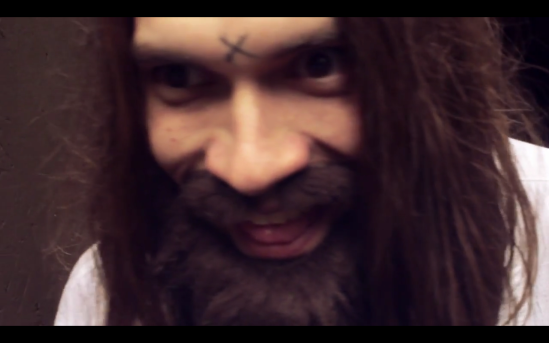 McAlarney’s 2014 offensive exploitation amusement ride starts gnarly enough with the director going through a monologue about how to make a film surrounding racism; all the while sitting on the can. Through his comfortable exposure of his manhood and the exaggerated flatulence filling the audio air, he painfully yells into a microphone about the birth of his idea as he discharges chocolatey waste into the toilet and sends off an unforgettable farewell by reaching behind him, scooping up some backside waste, and licking it into his mouth with the statement, “that’s some good shit” quickly following. McAlarney has successfully set the tone for “Honky Holocaust.” Troma’s renowned celebration of their bread and butter of tasteless cinematic garbage (which Its Bloggin’ Evil adores) certainly incorporates this social commentary gem, but McAlarney is more than what meets the eye. Beyond his thought provoking story, McAlarney has a talented production eye. With a micro budget being filmed mostly in the streets of San Francisco, McAlarney was able to construct an alternate reality and leaving behind a flawless perception that whites are truly the scum of the Earth. I’m not totally onboard the McAlarney train, however, as I became a bit lost in the character development near the end, especially with Kendra Manson, but I did like the path the character took, mowing down and massacring the primeval in order to rebuild a better future for all.

Troma Entertainment and CAV Distributing proudly introduces Bloddy Hammer Films’ “Honky Holocaust” on high-definition Blu-ray via a MPEG-4 AVC encoded 1.78:1 aspect ratio. The image quality is a mixed bag as none of the quality is consistent, familiar to other early grindhouse imitated features, but the unbalanced hues and, sometimes, lack of popping colors battle back and forth for quality domination. Early on, noticeable aliasing can be caught during the lynched scene, leaving less defined objects and creating chaos in the pixels. As the film progresses, outlines and textures get better, more consistent. The dual channel LPCM audio mix suffers horrible as the dialogue track is sorely underfoot with the ambient LFE overlaying place it’s robust boot right on the dialogue’s neck. Soundtracks are inconsistent as well, being too loud for comfort or being too loud for the rest of the implemented tracks who become lost. Bonus features have substance with a “Behind-The-Scenes Honkumentary” that’s a twitching handheld camera look at some of the film’s best scenes, deleted footage labeled “exterminated scenes,” and a video containing director Paul McAlarney pledging his allegiance to Tromaville. There are the usual Troma bonus pieces about protecting the environment and the film’s theatrical trailer along with Troma’s president, Lloyd Kaufman, giving his usual satirical introduction. The obscenities in “Honky Holocaust” mingle regrettably well with story’s racial social inequalities in a chaotic melee, pointing out the senseless violence and asinine nature in social jest. Paul McAlarney knew what he was creating from within the belly of the beast of his darkest comedy, even if the punk parader’s LSD-inspired trip through hell seems misconstrued on the surface.