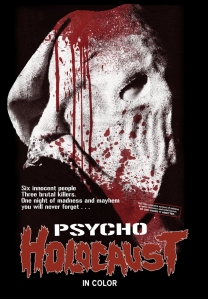 My share of horror films deriving from the victims of post traumatic stress disorder of war extends from Bob Clark’s golden oldie Deathdream to more recent no budget indies like Andrew Copp’s Quiet Nights of Blood and Pain.  The issue that always seems to arise in my thoughts when watching one of these flicks is can PTSD victims one day snap into a vicious, emotionless killer?    Examples of actual occurrences doesn’t come to mind (a few will hit me while I’m walking the dog most likely) and this lack of evidence renders me helpless agains’t opposing feelings about wanting to believe that the horrendous acts, such as portrayed in my recent venture Psycho Holocaust, can really take place.

Six friends embark on a getaway vacation to an isolated area lake house.  On the very first night, their getaway turns into a futile get away when three psychotic and evil men plan to toy with the group for as long as there is pain and blood to be given.  These violence junkies won’t stop, won’t be merciful and won’t let anyone live long enough to last a full day.

Shot as a grind house film and recreating many scenes from various exploitation films, Psycho Holocaust reminds us that our shock senses are still alive and kicking, but doesn’t bring much new to the chop block because, frankly, the meat, by now, is moldy and spoiled.  That doesn’t mean we still can’t enjoy the rot as long as it is sprinkled with spiced up seasoning and marinated just enough to make us forget that a bad taste from stale meat should be signaling our minds.  In non-metaphorical terms, Psycho Holocaust is just a more or less extension of some of the greats.  There bares a strong relation to Tobe Hooper’s The Texas Chainsaw Massacre as one of the three killers wears a sack over his head, wields a chainsaw while chasing prey through the forest and is called Pillowface; you can’t convince me otherwise that this character was not inspired by, oh I don’t know, Leatherface maybe? 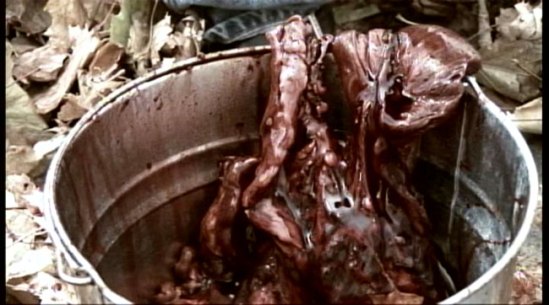 Like I aforementioned, Psycho Holocaust is shot in a grind house style.  What I don’t know, if the style was intentional; I’m going out on a limb and say it was.  The reason I have my doubts lies with shoddy post production:  ghosting, incorrectly synced dialogue, dialogue covering background music (which might not be a bad thing because the awesome Giallos Flame does most of the score!), choppy editing and distortions in the image quality.  All these could also contribute to the homage of a 70’s exploitation film as well!  To back up that theory, the DVD cover is rich in blood color and has printed, “Psycho Holocaust:  In Color,” which sounds pretty retro, yes?  Plus, the desaturation of color gives off that old retro feel but minus the cigarette burns.

Story always matters.  The six friends have a basic backstory and that is to get away for a weekend before their lives changes it all, but individually, I know “Mark” (who oddly enough sounds like Christian Slater) and “Talina” are having a kid, “Scott” and “Laura” don’t have anything going on and “Jeff” and “Sara” have not been in touch with their friends in quite some time.  The backstory on the three killers is vastly more impressive and sympathetic.  “Buddy” saw too much violence through his journalistic camera, “Carp” was trapped underneath dead fellow corpsmen and had to feast on their remains to stay alive and “Pillowface” was tortured to the point where they ripped off his face and he never gave in.  These guys went through hell and they end up being the bad guys in some ass backwards Shakespearean tragedy. 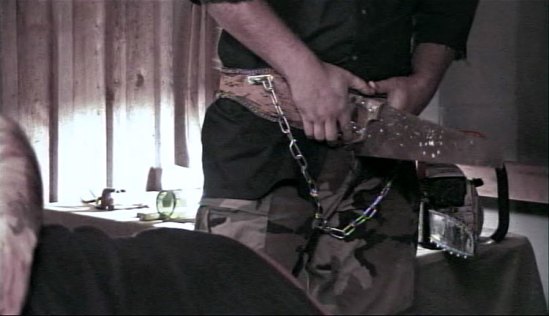 The final thought on Psycho Holocaust has to be either love or hate it.  The no budget quality will raise a lot of snobby noses, but there has to be a smidgen of appreciation for director and writer Krist Rufty love for old movies.  The special effects are solid and can be manageable on this no budget film, especially the effect of someone getting sodomized by a tree saw blade!  The DVD contents are very extensive on this MVD and Independent Entertainment release.  Look for Psycho Holocaust on DVD this coming Tuesday, June 21!  Happy Father’s day gift for sure!