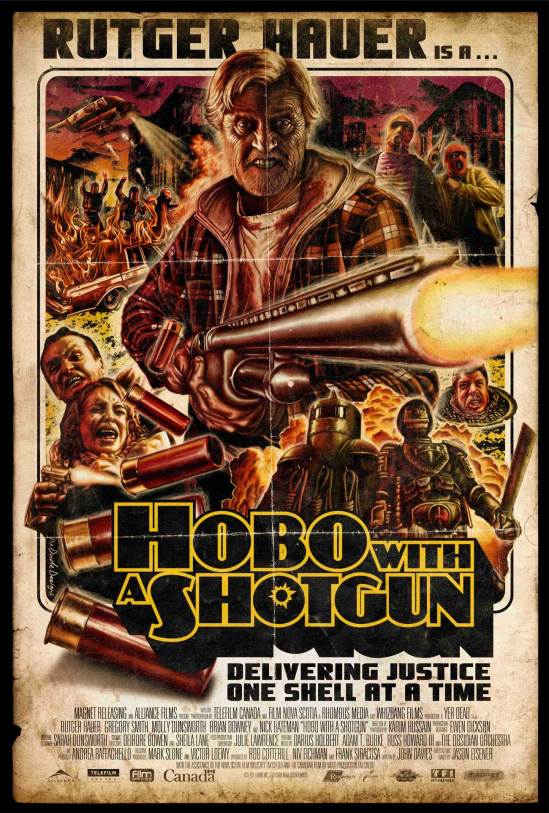 Just last night I was sparing with one of my editors for another review horror website about meaning behind the term “grindhouse.”  My editor believes that no such word should exist and the entire meaning behind the term is just a loo to generate business for studios looking to recapture a 70’s ultra-violent culture with in a cinema medium.  Whereas I believe the sleazy retro-fierce genre still lives and breathes today, spanning over 40 years.  Every genre goes dormant for some time; the zombie genre went dormant all through the nineties before making a ridiculous comeback at the turn of the millennium.  Whether me or my editor is right or wrong, the facts are undeniable that violent, exploitive and gruesome movies are still being produced today and being labeled a “grindhouse” film is still up for debatable grabs.  Hobo with a Shotgun is one of those violent, exploitive and gruesome films made in modern day.

A traveling hobo rides the rail into a wretched town filled with homeless exploiters, pedophile Santas, disrespectful murderous punks and a crime lord named The Drake and his two merciless sons Ivan and Slick.  All the Hobo wanted was peace and to gain enough money to buy himself a lawn motor from the local pawn shop  Instead, the town got to him pushing him over the edge causing him to buy a single barrel, pump-action justice delivering shotgun!  Even if you jay-walked, the Hobo took vigilantism one shell at a time.

Some may consider Hobo with a Shotgun to be an exaggerated spoof upon the, still arguable, “grindhouse” genre.  Others, like myself, theorize that director Jason Eisener’s film possesses it’s own contribution into the recently rekindled genre.  Beneath the spoof/fake trailer that was previewed for the 2007 feature Grindhouse, there’s an actual story that doesn’t sell Hobo as a heartless comedy.  The message of truth and justice is clear from a man who has nothing to lose – much like Frank Castle from Marvel Comics.  Hobo adds a cyber-punk 80’s feel that generally doesn’t include itself in the “grindhouse’ circumference; this addition contributes to the genre rather separating it.  Possibly making up for lost time in the 80’s?

Rutger Hauer is still a handsome Netherlander.  Soft baby blue eyes, sandy blonde hair and a grinch-like mouth makes him perfect for wielding a vengeful hand upon Scum Town, USA.  Hauer’s a big name even if if his film’s are little gems, but he isn’t the only star of the show.  You may recognize one of the bash brothers’ faces, Slick; Gregory Smith plays him and he awfully resembles the kid that bit the bullet in Mel Gibson’s Patriot.  Yup, that’s him.  Smith’s ruthless performance as the favored son of The Drake proves that short guys can have a tall ego.  Taking a flame thrower to a bunch of school-enthusiastic kids was a nice touch.  Slick’s brother Ivan, portrayed by Vanilla Ice’s preppy twin doppelganger Nick Batemen, is an inspiration to us all delivery cocky confidence and a, and I’ll quote my editor here, “hipster” style like no other.  Who else do you know that can slice and dice people with laced up ice skates and carry twin boom boxes for slaughter background ambiance.

The only real message being delayed is truth and justice, but done in the most radical way.  Hobo might have sensationalized by creating a town full of crazies in every possible way, but in the midst of all that is insane, hope will project and will overcome.  Magnet Entertainment Blu-ray release of Hobo with a Shotgun is a nice addition to anybody’s “grindhouse” collection and should be purchased right away just for the sheer fact of how rare it is to actually see a good “grindhouse” film now-a-days.  I’m still waiting on my copy of Nude Nuns with Big Guns.  Keeping my fingers crossed on that one!

2 responses to “Homeless Bum vs Evil! Hobo With A Shotgun review!”