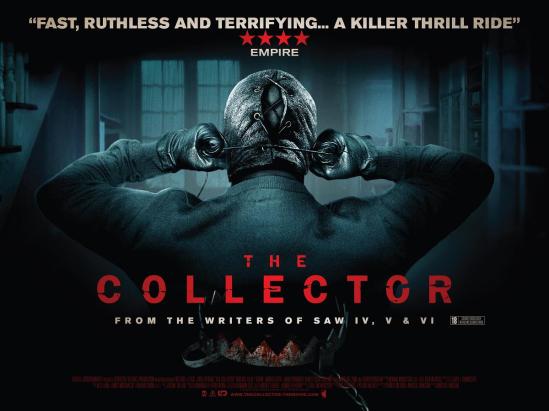 The Collector could be one of the next iconic horror villains of the 21st century.  You don’t see too many “repeat offenders” as you might have in the 80s and 90s with Freddy Kruger or Michael Myers.  Instead, you have Victor Crowley and The Collector – who else is out there?  There are probably more, but that is another topic I might have to explore later on in a separate topic.

The Collector feels like Saw – no doubt about that.  Since I knew the script was written by Marcus Dunstan and Patrick Melton, there were most likely going to be some similarities.  When I did some research, I saw that The Collector was a scrapped idea for a Saw prequel.  I’m sure if that ever came to fruition, nobody would have noticed this flick.  The Collector can stand by itself without the the help of Jigsaw, but the traps are all there; however, we don’t have the sob story of the cancer ridden engineer.  Instead, the killer has little to no mercy and sadistic beyond rational.  The Collector has no backstory and that is welcome – we don’t need to know his name, his origin or he reason on why he does what he does.

I’m amped for the sequel.  I can’t wait for more traps.  Josh Steward is the Heather Lampkincamp of The Collector.  I just hope The Collector isn’t dumb down in the sequel and reduced to a mediocre way of trying to earn a buck for the writers of Saw who by then wouldn’t be able to sell a script without it coming off like a Saw ripoff.  Lets hope for the best, lets dream for The Collector will be as original as we all wish it to be and lets try to keep an open mind about sequels.  Fans know that sequels can make or break a character – for The Collector’s sake, we hope that The Collection will make the character and set him for many more sequels to come.