Spiders creep me the hell out. Eight legs, hairy, lots of black eyes, fangs – Spiders are frightening creatures of nature especially if you’re an insect. Spiders can hunt probably better than any human can as they can spin a web to capture their pray, dig holes to create traps for passing by prey, and can inject poison to paralyze their soon to be meal. I’m so fascinated (and frightened) of spiders that I had to review a copy of Tibor Takacs film simply
entitled Spiders. 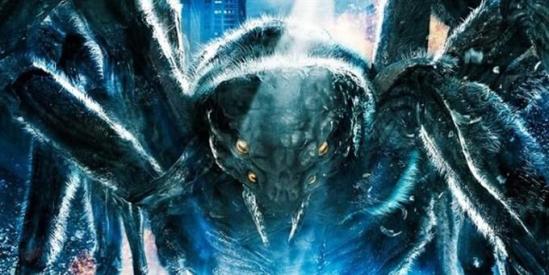 A disabled Soviet Union space station once harvested alien DNA that would only combine with the genes of spiders. The station was abandoned and 20 years later, the station orbits earth until a crumbling meteor slams into the station breaking off portion and sending the space junk into the atmosphere and crash landing into New York City’s metro underground. The mutated spiders lay eggs inside their prey and grow six inches every hour. A massive military cover up exposes the greed behind a rogue colonel’s intentions and its up to a metro controller and his estranged ex-wife, a city health inspector, to bring the surface the truth of the colonel malicious reign and to stop the mutant spiders from taking over the city. 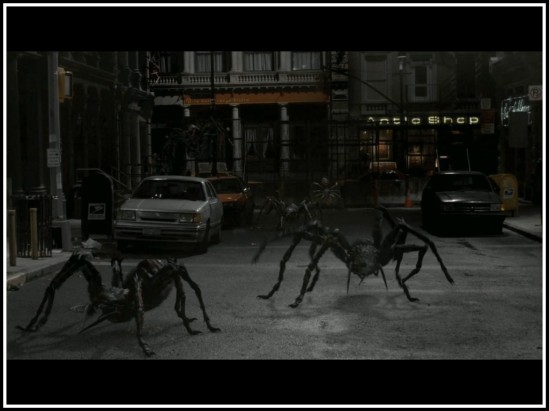 Director Takacs isn’t new the giant spider genre as he directed the 2007 TV movie Ice Spiders which didn’t fair too well with audiences, but who doesn’t love man-eating monstrous spiders? 2013’s Spider’s feels like David Arquette starred Eight Legged Freaks with the terror among the community in an old fashion creature feature, but Spiders does stand on it’s own eight legs by making the spiders alien in origin. Adding the once softcore porn actress Christa Campbell doesn’t hurt either. Campbell is accompanied by Patrick Muldoon who might remember from another arachnid type sci-fi movie Starship Troopers as the fleet pilot Zander. Muldoon also appeared in Ice Spiders – the guy has a thing for spiders. 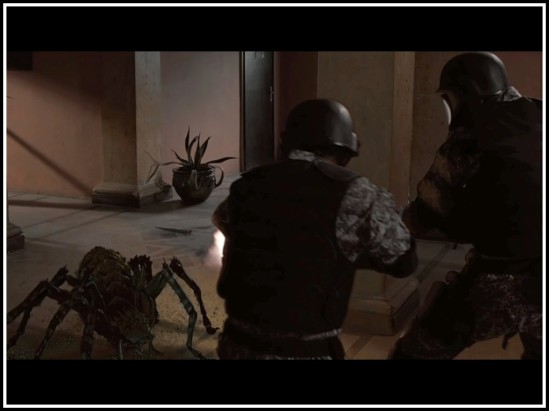 Takacs surprises me with the quality of Spiders and his other recent work. The story and the effects are okay and passable, but not as creatively outstanding as 1987’s The Gate – the film that had boosted his career as well as Stephen Doriff’s. These computer generated spiders are awkward when crawling and their razor-teeth filled mouths are even more awkward when stretched out to devour the next victim. However, Takacs knows how to keep an adventure and the action going and continuous, but seems to lack character motivation at times. I struggle to comprehend and begin to question our hero’s (Muldoon) and heroine’s (Campbell) choices in handling the spider chaos and the military’s cover-up. Also, I’m finding difficulty understanding that Muldoon’s character can outwit a giant Queen spider which is three stories tall while an entire military force can’t even handle the baby 4 foot tall male spiders.

With Spiders you will have to stretch your imagination beyond the limits of logical thinking, but with most creature features, you kind of need to and with that said, Spiders fairs well among the latest in the monster spider genre which has been severely neglected over the last five years. Spiders is also available in 3D if you have the capabilities! Thank you Millennium Films and Nu Image productions for a terrifying arachnophobia experience.