An Ireland countryside becomes the victim of a mutated strain of Mad Cow disease that is infectious and sends the victims into a blood thirsty, violence fit of rage. A small band of survivors race across the land looking for a safe haven, but with nearly everyone infected, a safe place is hard to find.

You just don’t see too many Irish horror movies and you probably will see not another one ever again. Dead Meat has to be the worst and the best Irish zombie film of the last three decades, but I’m not totally knocking Dead Meat because there are positives about the Conor McMahon written and directed film that can’t go ignored. First, practical effects, like the ones used in Peter Jackson Dead Alive, are always the best way to go because a shovel through someone’s chest or a vacuum sucking out an eye ball just doesn’t seem that convincing to me. If I want to want animated television, I’ll watch cartoons on Saturday morning. Real effects stem from the talents of the special effects crew consisting of Roy Gleasure, Brendan Fahy, and Jonathan Graham. Graham has had his hands in other major, more recent films such as Pacific Rim, Resident Evil: Retribution, and the remake of RoboCop as a mold maker.

The Fangoria Gorezone, one of the very few ever endorsed by Fangoria back in the day, film however doesn’t have a great story in which the survivors just wonder through the countryside looking for a supposedly safe castle to take shelter. The group whittles down through each passing “zombie” horde and bash and thrash through the madness. Dead Meat might not have suffered too much if one could comprehend thick Irish accents. The accents were so thick I couldn’t make out sentences. This should serious flaw the film for other viewers, but following the story was a challenge and very taxing on the ears and mind. 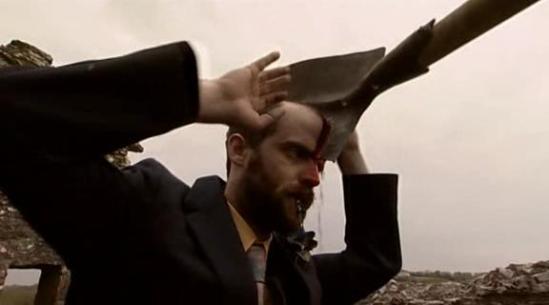 In all, there lies good and there lies mediocracy with Dead Meat. The obvious stand out points of the film are that the film is an Irish horror film and uses practical and great effects. The downside is the lack of story and a good solid core to give our characters, even our hero and heroine, some depth. Frankly, the characters could have all bit the dust without a tear shed on my part. Dead Meat is not a new film and has been out for over a decade, but certainly worth a gander and wouldn’t hurt to be Irish to get some kind of understanding out of it all.