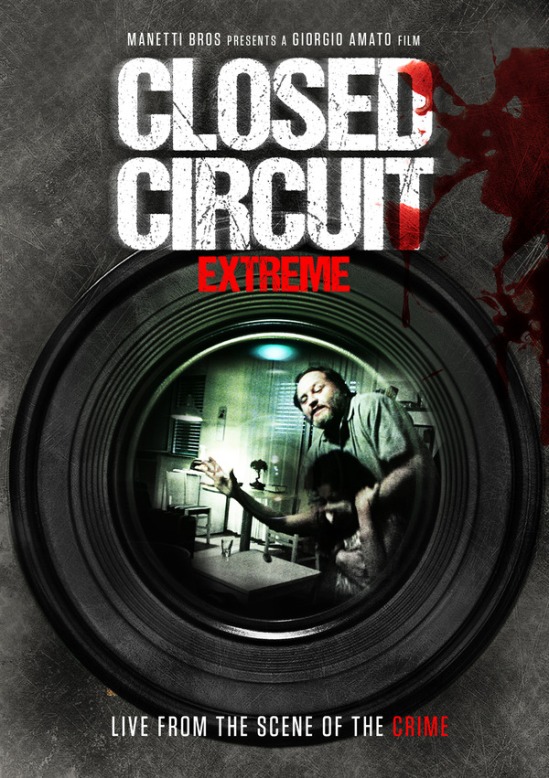 Daniele and Claudia suspect their missing friend Francesca is dead and was at the hands of a predator named David De Santis. Daniele, being an expert at audio and video electronics, and Claudia set up spy equipment inside De Santis’s home while at work. But when the two try to retrieve the recordings, trouble finds them just as it found Francesca and there is nowhere to hide in the same abode.

First off, I don’t believe that Giorgio Amato film deservers a low rating on IMDB.com. Sure, there are a few flaws with the film that can’t go ignored, but no one can deny the realism of the story. An average man living an average life trapping unsuspecting young women in his average home for his own sexual and disgusting kicks of rape and murder. Sounds like something we hear about every year. For example, the Cleveland man who locked and chained up three young women for years and did ungodly things to them.

“Closed Circuit Extreme” is shot as court evidence which is all find and dandy, but if the “video evidence” is suppose to give the film a realistic, creepy feel then why put in character profile pop-ups in during a freeze frame of each character? There couldn’t be more invented ways to explain who these people were and why they’re there? I Like the idea that the cameras were motioned activated. This eliminates the inactivity and any dull moments in a life of a serial killer. Who wants to see a guy sit on his couch and scratch his ass for five hours?

Some of the character decisions were poor to give the film less credibility to the characters (such as Claudia’s decision to stay in the house after being discovered), but doesn’t necessarily take away from the story because suspense has been achieved in a film like this. Veteran Italian actor Stefano Fregni gives a chilling performance as serial killer De Santis. Lonely, child-like, over weight describes most of how we experience serial killers, but De Santis is smart and that makes for a dangerous character. No doubt was revealed by Fergni that he can put us into the life of a disturbed individual.

Lastly, the Rome set film is majority all in English. Was Amato’s film targeting American audiences? Perhaps. I find that the film’s release is very timely with the coinciding information that has revealed the identity of England’s Jack the Ripper. That could be a good selling point for the film, maybe? To get back on topic – I rather have a film set in Rome and speak the native language or else the film loses some authenticity.

“Closed Circuit Extreme” lives up to it’s moniker of being extreme. If you’re not keen on kidnapping, rape, and gruesome axe wielding murder of young beautiful women, then this is certainly not your movie. If all that stuff is your kind of thing, then you’re a sick son of a bitch and this will suit you well!