Skipping school and playing hooky is a rite of passage for any under 18 student. Almost everybody and their mother have ditched class to go to the mall or smoke pot or drink or even probably something more naturally and hormonally scandalous between two teenagers. Usually the only worst thing that could happen from playing hooky is being caught and punished – grounded, detention, or suspension. Now if you were to skip school to go to a potentially demon possessed and satanic sacrificial abandoned insane asylum to get your kicks, then you might have something other than the prospect of getting pregnant or suspended from school to be worried about…

Five high school students decide to play hooky and set up a smoke and drink shop in an abandoned Psychiatric facility where rumors of spirits and demons inhabit. The creepy, spiderweb infested asylum delivers to be the perfect isolated spot for their fun day away. That’s until they meet Buddy. Buddy unleashes a playfully rough and violent game of hide and seek. When the five students realize that Buddy isn’t all right in the head, the jig is up and playing hooky has become a fateful and frightful game for their very lives.

“Playing Hook” is the first film under the Chad Clinton Freeman created Pollygrind, a Las Vegas Film Festival, title. Shot in only seven days, Frank S. Petrilli’s found footage film inspires us all to invest a cheap camera, a decent script, fair actors, and to produce solid entertainment for a hour and half. Petrilli’s film has a lot of heart; more than most well-funded and fully production glazed films today. Every scene involving an effect is based off slight of hand or implying techniques. The first act of the film bares the only fault where too much exposition on backstories and too much wandering around to find a hang out spot creates a loss of excitement. These scenes seem too much like script filler than important notations.

Not until the second act are we greeted with a compelling escape and the maniacal Buddy. Buddy, a childlike grown man with a schizo mentality, has a violent and perverted nature about him. Tom Petrone makes good on Buddy’s character. I wish I could say the same amongst the five students. If you’re playing hooky and doing what raging hormonal teenagers like to do, there needs to be sinful activities. Most of their activities are implied. The bag of weed is shown, but nobody is seen smoking it. The bottle of whiskey is stolen from one of the student’s home, yet nobody drinks it. Sexy dances are given, but no sex was given. The intentions are there, but the execution was a bit lacking because in most slasher-survival films, sinful acts get you killed. There was one scene in particular where Rosie and Megan made out, but the camera was behind Rosie and the kissing was blocked intentionally I’m sure. A sure sign of being on the edge and then you’re pulled right back to safety and safe is what I feel “Playing Hooky” was made out to be.

“Playing Hooky” stars Kim Kleemichen as the tough girl Rosie, Becky Byers as the sexy Catholic girl, Vincent Kulish as the slick as shit driver, J. Wright Chester as the mouthy hidden camera guy, and Theresa Davis as the ugly Catholic girl. Every actor and actress has their role and plays it well, but there characters lack depth and that isn’t their fault except for maybe Vincent Kulish who co-wrote the movie. However, “Playing Hooky” is a good first release film for Pollygrind and Derelict Films and a good edition release for Wild Eye Releasing on October 27th. 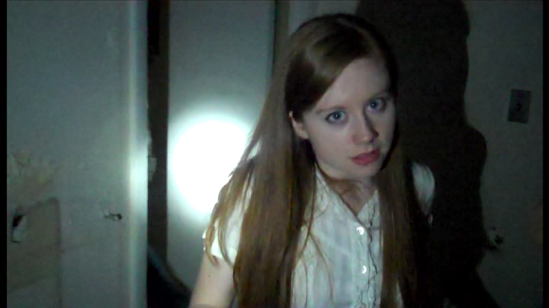 Not a damn thing…