During a therapy session, Peter recounts the tragic last and painful moments with his distraught wife Mara before she commits suicide. Peter’s recollection is a raw and unadulterated look into the common and devastating marital strifes that plague to destroy connecting relationships and end tattered lives. 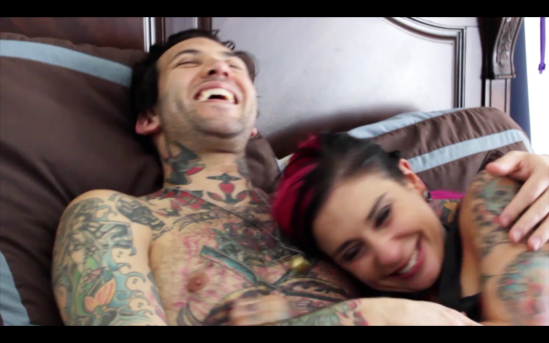 Frequent horror journalism Jerry Smith writes and directs “Love is Dead,” a short traumatic drama film stemmed from pieces of his own life brought to fruition, delivering an emotionally charged shower scene with adult stars Joanna Angel (“Evil Head,” “Re-Penetrator”) and her on-screen, off-screen lover Aaron “Small Hands” Thompson where Mara (Angel) confronts Peter (Thompson) with questioning infidelity while cornering and confining him in the shower. There’s a bit of back-and-forth that eventually lands Mara into the bargaining stages of the Kübler-Ross model, aka the five stages of grief, where she bets she can give better head than Peter’s undisclosed lover. As Mara proceeds to go downtown in an erotically uncomfortable moment of irrationality, Peter’s built up anger goes from hot-to-cold in a stinging moment of what should have been a gratifying release. Now for a side bar, being two professional adult film stars and a real life couple, the fellatio scene could have been not staged or could have been completely staged with some teasing cinematography accompanied with that familiar slurp and gag audio effect. Either way, the dynamic between the tattoo-riddled performers is fairly natural and passionate in their own Burning Angel regards, but does favor less like a ready to romp fantasy and more like a provocative insight of marital desperation and chapter ending turmoil.

Aside from Angel and Thompson, “Insidious” actor Ruben Pla tackles the outsider character looking in through the mindset of Peter’s therapist Michael. Michael is not only rightfully and objectively cold and stern, as many therapist are groomed to be, but he’s mechanically and brutally forward, dishing out the painful truth to Peter when Peter’s inner conflict comes to the forefront on whether he could have saved Mara or not. Though minor in screen time, Pla’s role partakes as a major contribution worth the respect of the short runtime. 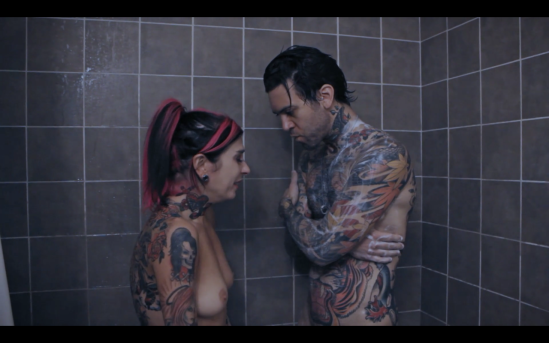 The 10:50 minute short is a product of the independent film studio Sickening Pictures founded by BJ Colangelo and Zach Shildwachter. “Love is Dead” can be viewed from free over at Sickening Pictures Vimeo page, but beware, the film is definitely NSFW! Check out the Jerry Smith inspired “Love is Dead” short that’s full of overwrought pain, doused in uncomfortable situational nudity, and barred with incomprehensible loss tightly bottled inside a reality-checking one-sixth of a hour.