London’s infamous 19th century serial killer, Jack the Ripper, was never caught and the specialty knives he used to fillet his victims were never recovered, but in the darkly lit maze of an abandoned Victorian warehouse located in present day London, the spirit of the mysterious murderer of prostitutes lingers within the bricked up walls or so goes the urban legend. Six aspiring writers are invited to a screenwriters workshop at the Victorian warehouse for inspiration and orchestrating the event is an eccentric arts professor Richard Wise. The goal is write the most horrifying, potentially box-office busting horror story for a chance at penning a major movie deal. One of the six writers, Ruth, had received an enigmatic case full of old knives prior to her invitation, placing inspiration in her to write a terrifying script involving Jack the Ripper. When the knives go missing, the writers become trapped inside the warehouse as their involuntarily actions result in the return of Jack the Ripper to continue his unholy work of slaughter and the only way to stop him from carving his way into their ill-fated story is to solve the mystery of why they were specifically chosen to attend this particular workshop.

“Razors: The Return of Jack the Ripper” is the interesting first installment of a British horror movie franchise from writer-directors Ian Powell and Karl Ward. The co-filmmakers reach into the 19th century to bring Jack the Ripper into the present day, but Jack’s not the same; He’s a variant of him old self that involves the murderer being a pissed off malicious ghost in a concoctive tale that blends the modern-day remakes of “House on Haunted Hill” and “13 Ghosts” from near the turn of the century. Other than a physically present, if not more of a flickering presence, manifestation with a link to his prey of frightened writers, I won’t delve too much into details of Jack’s return and what he means to accomplish in hopes of not spoiling the story for you, but I have a sneaking suspicion that that won’t be a problem. The independent film attempts very little to bring the Victorian era swag into the fold. Even Jack the Ripper solely dons a dark wide brim hat and cape, that loosely associates him with the time period. Powell and Ward focus more on the group of bewildered writers and their conflicting dynamics on how they deal with their predicament – i.e. one character is very poignant on the dangers while one other brushes off superstitions and unnatural occurrences – but the pair of filmmakers fail to work the character Professor Wise into the mayhem and by not attributing purpose to the character, the professor inarguably becomes one of the many loose ends of a sunk horror franchise before it’s even set afloat.

The 2016 film stars Kelby Keenan as Ruth, the only character to have any damn sense, but won’t just leave even though she repeatedly states how much danger their in. Kelby’s the lead actress with Josh Myers (“Zombie Diaries 2”), Georgia Mcguire, Kunjue Li (who oddly enough have a bit part on an unrelated Jack the Ripper television series entitled “Ripper Street”), Jack Brown, and Ian Weichardt (“Freak of Nature”) to round out the group of writers. Together, their plight doesn’t come across potently enough; instead, Thomas Thoroe’s Professor Richard Wise strew them through the warehouse corridors in an unbelievable performance of the professor not having a clue about the turmoil that’s afoot. Jack the Ripper goes virtually silent, much like a ghost should, under the unkempt performance of Andrew Shire. In short, the cast haphazardly walks through the storyboards, overkilling reactions and not reacting enough during called upon scenes to the relative cause of action.

So far, in this review, you might conclude that Powell’s and Ward’s inaugural franchise film may be a dud and not spawn sequels. Honestly, I personally would like to see closer for the open ended characters and story; however, I preferably would not like Powell and Karl in the director chairs. Their style could only be described as spastic with way too many edited in interjections of arbitrary spook house filler. The body of work has the sheer tenacity of being more like a 92-minute music video that’s abundantly chorused with haunted house ambiance. Literally, interlaced cuts made more than half the film, barely leaving any story for the actors, and the back-and-forth edits could crisscross your eyes into a strabismus. 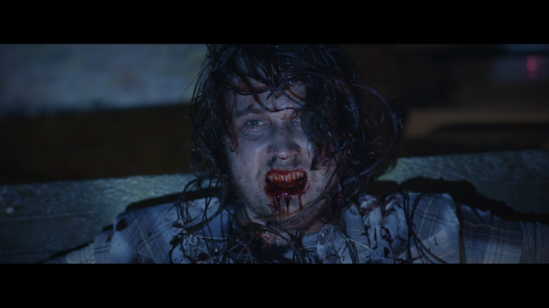 Breaking Glass Pictures and Magic Mask Pictures Limited present “Razors: The Return of Jack the Ripper” on DVD home vide. Usually the pride of indie LGBTQ films, Breaking Glass Pictures has a fair share of horror as well and, typically, do right by the release. In this one particular, the DVD is presented in a widescreen 16:9 aspect ratio that’s very detailed. The color hues are a bit dull, more so grey, than hoped. The English language stereo dual channel stereo track had no part in being saved. Layers upon layers of unfinished audio snippets run rampart throughout to the point where you can pick out the flaws at will. Dialogue is wish-washy with the full power of the voice being reduced to no more than a mumble of hearing every other third word from every character. The DVD does come with some special features, such as clips and interviews in a segment entitled “Lights, Camera, Speed!,” “Behind the Walls” is a short featurette about the film, and you can also play the film with commentary from the directors and cast. The film is dedicated to the late Khan Bonfils, who had a minor part in the introduction, after his untimely death on a separate project. “Razors: The Return of Jack the Ripper” is clunky at best. Poor Jack couldn’t rise from the dead to reclaim his infamy in this ghost show of scatterbrained storytelling.

“Razors: The Return of Jack the Ripper” is available at Amazon.com!