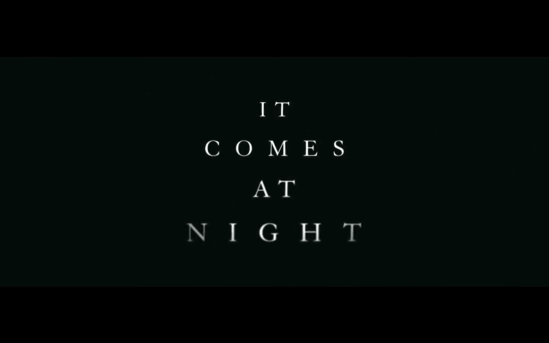 Set in an infectious diseased post-apocalypse world, Paul, his wife Sarah, and their son Travis have fortified themselves in a dense forested and isolated house to ride out the easily spreadable disease. Always prepared and ever suspicious, Paul expects everyone to follow a rigorous routine, following procedures in order to avoid becoming infected, but when a young family, seeking supplies and refuge, enters their lives and their home despite Paul’s hesitations. Paul’s family’s routine and order face disruption that opens themselves up to the ever present danger outside and inside their home.

“It Comes at Night” is an intense, heart-pounding mystery thriller set inside the close quartered confines of a desolate house where trust doesn’t come without auspicious interrogation and teeth clinching suspicion. Writer-director Trey Edward Shults’ sophomore feature has layers upon layers of underlying human nature undertones when people are put up against an unsurvivable situation inevitably with their backs against the wall, literally, when confronted to whether to implement the good will nature of their humanity or not, to take that risk to help others or to save their own skin, and to attempt to reconnect with other people or stay separate from the masses. Even the “it” in “It Comes at Night” isn’t as simple as one would first think. Most unfamiliar audiences would assume “it” is a snarling, brooding, oozing, and grotesque creature, or perhaps even a devilishly grinning clown, that comes around when the sun falls; instead, the “it” is an occurrence, an event sparking nightmares inside the human mind that formulates fear and a tall order of exemplary caution.

The Australian born Joel Edgerton (“The Thing” remake) stars as Paul, the father of the family he’s trying to protect at all costs. Edgerton perfectly pitches as a, supposed, American voice, since the story doesn’t exclaim a locality, but the assumption is the setting is nowhere, U.S.A, and plants a firm foot down as a rugged resident of wilderness survival accompanied by his wife Sarah played by Alien: Covenant’s Carmen Ejogo. Ejogo’s offering to her character gives Sarah a powerful will to do what’s necessary and to support Paul in his determination to protect their only son Travis (Kelvin Harrison Jr.). Edgerton, Ejogo, and Harrison opposite up well against the foreign element, another family with their performer genetic makeup of Christopher Abbott, Riley Keough, and Griffin Robert Faulkner as Will, Kim, and their just above toddling son, Andrew. Each actor embraces the role in their respective family and at first, the interactions are genuinely jovial, but then the uncomfortable thick tension evolves from the point of an extreme pivot into the folds of deception and fear.

Shults maintains an ominous atmosphere of overwhelming strain amongst the characters and “It Comes at Night” has a unique perspective set inside an already apocalyptic ravaged population despite the lack visual expositions. Yet, the finished project feels incomplete. Pacing is the biggest concern with the timing of events between the introduction of Will’s family and their destined downfall that results in a climax that’s so bellied-up in an sorely anti-climatic fashion that the notion of being cheated out of a more gut-punched ending pulls at the core of the cinematic soul. That’s not to say that the film has one, if not more, interpretations; in fact, Shults’ entire feature is or could be considered open for interpretation, with examples from the duly noted “red door” to the Travis’ child-like personality, and usually those types of heavily subtext films stick around more way after the credits roll, but also, in a slightly bittersweet cause and effect, leaves more of a foggy formulation of events during the unfolding of the story. Also, an aspect that didn’t help the cause was shying away from a powerful scenes that should have left an impact, but R-rated feature delivered no acute moments of remembrance and leaving much to the imagination with only the majority of the rating pie being flavored with tasteless language.

Lionsgate Entertainment presents the Animal Kingdom and A24 produced “It Comes at Night” on a 1080p resolution in an aspect ratio of 2.39:1. The imagery lavishes in a gritty, woodsy detail that organically defines the sea of trees and natural flesh tones, but as the title suggests, most scenes are shot at night that are moderately blanketed, yet ineffectively intrusive, in digital noise. The English DTS-HD Master Audio 5.1 mix definitely has more girth during the livid nightmares and vigorously tense scenes, but, surprisingly, the dialogue track lacks gusto in the wake of a more lively surround quality. During exchanges of hushed tones, dialogue is rendered nearly inaudible and the option English subtitles had to be deployed. Spanish subtitles are also available. Special features include an audio commentary by writer-director Trey Edward Shults and actor Kelvin Williams Jr and a cast and crew discourse in a segment entitled “Human Nature: Creating ‘It Comes at Night.'” Overall, the psychological and humanity breakdown of the characters of “It Comes at Night” is worth the price of admission along with the teachings that family is key and to never rely on the goodwill of strangers, but finishes with a weak sense of direction that ruptures an unsavory cyst that doesn’t conclude coherently.

Own It Comes at Night on Blu-ray!