Experimental doctor, Anton Lupesky, invents a controversial drug that can free a human soul from its vessel and travel through into the lifeless eyes of a corpse, possessing the body to reanimation. The only side effect is grotesque hallucinations that are so horrible, few survive the experience. After a stint of missing persons and a string of mysterious deaths at the Whitebriar Institution, Lupesky is fired from his position, banned from the medical board, and brought up on criminal charges. His acquittal sparks him to embark on a journey overseas to continue his radical medical experiments, away from regulations and tremendous oversight. The doctor returns six months later for far superior medical innovations in America and begins practicing again in his own basement with the unscrupulous help from a couple of lackey acolytes that leaves Lupesky’s supply of “patients” not in short demand. One reporter keeps investigative tabs of the good doctor as she suspects a connection between him and her father’s death at Whitebriar and when her and her friends starts to snoop around, Lupesky has no choice but to use any means necessary to thwart her investigation, even if that means secretly administrating the drug to her in hopes that her soul can fly with his – if she survives.

Thirty years ago, “The Soutangler” hit the cinema market. A low-budget gruesome mad scientist flick with a penchant for some fantastically grisly practical special effects. The 1987 shocker was directed by Pat Bishow, penned by John Bishow and Lance Laurie, and shot on location on Long Island, New York. The Do-It-Yourself and Lovecraftian macabre does a bit of soul-searching to find resurrection from the video graveyard. Luckily, Bleeding Skull! Video and the AGFA come to the rescue with a chock-full of extras release that digs up the Bishow’s lost creation, dusts it off, cleans it up, pats it on the butt, and sends it back out into the world onto DVD home video. “The Soultangler’s” niche envisioning goes against the grain of traditional filmmaking, bordering experimental, but definitely a must-see for those interested in existentialism horror: the removal of free will to be replaced by another’s. 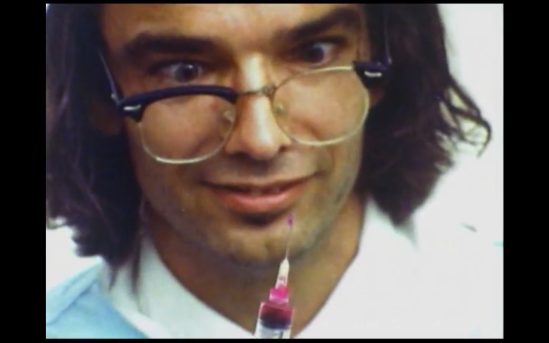 Pierre Devaux stars in his only credited as the mad Dr. Anton Lupesky that resembles along the lines of a Dr. Herbert West from that little known trilogy of the H.P. Lovecraft inspired “The Re-Animator.” With a wiry frame, stringy shoulder length hair, and government-like issued classes, the very animated Pierre Devaux casts the ideal character whose maniacal and perverse in his medical malpractices. The only one willing to stop the Lupesky’s experiments is investigating journalist Kim Castle of The Daily Chronicle. Castle, played by Jane Kinser, is about as ferocious as her beautiful as an aggressive reporter, unwilling to stop to unearth the truth of her father’s tragic death. Kinser’s not much of an onscreen force to reckon with as she’s quite timid, but she manages to hold her own up against Devaux wild eyed lunacy. Rounding out the cast is Bob Cederberg as a Carl the drugged addict henchman, Louise Millman as a loyal minion to Lupesky, and Tom Ciorciari as Castle’s concerned friend who battles the zombified corpses embodied by Dr. Lupesky.

While a strong appreciation exists from the outstanding attention to detail with the decayed bodies and the explicit violence in the finale that nightmarishly flourish in a heap of ghastliness, the rest of the film is as disjointed as the dismembered bodies in Lupesky’s basement of horrors. Despite being submersed in various talking head scenes that divulge significant backstories between Dr. Lupesky and Kim Castle, the story struggles to keep the straight line focus, swerving erratically between subplots and the main premise. Castle’s horrific dreams of aggressive zombies loosely makes a connection other than prepping Castle’s subconscious when ingesting Lupesky’s soul freeing drug. The story of Dr. Simpson also flounders to the waist side with her and Dr. Lupesky’s love affair, the only women he would even consider getting close to and not slaughter for his own amusement.

“The Soultangler” arrives onto full-bodied, graphically illustrated DVD from the B-movie collaborators Bleeding Skull! Video and the American Genre Film Archive (AGFA) and distributed by MVDVisual from the original 1″ master tapes. Shot on 16mm, but edited on video, “The Soultangler” has a SOV experience in it’s original aspect ratio of a full frame 1.33:1. Quality varies from the source material, including some tracking and edge flare issues, but overall a solid transfer with a sizable color palette that includes tints, natural skin tones, and visceral dream sequences that show little-to-no sign of diminishing. Stereo mono track does the job despite poor mic placements to get the full girth of dialogue. HypnoLoveWheel’s indie synth/rock soundtrack has more popularity on the B-level than in the mainstream music, but serves “The Soultangler” with broad depth to solidify a wedge between “The Soultangler’s” whimsical charm and the Gothicism that is Stuart Gordon’s “Re-Animator.” Bonus features include, for the first on any release, the Unseen 62 minute alternate director’s cut, a commentary track with director Pat Bishow, behind the scenes footage, trailers for “The Soultangler” and “Dead of Night Town,” music video for “wow” by HypnoLoveWheel, and liner notes by Bleeding Skull’s Zack Carlson. Conceptually, “The Soultangler’s” premise oozes originality and creativity involving soul transformations through the portal eyes of a dead body and that’s simply brilliant and what today’s horror genre certainly craves. Constructionally, Pat Bishow couldn’t push the momentum to pickup the pace to overripe an engaging story, but the climax, out of left field, unsheathes a bloodbath of ultra-stellar, DIY proportions!

At Amazon, The Soultangler, Right now!