The Kirby brothers, Vincent and Michael, witness the attempted suicide of his father who placed a snub-nosed barrel shotgun underneath his chin and pulls the trigger. As adult, the brothers process the trauma in their own ways with Michael unable to jumpstart his life that has been exploited by his brother who has joined the priesthood. Now as exonerated Catholic priest, Father Vincent continues his crusade in absolving confessional patrons of their sins, but with a twist. Hell bent on exacting death through absolving upon those who steal in any capacity, Father Vincent travels the rural areas of Mississippi in a beat up congregational and confessional mobile camper to soapbox his wrath sermons and to rid the world of those who surface his childhood trauma. When another psychotic killer ascertains Father Vincent’s radical cause and wants to join devious purposes, the aversely complicate Michael can no longer abide by his brother’s carnage of guilt path and isn’t keen on spending his life with another heartless killer, urging himself to exit the threesome and starting a life of his own with Ruby, a diner waitress who has taken a shine to him, but Father Vincent and his newfound accomplice won’t let him go that easily.

Just what the Catholic Church needs… one more film depicting a priest using God to benefit his own greed! Mark Savage co-writes and directs the damnation of thieves film, “Purgatory Road,” with a post-viewing requiring a penance of one Our Father and ten Hail Mary’s! Co-written with “Stressed to Kill’” Tom Parnell, “Purgatory Road” is a horrific hallmark of adverse Americanisms such as religious fanaticisms, self-indulgence, mental instability, corruption, and narcissism. All these qualities can potentially lead to one common bond that Savage makes centerpiece and that would be murder. Savage’s extreme vision isn’t all that far from today’s reality where cases of the mentally and the spiritually unstable and religious acolytes plan, stage, and carry out killing sprees almost weekly, corrupt politicians and the uppermost devout pocket secrets and bribes, and egotistical maniacs pick and choose basic civilities to divide groups against each other. I don’t see “Purgatory Road” as shocking and taboo, but rather as 98 minute revelation, not in a Almighty sense, but as a break in the opaque lens that is today.

Father Vincent firmly believe in his actions, without doubt and without shame, and uses any tool, or person, to fatally smite thieves, but has no absolute joy in the way he responds to pilferage acts. The guilt over his father’s attempted suicide drives him, sucking the vibrancy, the energy, and the happiness from him, and the fact that his father still lives, as a basement dwelling, cannibalistic creature, makes the matter even more dire to Vincent. The fraught priest ended up being an ideal performance for Gary Cairns (“Malignant”) who noted in the behind-the-scenes interview that his personal issues at the time brought out the all-around worst in Father Vincent and despite the character written as a fire-breathing, wrath of God man of the cloth, Cairns is able to weather his role as a seemingly idyllic Catholic priest with something to hide from credits-to-credits. Michael Kirby might be complicit, but isn’t wholeheartedly on-board with his brother’s blood shedding that drives another relevant nail into a Cain and Abel type tale. Michael’s longing to part from his brother is difficult for him, whether he also feels guilt for his father’s misfortune or an attempt to try and steer Vincent from complete and utter chaos, and even with a chance to escape the madness, Michael unintentionally flounders the attempt that ultimately becomes his climax to kill. Luke Albright (“Devil’s Pass”) engrosses himself as the black sheep amongst wolves in sheep clothing. Though his character is scribed as conflicted, Michael has downplayed emotional trauma that extremely binds him to his brother and makes him just as equally disturbed when disposing of his brother’s victims. Savage and Parnell’s narrative angle might not focus on the emotional level of Michael, but Albright flourishes the angst that internally rips him apart within the confines of every contentious scene that involves Cairns’ character. The brothers are driven further apart when Mary Francis, a sadistic and cannibalistic serial killer, discovers their undertaking, forces herself to join them in the cause, and catches the eye of Father Vincent, who displays some physical touch withdrawals and loneliness with the vulnerability of his corpses. Mary Francis is easy on the eyes, casual in her affairs, and empowering with a high sex drive that would make any man weak at the knees in a normal world, but Mary Francis is far from normal and Trista Robinson (“Jurassic City”) offers her short build, cutesy voice, and piercing eyes that favorably compliment Mary Francis’s dark features and equally dark soul. The character is an unsuspecting brut heart whose well-written as she describes to a radio talk show host her boy or girl fascinations as a drab hunting sport where spilling their blood and robbing them is the last great and excitable moment of the relationship, signified and sealed with a single kiss. The rest of the cast rounds out with Sylvia Grace Crim (“Happy Death Day 2U”), Geoff Falk (“The Livingston Gardener”), Chace Beck (“Meltdown”), and Douglas Cunningham. 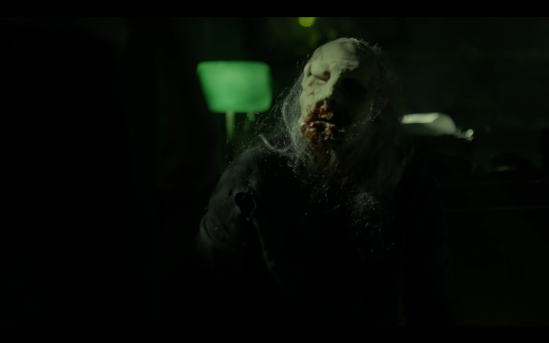 Shot on location in Mississippi, “Purgatory Road” offers a really cool story that’s not produced on a studio lot and is kept out of the rural areas of California and any other locations that bear no resemblance to the deeply Southern pious roots of the 20th state of the U.S. Savage was able to obtain raw locations that best fit the delusional and fanatic tendencies of Father Vincent and with the gruesomely beautiful special effects and makeup by “American Guinea Pig: Bloodshock’s” Marcus Koch and Cat Bernier, the murderous role of not only Father Vincent but also Mary Francis are furnished to frightful fruition of two fiends you just don’t mess with in the devout South. Koch and Bernier texturize severed body parts and provide a wide diameter for blood splatter as an intensifying tool, but don’t overly exaggerate the gory garnishes that might re-direct attention from the story.

Unearthed Films and MVDVisual’s Blu-ray of Delirium’s “Purgatory Road” has Unchristian values worth indulging that includes a widescreen 1.85:! aspect ratio. The digital shot film uses a Canon EOS C300 Mark ll in a full HD setting and the image quality has phenomenal sharpness with natural skin coloring and excellent details that come to focus on the outside faded, dirty paneling of the rustic RV and in the fleshy, blood wet limbs of the Koch and Bernier gory special. Cinematographer Andrew Giannetta has a working eye for the horror element of “Purgatory Road’s” red-light district familiar frame work with appropriate fog and tint to augment the gothic murkiness and dread. The Dolby Digital 2.0 audio track is favorably well-balanced with no kickback or unintelligible miscues. “Purgatory Road” might have an RV kill room, but the RV isn’t involved in high speed chases or fiery explosions, so the dual channel works well for this type of low-key thriller. There are bonus features aplenty with a commentary with writer-director Mark Savage, a gallery slideshow entitled “The Grisly Art of Marcus Koch and Cat Bernier,” writer Tom Parnell speaking about his experience as a screenwriter behind his main profession as a lawyer, a lengthy featurette of the three lead actors speaking about their involvement, how they came to the project, and what the film and/or story means to them personally, and a Purgatory Road Q&A featuring Mark Savage. Impenitent swindlers beware! “Purgatory Road” is all fire and brimstone braced with a strong cast of compelling talent and a horrifically transfixing tale of blood is stronger than holy water.

2 responses to “Evil Shall Not Steal! “Purgatory Road” review!”