Four teenage boys and four teenage girls decide one summer to live free, without inhibition, and to make as much money as possible. Discovering an abandoned caravan in the middle of nowhere, they set up their home away from home where doing what they want, and who they want, becomes a way of life. Sexual freedom and adolescent independency quickly leads the friends down a path of miscreant wandering and sordid pornography and prostitution. When one of the teens accidently dies, four accounts of what happened are told aloud to the court and with each version, the truth becomes indistinct amongst the slander, exploitative sex work, and their anarchist ways that surround a seemingly corrupt politician. 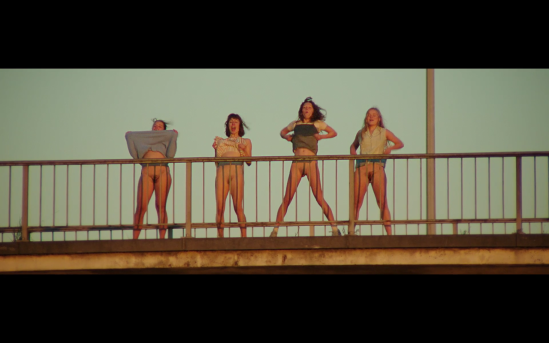 Debased youth bored with the common fabrics of society stitch their own downfall into extreme moral degeneration in Rene Eller’s 2018 dramatic-thriller from the Netherlands entitled “We.” Also known as “Wij” in the Belgium tongue, Eller tackles the cinematic adaptation of an Elvis Peeters’ novel of the same name from 2009 with not only directing a compelling and frightening image of idle hand youth, but the filmmaker’s also credited as penning the non-linear script told in four chapters that highlight four out of the eight teens’ versions of events and how that fateful summer not only saw their ethics become shattered, but also their close-knit friendships. Eller also co-produces the film, working alongside production companies Pragma Pictures and New Amsterdam Film Company.

“We” consists of a young cast, in age and in experience, bred from the Netherlands and though virtually credit-less, powerful performances from the lot all around that touch not only the venereal stimulators, but also reaches the twisted knot inside the gut of how being human equals being depraved. The four chapters begin with Simone, a young man smitten by the Femke (Salomé van Grunsven) who becomes a catalyst for the trial, played by an Anton Yelchin lookalike, Tijmen Govaerts. Govaerts gleams in Simon’s adolescent jubilee of love, sex, and carefree attitude. His story is followed by Maxime Jacobs’ Ruth, a 16-year-old who can’t seem to step beyond the line into total reckless abandonment, Yet, Ruth’s game for risky her own body to gain approval from her friends and for her shadowed love for Simon. Jacobs gapped teeth act as imperfect perfection upon her slumping figure sheathed in plaid, screaming purity inside her outcast shell, but Jacobs proves she can be more naughty in her character than that of her co-stars. Liesl’s third chapter paints a more grotesque picture of her friends summer. Pauline Casteleyn acts in the role of Liesl, an aspiring artist with that tough inner and outer shell Ruth aspires to but ultimately lacks. Casteleyn can cast a deadpan stare with the best of them that offers more of a chilling vibe off of Liesl, but neither of these roles could outwit, out-dominate Thomas. Aimé Claeys concludes the fourth chapter as the ringleader of the friends, or, more accurate, as the pimp and the kingpin. Thomas’ manipulate hand fosters questions about his past left purposefully open for a subjective opinion on whether his actions were that of his own boredom or being pushed to his limit by external forces. “We” rounds out with Friso van der Werf, Folkert Verdoorn, Laura Drosopoulos, Lieselot Siddiki, Gaia Sofia Cozijn, and Tom Van Bauwel. 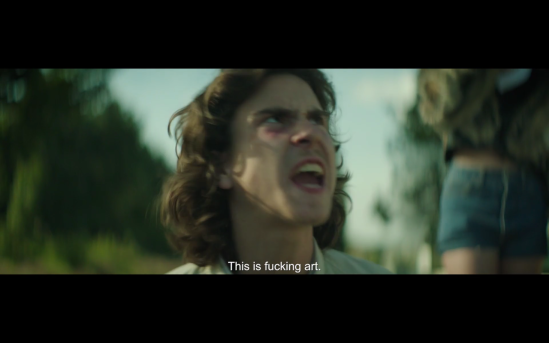 Let me start off by saying that when the teens’ entrepreneur pornography ambitions comes to fruition, these reviewers’ eyes widened at the surprising site of explicit penetrations and fellatios; however, the unexpected hardcore isn’t the act of our already very naked actors who probably stood out for stand-ins as the story leads the friends to think of using masks for anonymity and all explicit scenes of sex involve masked performers or implied scenes are angled just right from the cruel and smart tactics of Rene Eller and cinematographer Maxime Desmet. “We’s” unreserved sexual boot up the censorship’s tight behind is this junkie’s drug of choice that gets the blood pumping in all the right places; yet, “We” garnishes a heavy topical subject serrated with generational and societal gaps of corrosive virtue and speaks in volumes of what entitlement entails for a body of minors spoiled by the very community that either nurtured or tormented them and then, finally, turn on them all, parental or not, with harsh repudiation. As a sincere compliment to director Rene Eller, “We” belongs in the maladjusted family tree that also bears the rotten teenage fruit of Larry Clarks’ “Kids” and Catherine Hardwicke’s “Thirteen” and harks back to the Golden Age of Dutch Cinema with the Dutch Sex Wave from the 1970’s which produced controversial erotica with “Blue Movie” and “My Nights with Susan, Sandra, Olga and Julie” from Scorpio Films. “We” has a friendly look and feel of a 70’s film despite modern devices, making the resemblance to the Golden Age that much striking. 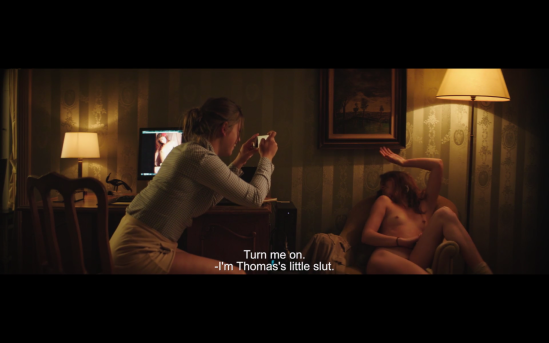 From the Netherlands’ festival circuit comes the highly engrossing, explicit drama “We,” distributed stateside by the Philadelphia based Artsploitation Films onto an unrated director’s edition Blu-ray home video release. Presented on BD-25 in full HD and in a widescreen, 2.65:1 aspect ratio, impressive textures flourish every inch of skin of the actors and in the panning ariel shots, which are, at times, hard to obtain. Despite some early on aliasing during the opening scene and a bit of warm washed coloring that doesn’t pop with a colorful hue range, I’ve still become satisfied with the end result that sells the illusion of Summer (you can see the hot breath during some outdoor scenes), the immense use of natural lightening, and the skin tones announce a fresh feel for the flesh aplenty. The Dutch language DTS-HD Master Audio mix holds nothing to ill speak of with a rendered clear dialogue, ample range and depth, and subtitles that sync fine with clear delineation and no mistakes. Other than a static menu, the only other bonus on this feature is the explicit reversible Blu-ray cover that displays the bare ass(ets) of half the cast from one particular scene. There’s also the PG cover that you’ll see below to not offend any sensitive souls. Coinciding with being a great story, “We” is also an important film of human callousness hidden within the prospect of free love, an age-old infiltration and exploitation concept captured by Rene Eller’s subversive eye and Elvis Peeters sage mind.

“We” Available for Artsploitation Films!