In Medieval times of Sussex, England, a powerful English king, who has kept the seething Viking savages at bay for decades, has died, vacating the throne to his son, Rollo. The Vikings seize the opportunity during this time of transition and storm the Saxon Castle, nearly killing the monarchy and all of throne’s subjects left to oppose them. With their daughter Avery kidnapped and themselves on the brink of death, King Rollo and Queen Silvia are revived by two women of the woods, a pair of witch sisters known as Constance and Millicent, who use their mystical healing powers and offer the king retribution by summoning the Yuletide monster, Krampus. In return for slaughtering the Viking usurpers, the Krampus will collect his debt in exactly 10 years, taking whatever is precious and dear as payment from the vengeful King Rollo.

Krampus has become a major media trend over the last decade, popping up in all forms of popular culture that compounded lore inside the leafy pages of books and magazines to the beast’s frighteningly half-goat, half-man exterior making for great big screen monster entertainment. The inverse icon of jolly Saint Nicholas offers punitive measures for bad little girls and boys and is sometimes referred as a companion to Saint Nicholas who probably turned a decisive blind eye to little brat Johnny’s enjoyably thievery and torture of chickens from a neighboring farm. “Pagan Warrior” is yet another narrative of the Christmas creature spun with different fabric and woven into a bitter feud of two contending enemies told modestly by director Louisa Warren (“Tooth Fairy”), produced by Warren’s London, UK based production company, ChampDog Films, a creative outlet for independent film ventures that are mostly in the horror genre and are sometimes inferior versions of bigger budget films, in the same vein as Asylum Entertainment. The script comes from Shannon Holiday (“Bride of Scarecrow”) that conveys an ageless theme of beware of what you wish for and the price of blind vengeance. 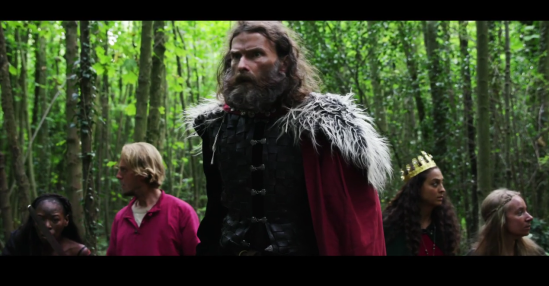 “Pagan Warrior” hones in on numerous character stories, never clearly defining a single perspective. King Rollo, played by “Escape from Cannibal Farm’s Peter Cosgrove, becomes the royal fate sealer as what he deems necessary and right is, in fact, the worst possible scenario a mad king could bestow upon himself by calling upon the supernatural death dealers for revenge. Cosgrove cleans up nicely as an English blue blood whose bequest incorporates a lineage of fighting kings with Cosgrove taking his role with due importance despite a humbling filmmaking production. King Rollo’s counterpart, the merciless Viking Ubbe fitted for Carey Thring (“Scarecrow’s Revenge”), combats a war on two fronts – the contentious bout with King Rollo and an internal family squabble that beleaguer the bond between him and his wife (Kate Milner Evans, “Pet Graveyard”) and child (Adam Sugawara, “Virtual Death Match”) as he tries to court princess Avery with a crude sexual advances. Thring’s vision of Ubbe is a classically depicted villain whose stronger with allies and a whimpering coward when alone in a fight, especially when the Krampus comes calling for his head. Darrell Griggs dons the makeup, prosthetics, and wardrobe of the horned beast, becoming the folklore of a cursed death who not only pursues the 12 month progression of horrible children, but also the appointed damned when conjured for a hit. Krampus’ outward appearance is pleasing and Griggs provides the lumbering and slight preternatural motions that give Krampus that dreaded paranormal mysticism. “Pagan Warrior” rounds out with Sarah T. Cohen (“ClownDoll”), Jessica O’Toole (“Pet Graveyard”), Mike Kelson (“Scarecrow’s Revenge”), Hattie Willow (“The Mermaid’s Curse”), Will Todd (“Mummy Reborn”), and Tara MacGowran (“Mother Krampus”) and director Louisa Warren as the women of the woods.

ChampDog Films uses a tightknit group of actors and filmmakers to sell archaic swordplay action fastened against demonic folklore and despite the underwhelming band of Vikings versus an equally small English contingent squaring off in front of a historic English castle with virtually no ample practical or CGI era enhanced presentations, the production just barely eeks by with Feudal times. Wisely, Warren shoots a number of character closeup shots, avoiding much of the surrounding modern elements and forcing audiences to focus just on the characters who are dolled up for Medieval times roleplay. Where the battle scenes and smart camera work flourish, the Shannon Holiday script becomes the ultimate weak link in the chain with a predictable plot storied with terribly cliched and uninteresting characters that couldn’t grip a sword let alone one’s attention. The story begins with its most shocking ending scene, thwarting any possibility of surprise for even the most dense and cinematically uneducated individual for the ruse play out. There is also this millennium goof in the opening backstory credits indicating events take place in 812 AD and in the same breath, mentioned also is the three days of December 1812 that this episode occurs. Since 1812 England was all about redcoats, guns, and war with America colonies, I would assume 812 AD would be the correct time period against a Viking invasion. 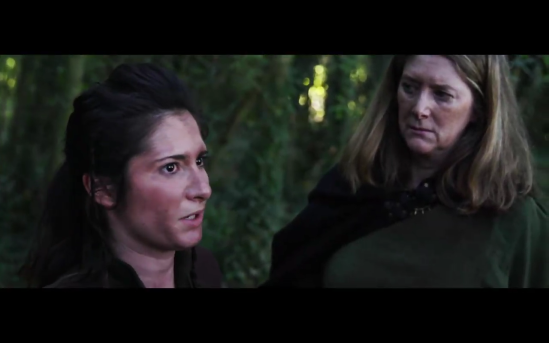 In what is not exactly a Christmas holiday horror movie, the malediction of the “Pagan Warrior” spread little holiday cheer and more yesterday fear onto an ITN Distribution and Mill Creek Entertainment DVD. Presented in a widescreen, 2.35:1 aspect ration, on a single layer DVD, sheathed inside a DVD cover that looks cooler than the actual movie itself, the lower end production avoids stylizing a historical based feature with tinted mattes, computer imagery, or any other miscellaneous camera effects seeking more toward a naturalistic cinematography that utilizes the hues at hand. Pastel blacks jump with noise and posterization from the electronic interference whereas the existing hues exhibit a less than rich approach of a more vapid green, brown, and stonewall beige. The English language Dolby Digital 2.0 stereo audio mix maintains a level of consistency. Sometimes, Krampus’ dialogue is murky because of the extra gnarling effect parroting an LFE emitting voice; however, dialogue is mainly clear and prominent. English SDH is an available option. For a time period action-horror, the lack of rudimentary range and depth troubles with little sense into the effort of adding skirmishing swords and Krampus’ reverberating growls always seem to be right next to the camera. The only bonus feature available is the trailer. With conventional means of dispatching people, “Pagan Warrior” shadows more of the slasher concept conjured by the breath of the desperate who misfires judgment rather than being an omnipotent being summoned like a djinn for total annihilation in exchange for a debt in this good faith effort by Louisa Warren of Krampus diabolism.