Los Angeles detective Jeff Anderson has his perfect world turned upside down upon discovering his beloved wife dead of suicide in their apartment bathtub. Losing his bid for Captain and having his life be in utter shambles, Anderson becomes obsessed with lurking around incoming suicide calls on the CB radio, trying to make sense of his wife’s sudden reasoning to end it all. When a similar case produces a survivor from a familiar fate as his wife’s, Anderson learns two men are behind similar forged suicides stretched out over the past ten years against prominent women figures in and around the L.A. area. The detective spins a wild theory that has him following every lead to track down and stop the father and son serial killers without any backup from his local precinct, forcing his hand to choose whether to be a cop and uphold the law or seek lethal retribution for the woman he loved.

From French director Julien Seri comes “Darkness Falls,” a crime thriller released in 2020 that is entirely shot in English, a first for the French filmmaker who helms a script from the executive producer on “Starry Eyes” and “The Man Who Killed Hitler and Then the Bigfoot,” the Belgium native, Giles Daoust. Also produced by the Belgium, the film, that was formerly titled “Anderson Falls,” gorges on the detective exemplar of the prodigal crime fighter stripped down to next to nothing before regaining footing against the two experienced serial killers out to reduce the highly professional woman population with one bottle full of sleeping bills and one razorblade at a time. “Darkness Falls” is an exaggerated piece of nurture versus nature on systemic toxic masculinity seething under the guise of one man’s oppressed childhood from the abusive women in his life and then enlightening his son to his ways while the open minded, Renaissance man climbs back up the mountain toward redemption, not only for himself or his wife, but for all women being forced in a dual parental role. “Darkness Falls” is released under the production companies Koji Productions, Lone Suspect, and Giles Daoust’s Title Media. 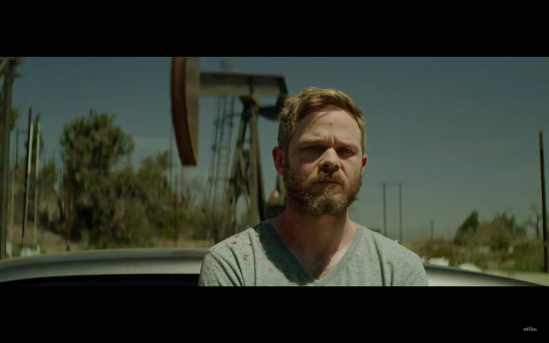 Despite the international production and filmmakers, the solid cast is compromised of familiar faces from respectable actors, starting with not-the-Elsa-“Frozen’s” Shawn Ashmore. Ashmore, who I considered to a steady part of any project – he’s phenomenal in Fox’s “The Following” with co-star Kevin Bacon, – finds himself in the shoes of a L.A. detective who has fallen by no cause of his own, but as consumed as detective Jeff Anderson is with proving his wife’s murder, Ashmore doesn’t sell Anderson’s convictions and doesn’t properly apply Anderson’s super sleuth talents to wade through the sea of angst and torment. Anderson’s also written poorly as a man who consistently lingers around suicide call-ins and has constantly has numerous visions and memories of his wife that serve little to her importance to him, serving more toward just being story fillers instead of providing a little more value to Anderson’s character. What attracted me more to “Darkness Falls” was Gary Cole as one-half of the father-and-son serial killer team. Cole takes a break from the Mike Judge and Seth McFarland humor to stretch his legs amongst the thriller genre, playing an unnamed dark toned character derived from hate, abuse, and the thrill of seeing women die. Cole’s performance is a step above Ashmore’s lead role, but still flat, flat to the point of almost monotonic pointlessness that doesn’t exalt his need to kill high profile women. “Darkness Falls” rounds out the cast with Danielle Alonso (“The Hills Have Eyes 2”) as a Anderson’s former partner turned police captain, Richard Harmon (“Grave Encounters 2”) as Gary Cole’s accomplice son, and the legendary Lin Shaye (“Insidious”) as Anderson’s mother.

While “Darkness Falls” conveys a strong, if unintentional, message that grossly sheds light on the overstepping male view toward the idea of a successful woman, director Julien Seri missteps multiple times through the dramatics of a cop on the edge of the law and on the brink of despair while also not completely rigging out Gary Cole and Richard Harmon with more conniving wit, especially when their kindred reign of terror is well versed throughout the years. What fleshes out from Ashmore’s rolling on the floor and spitting shade performance at pictures of women on his crime wall trying to get into the head of the killers and Cole’s character who relinquishes freedom in sacrifice, even after a daring great escape from a botched crime scene that involved killing two cops in the process, is this weirdly uncharismatic collapse of a story from within the parameters of a well-established cast and premise. “Darkness Falls” barely pulls out a believable crime thriller that can only be described as vanilla, a term that stakes the heart terribly knowing that Shawn Ashmore and Gary Cole deserve so much better just from their lustrous careers and polar acting styles that don’t counterbalance the dynamics at all in this film. The original title, “Anderson Falls,” is fresher salt than the stale, rehashed title change of “Darkness Falls” to, perhaps, gain traction in a fruitless action of selling more tickets, adding even more vanilla flavor.

Releasing on VOD and Digital this month is “Darkness Falls,” an unrated release, courtesy of Vertical Entertainment. Streaming services such as iTunes, Amazon, Apple TV, Google Play, FandangoNow will carry Shawn Ashmore’s 84 minute sordid themed detective thriller as well as all major cable and satellite companies. Since this is a digital screener, the audio and video aspects will not be reviewed, but if running on digital and VOD, the presentation should be excellent provided that your internet’s not sluggish and a good connection is established. I will say that the score by Sacha Chaban is against the grain with a brawny anti-brooding soundtrack more suitable for intense action than stylish poignancy than ends in uninspired ca’canny. That’s also not to say it wasn’t a good score. There were no bonus material included with the digital screener and no bonus scenes during or after the credits. Sitting through “Darkness Falls” was tough to sit through as the anticipation for the morbidity level to increase with due pressure onto detective’s Anderson’s browbeaten shoulders for a hellish ride solving his wife’s untimely death was never sated, sputtering along as a halfcocked story with performances to match.