A despondent Amy is convinced she will die tomorrow. Wanting nothing more than to be useful in her death, she wishes for her skin to be sewn into a leather jacket, much like hardwood floors are elegantly fabricated from cut down trees. When her friend Jane checks in on her once alcoholic friend to ensure that Amy hasn’t fallen off the sober wagon, she brushes off Amy’s death talk as nonsensical, ruminating verbiage, but Amy’s intense convictions of imminent death spread like a contagion, serving up paranoia, fear, and hopelessness to every ear reached. Like wild fire, the prospect of death begins to infect a chain of people directly and indirectly connected to the source, Amy, and there’s no stopping the terror that looms knowing that’ll their fate is sealed in an ill-fated predestination that is seemingly coming tomorrow. 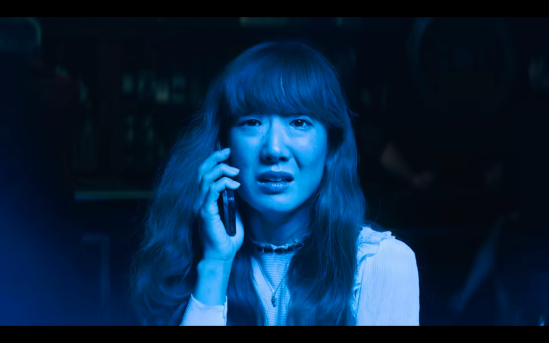 What if you knew you were going to die tomorrow? What sensations could possibly overwhelm your rationality? Are there differences in how we react between apparent death and actual death? These are all questions posed without much elucidation in Amy Seimetz’s 2020 sophomore full-feature film directorial, “She Dies Tomorrow,” coming eight years behind the writer-director’s 2012 debut road trip thriller, “Sun Don’t Shine.” Seinmetz, who has battled Xenomorph’s in Oliver Stone’s “Alien: Covenant,” tried to escaped animal masked killers in “You’re Next,” and burdened the supernatural forces of a Native American burial ground in the remake of Stephen King’s “Pet Sematary,” has wriggled her way in front of the camera with indie and big budget thrillers in the last decade, but has also found a small, but significant, auteur niche behind the camera as well, exploring the human dynamic in an avant garde veneer that involves the very core of what affects us all – death – in what Seinmetz describes it’s spread as an “ideological contagion” and how processing our determined for us death date can morbidly spill into what little life is left. “She Dies Tomorrow” is majorly self-funded project by Seinmetz, whose quoted that “Pet Sematary” paid for the film in full, and it gave the filmmaker nearly total autonomy in stylizing her vision of a dry, dark comedy with science fiction and horror elements that bridge the reality and fantasy gulf. Also, Rustic Film’s Aaron Moorhead and Justin Benson also serve as producer. Moorhead and Benson, two filmmakers who I admire quite a lot, have proven to invest and create new and fresh otherworldly features, such as “The Endless” and “After Midnight.”

Returning to collaborate with Seinmetz is the director’s lead star from “Sun Don’t Shine,” Kate Lyn Sheil, portraying “She Dies Tomorrow’s” first despaired, Amy. The New Jersey born actress has built a career working with Seinmetz, co-starring alongside her in such as “You’re Next” and in television with “The Girlfriend Experience,” the latter being co-created by Seimetz, but Sheil has also established a wealthy career on her outside the Seinmetz bubble, landing a reoccurring role on the Kevin Spacey turmoiled Nextflix series, “House of Cards” and staying steadily busy with filmic roles over the last five years that has been continues even into the new decade. As Amy, Sheil decompresses Amy’s gloom upon the world in a manner of a stumbling, lost soul trying to find ways of being useful after death. Amy’s alcoholic issues are relatively on the backbunner, adding past strife to her character, but not really the centric focus of Amy’s communicable mellow anxiety. Each of the infected express their contract in a multitude of different ways. “Poltergeist” remake’s Jane Adams engrosses Jane’s fear around how she’ll die that then spreads to her on-screen brother, Chris Messina (“Birds of Prey”) and his snarky wife, Katie Aselton (“Black Rock”) who process as a natural parental fear and duty to comfort and control what they conceive as the inevitable. As the spate of infections increase, the fear lineage evokes honesty, regrets, sympathy, acceptance, and wonder from the support cast that includes Josh Lucas (“Session 9), Michelle Rodriguez (“Resident Evil”), Adam Wingard (director of “The Guest” and “You’re Next”), Jennifer Kim, Tunde Adebimpe, Olivia Taylor Dudley (“Dude Bro Party Massacre III”), Kentucker Audley (“V/H/S”), and Madison Calderon. 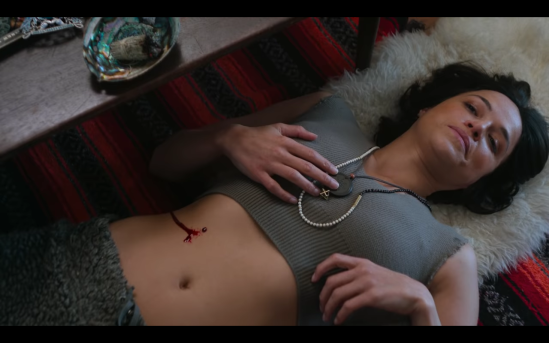 “She Dies Tomorrow” cultivates responses to the spreading of the ideological contagion rather than express just exactly how these people will die. Are they so sure they’ll die tomorrow to the point of inflicting self-harm? The story never really takes it that far to exhibit where the individuals, riddled with anxiety, their mortal status will land, whether it’s gratuitous gruesome or just nature taking course. Seinmetz makes light their becoming stricken with dying. While I mean in a more dry humor context, I also literally mean the filmmaker makes light, like the luminescence emitting from a rainbow firefly, glow upon characters’ faces inside Jay Keitel’s cinematography when death strikes their senses like an epiphany. The grim future washes away everything in their past, a key point of obsession honed in by the filmmaker that platforms the short span till death overshadows much, if not all, of our past achievements in life. The obsession is so strong and overwhelming that you, yourself, will start thinking about your own demise, whether it’ll be tomorrow or another 50 years from now, to which then sympathy for each of these characters will begin to set in and remain until the credits roll. “She Dies Tomorrow” seethes as a colorfully cosmic thanatophobia amplified by the current pandemic climate and common death anxiety, furthering Amy Seinmetz’s growth as a gifted filmmaker.

Neon presents the distribution of Amy Seinmetz’s “She Dies Tomorrow,” coming to drive-in theaters on July 31st and landing on video on demand the following week, August 7th. Since this was a digital screener of an upcoming move, there are no home video specifications to review, but Jay Keitel’s scenes are softly lit, down to Earth, and turn ethereal during the flashing of lights. The score by the composing duo, Mondo Boys, reteams Seinmetz with the soft, haunting melodies that can invoke a classical sadness and presage inside princely compositions that included interweaving Mozart’s Requiem into the mix. There were no bonus features included with this screener nor were there any bonus scenes during or after the credits. “She Dies Tomorrow” is a well-crafted, well-timed harrowing allegory on the psychological properties of coping in the face of death.

Buy the “She Dies Tomorrow” poster! Catch the film in Theaters and Video-On-Demand!