Chance Sinclair is a rebellious 17-year-old closeted lesbian and Catholic student.  After a couple of school related incidents she didn’t instigate, Chance’s parents send her to live with her despotic grandfather, August Sinclair, despite her parents’ reluctance.  August rules with an iron-fist not only with his grandchildren, but with his entire family of powerful elitists who have a dark secret – they’re actually soul harvesting demons preying on the malintents around the world and is headed by August.   When Chance’s parents want out of the family business and reclaim their daughter from August’s authoritative grip, they hire a culinary prodigy with a skill for assassinations for a grand dinner that’ll have the whole family in attendance.  Chance is ignorant of her family’s history and the balance of power is not the only stake served on the menu, but also Chance’s very soul hangs in the very midst of the Sinclair’s family game night of internal carnage. 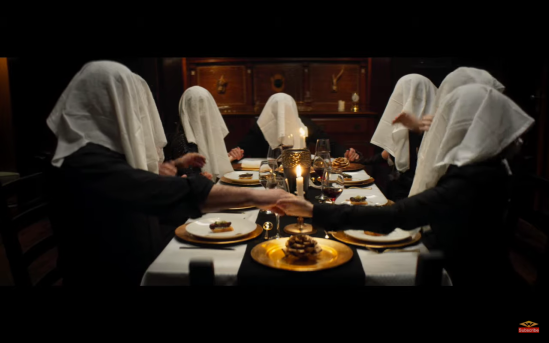 Like a Gothic storybook enclosed with deception, murder, and unhallowed demons at their last supper, “Broil” is a going to hell in a handbasket supernatural feast and an unholy coming-to-age sophomore feature from by the upcoming “Cosmic Sin” writer-director Edward Drake and co-written alongside Piper Mars.  The 2020 Canadian murder-for-hire thriller vies against the stylish similarities of the “Twilight” saga with well-groomed, well-off, and sophisticated groups of strangers bound as family from supernatural circumstances, but distills itself out the frivolous teeny-bop pulp and teen heartthrobs for a modestly R-rated cutthroat kindred melodrama by the netherworld’s most notorious soul-suckers, shot in Vancouver, British Columbia, Canada.  “Broil” Is produced by “Cabin Fever 2:  Spring Fever” executive producer, Corey Large, and first time producer Kashif Pasta with 308 Entertainment (“It Follows”) and Good Complex serving as production companies. 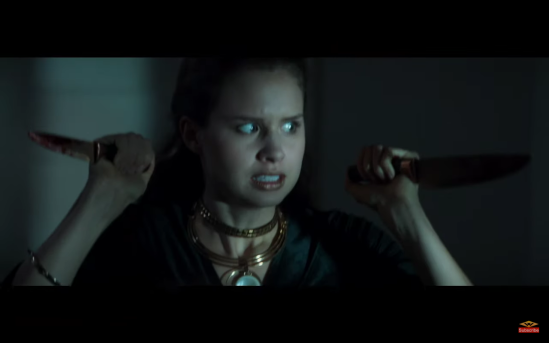 “Broil” doesn’t denote a lead character at the heart of this story, but pinpoints principles along a chaptered structure, signifying their importance by following them with an objective point of view.  The whole setup begins with the granddaughter, Chance Sinclair, who a bit rough around the edge and doesn’t play with her schoolmates, especially having an affinity for the same sex while being a student in a Catholic school, but that factoid doesn’t blossom into thing though be noted a couple of times.  Instead, Chance, played by Avery Konrad in her first principle character role, struggles with her teenage angst and hormones like any more adolescent, but she finds her educational woes pale in comparison under her family’s archaic secret ruled by the patriarchal domination of August Sinclair, a ruthless enforcer and head of the family business brought to an autocratic fruition by Irish actor Timothy V. Murphy (“Snowpiercer” television series). While Chance and August strongly convey a presence in the first act, Jonathan Lipnicki reins in the latter acts in an unexpressed spectrum performance of Sydney “The Chef” Lawson, a calculating killer taking out the transgressional trash informed by a mentor and father-like man named Freddie Jones, “Jason vs. Freddy’s” Lochlyn Munro, who may or may not have ulterior motives in exploiting The Chef’s gift for murder. Lipnicki’s work is a culinary delight in as much as The Chef’s actually culinary expertise, braising the character to eventually be the mainstay character. There are other exigent roles that seem important, but are only keystones that hold more principles roles from crumbling, such as Chance’s parents, June (Annette Reilly “Chilling Adventures of Sabrina”) and December (Nels Lannarson “The Cabin in the Woods”) Sinclair, who initiate the murder-for-hire spark that set things in motion. Rounding out “Broil” is Corey Large, Megan Peta Hill, Abby Ross, Jenna Berman, Phoebe Miu, Alyson Bath, David Hennessey, John Cassini, and Kyra Zagorsky. 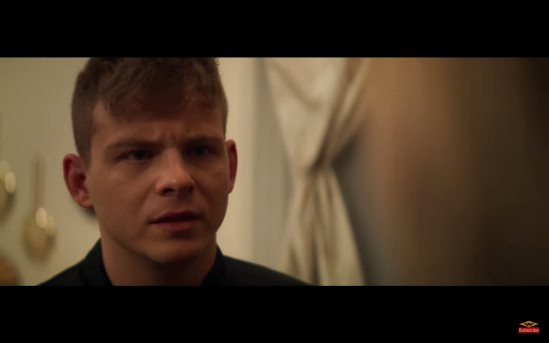 Playing out in chapters, “Broil” feels like a murder-mystery adapted from a on fleek novel written by a panache author from Switzerland, but from what I’ve researched, “Broil” is an original narrative only to be segmented to amass refined character details and redirect turn of events as they unfold. However, the chaptering aspect veers the narrative off course, careening “Broil” more toward edit oblivion that doesn’t layer the foundation properly causing as much confusion as the inhuman characters trying to decide whether the Sinclairs are either vampires, demons, witches, or some kind of incubus-succubus blend for a better part of the film. A theme that doesn’t withstand the pressures of Drake’s zigzag directional layout is the unholy atmosphere the Sinclair’s protrude into the world. Chance, who is ignorant of her lineage and of what she really is, turns crosses upside down, turns crucifix necklaces ablaze, and her family sends her unusual gifts like parceled decorated daggers as seen on sacrificial stones, but the satanic tropes cease to do little more than be hints bound to expose the Sinclair’s true selves and really nothing to do with Satan himself, leaving much of the Sinclair powers left unexplained, like their lightning speed and pulsating purple glow that illuminates in patches under the skin (another “Twilight” element?). The acting is palpable, even if it’s melodramatic and under a slew of unlikeable characters, and the story does throw a few notable curve balls, some wickedly diabolical knuckle curves involving eating a child, to intrigue an inch by inch progression of the story. “Broil” unsheathes moments of Gothic schadenfreude, but the moments are fleeting, too short and far in between, to swimmingly bask in the horror of demonic soul snatchers in the throes of a murderous coup d’état.

A delicacy unlike anything you’ve ever experienced, “Broil” is served onto a Blu-ray release as the plat de jour distributed by Well Go USA Entertainment. The unrated film is region A coded and presented in high-definition, 1080p, of a 16:9 widescreen format. Details on the image render very soft, undiscerning outlines that infuse where a person ends and the background begins, but as the lighting choices change from flared hues to more hard lighting, profiles are to take more shape. Director of photography Wai Sun Cheng, making his introduction into feature films, keeps the focus primary in the foreground, obscuring the backdrop just enough to make it still perceivable and mixes well in the extreme close ups with wide angled shots to not be a one trick cinematographer. The English language 5.1 DTS-HD Master Audio has severe troubles with Hugh Wielenga’s score tremendously overpowers everything else with a profound overlap. The composition is so unbalanced and loud that the resonating LFE completely drowns out the dialogue at times. “Broil” does not contain any feature specific special features other than a static menu containing upcoming previews of other Well Go USA films. Despite the title and the infernal nature, “Broil” is a dish served too cold with an unsavory plot of a young woman’s coming of age tribulations in midst of family squabbles and treachery that Edward Drake couldn’t quite fuse together.