Mike, a mild mannered, middle-aged man, notices a young couple moving into the vacant house next door. His mundane marriage roots out a curiosity infatuation with Jenna, a young and beautiful woman, next moving in. Jenna and her husband Scott, a fast talking exotic car salesman, have recently only have been married for the short time of four months and Mike feels something isn’t quite normal with Scott when he witnesses and overhears violent behavior from his new neighbor toward his wife. Concerned for her wellbeing, Mike, at first, attempts to interject the best way he can without over stepping his bounds by offering to assist with Jenna’s work-in- progress garden or just chatting over the yard dividing wall when Scott isn’t around, but when he assumes things become physically abusive between them, Mike is forced to do more than just mind his own business at the request of his wife and friends. Is Mike willing to risk everything, such as his long term marriage, in order to help a complete and total stranger he barely knows?

“The Neighbor” is a dramatic thriller from the 2011 crime drama “Catch .44” writer-director Aaron Harvey co-written with first time writer, long time editor, Richard Byard. Harvey and Byard attempt to explore the very common situation of what do you do when you’re exposed to marital violence and how much involvement one should put themselves into assisting the battered party. In short, you’re morally obliged to dial call 9-1-1 and report spousal abuse, but to ensure entertainment value for us viewers, the filmmakers pen Mike as something far worse – a concerned spectator. Instead, Mike wallows about by attending to his garden, working on his technical writing from home, or slicing tomatoes in the kitchen all the while being a part of the problem of the domestic violence next door and it’s not as if the violence is even in question as Jenna flat out tells Mike that Scott has a behavior problem whenever he drinks too much. Right then and there, Mike should be ringing the police the next moment a flare up occurs. Mike is the epitomized reason audiences would be vacuumed into the story as each and every one of us could potentially be a passive Mike in a similar situation. 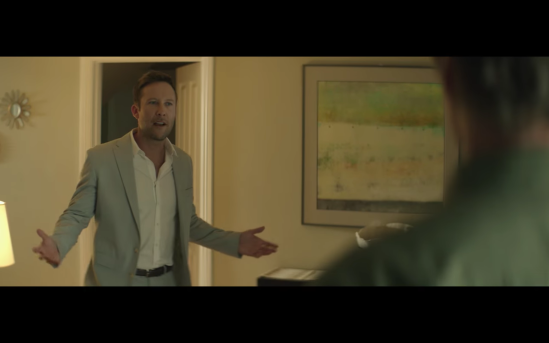 One of the more underrated actors in the industry today, William Fichtner, steps into the comfy slippers of the garden trowel wielding Mike. The “Armageddon” and “Drive Angry” Fichtner’s chiseled and unique facial features typically casts him as hard nose characters – military types, villains, etc., – but “The Neighbor” offers Fichnter a chance to play normalcy. However, Fichtner’s approach to a house husband bears an uncanny resemblance to Michael Myers from John Carpenter’s “Halloween.” With stiff, straight arms by his sides, soulless eyes, and an absent personality, Mike has the gait and the expressions of the William Shatner masked psychopath that’s churns out an awkward performance that blurs the character’s intentions between either being righteous and obsessed. The good looking couple next door are played by Australian born Jessica McNamme and Michael Rosenbaum, also of “Catch .44.” Rosenbaum plays an impeccable dick so well there’s a surefire chance that his character, the fast talking exotic car salesman, will be disliked and as a stark contrast, Namee’s channels a sweet disposition that surfaces the question, why these two are even together? Yet, the Jenna wish-washy stance with Scott makes her frustrating which Mike takes with an astonishing grain of salt. Jean Louisa Kelly, Colin Woodell, and Erich Anderson “Friday the 13th: The Final Chapter” costar. 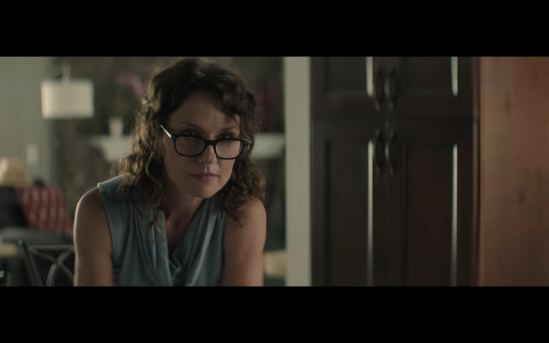 With a solid cast with a few quirks, “The Neighbor,” under the directorial eye of Aaron Harvey, should have shaped up to be an apprehensive, nail-biting thriller. Instead, some aspects of the Harvey’s film didn’t feel right. For instance, Lisa (Jean Louisa Kelly) and Mike’s marriage was never rocky; the union might have been stagnant from just the day-in-day-out repetitiveness and the longevity of knowing someone from an extended period of time, but there’s a scene when Lisa abruptly decides to throw Mike out of their house. The moment is so random and so unexpected the momentum and the weight of the story changes, pivoting too acutely to compute why Lisa would doghouse Mike over his justifiable concerns over Jenna’s safety without prior marital complexities between them. The entire film almost feels like it’s from Mike’s perspective as everyone, from his friends to his wife and son, seem to unacknowledged his presence whereas Jenna brightens, smiles, and welcomes him in conversation, advice, and even a little intimacy, but that may or may not have transpired.

The Michael Bruce Pictures and Blood Moon Creative produced “The Neighbor” is currently in select theaters from Vertical Entertainment. With a runtime of 105 minutes, “The Neighbor” will drag out under an engaging plot that ultimately goes sluggish at the tail end and even though brilliant and colorful in his prior work, Fichtner is a complete shell of his former characters as a expressionless zombie softly hellbent on saving a train wreck of a young woman from her volatile husband. Overall, “The Neighbor” falls flat to technically write how to right a situation without being caught in the middle of the situation.