Daryll, a New York City night shift janitor and decorated Vietnam war veteran, becomes obsessed with beautiful female reporter and wealthy socialite Tony Sokolow. When Daryll claims to be a key witness to a murder of one his business building’s high profile tenants, a once in a lifetime opportunity opens up to meet Tony when she’s assigned to cover the murder and as Daryll pours his heart out to the reporter, he’s also torn by his claim that could place his war buddy friend Aldo, a hapless former employee of the recently deceased and the prime suspect in the murder investigation, in jeopardy even more. Is Aldo the killer or is the mystery much deeper, tied to a world unforeseen by Daryll whose working in the depths of the building’s janitorial confines?

Hot off from her success from Ridley Scott’s “Alien,” Sigourney Weaver goes from sci horror-thriller to mystery-thriller and alongside her is up and coming co-star William Hurt in Peter Yates’ 1981 mystery drama “Eyewitness.” The film sparks a string of obsession suspense features that would span a decade and firmly place the genre into a popular notoriety among audiences who couldn’t get enough of the peeping tom debauchery. A hefty roster of talented actors also co-star, some on the verge of stardom to the likes of Hurt and Weaver, including Christopher Plummer (“The Sound of Music”) in the prime of his career, the crazy eyes of James Woods (John Carpenter’s “Vampires”), an un-grayed Morgan Freeman (“Se7en”), Kenneth McMillan (“Dune”), “Mission: Impossible” television series’ Steven Hill, and Pamela Reed (“Kindergarten Cop”).

Performances all around are phenomenal as every actor and actress cultivates their character’s purpose in the story and you can surely experience the humble beginnings to some of the biggest A-list celebrities of today; however, Hurt’s performance was one of the only concerning factors. Hurt’s portraying a modest, perhaps slightly traumatized, Vietnam veteran with an afar obsession toward an attractive public figure and his presentation was overly awkward and certainly creepy too the point where I even felt embarrassed and uncomfortable. What made the situation more bizarre was the verbal and facial exchanges between Hurt and Weaver’s characters. Tony didn’t quite seem affected by the oozing creepiness this supposedly good man seeps from every pore of his skin and she, in fact, embraces his forward, if not crossing the line, affections that would certainly warrant a restraining order in today’s society. Maybe social interactions vary from generations and decades, but this type of relationship building dialogue and scenes didn’t produce the appropriate type of chemistry between Weaver and Hurt reducing the strength of their bond.

The Steve Tesich script strummed the strings reminiscent to my viewing experience of George A. Romero’s “Land of the Dead.” Yes, you read that correct – “Land of the Dead” – and what does this zombie horror film have in common with “Eyewitness?” Well, in the 2005 film about the continuous decline of humanity in a zombie apocalyptic world, Romero had written a social commentary about the separating of social classes where, even in a dying world, the rich stayed safe in their loft, sustaining an obsolete lifestyle, and the poor suffer below their feet living in the present, but in the end, anyone and everyone is fair game for being unprincipled and for the undead. Tesich’s script does the same without being lavishly upfront and without the hordes flesh eating zombies. Beneath the obvious murder mystery lies the merger of the classes as Dyrall and Tony eventually fall for each other, but their friends and family on either side condemn the relationship, making the statement numerous times that a janitor absolute can not fall for someone as wealthy as Tony. James Woods’ Aldo becomes just another example out of many where a court-martialed and discharged Marine with erratic behavior and struggling with living a middle class life becomes suspect number one in a murder case, but with a victim whose profession was international trading, the pockets might be a bit deeper and with a laundry list of ill-will individuals. 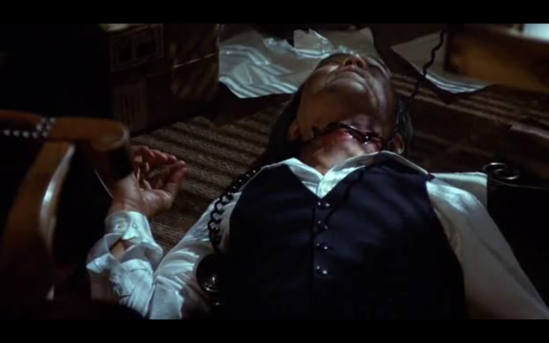 Signal One Entertainment releases “Eyewitness” in the UK for the first time on Hi-Def region B Blu-ray anywhere with a 1080p presentation in a widescreen 1.85:1 format. The video quality is far superior than, of course, it’s DVD revival with the restoration of much of the natural color tones without a hint of compression artefacts or obvious image or edging enhancements from the 35mm stock footage. The English LPCM audio 2.0 track is fair, full-bodied, and well balanced with really no issues, especially not with composer Stanley Silverman’s lively score. Signal One Entertainment certainly knows how to treat a classic film providing a slew of extra features including an audio commentary with director Peter Yates and film historian Marcus Hearn from 2005, an audio only conversation with the director along with film critic Derek Malcolm and another conversation with another film critic Quentin Faulk on a separate extra feature. Composer Stanley Silverman discusses his approach to scoring “Eyewitness” and there’s also an alternative VHS presentation of the film under one of the original titles “The Janitor.” Original trailers and TV spots round out this robust bonus feature cache. “Eyewitness” on Blu-ray is a must own with a clean and refreshing version of a this classic whodunit thriller from Signal One Entertainment!