Dany Doremus, a lonely secretary roped in by her boss to work on a big project at his home, steals her boss’s car for a joyride to the sea as her boss and his family go away on holiday. When she makes numerous stops from town to town, the townsfolk approach her, claiming and swearing they know her even though she’s never been to this particular area before. If things couldn’t get weirder or even more suspenseful, a dead body is discovered in the car’s trunk. Dany wonders if she’s deranged and crazy or just a part of a some elaborate murder mystery conspired against her. 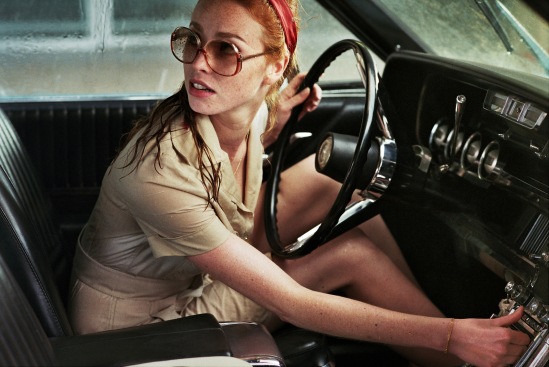 “The Lady in the Car with Glasses and a Gun” is a remake of the 1970 Anatole Litvak film of the same title. Though I’ve never seen the original Litvak film based off the award winning crime novel by Sebastien Japrisot, I’m sure director Joann Sfar’s film doesn’t stray much from the main artery that is the story, but Sfar spices up the tale through the addition of a young and feverishly heart-throbbing cast of actors and actresses. A murder mystery that sells sex more than thrills, Joann Sfar explicitly has Scottish born actress Freya Mavor and “Nymphomaniac’s” Stacy Martin do more than their fair share being sex symbol and straining the barrier of sexual tension, especially with a couple of highly eroticized topless scenes from both actresses. In a bombardment of thigh high mini skirts and tight at the waist dresses, the film setting is to reflect the 1960s to 1970s time period where if the story was in the technology age, “The Lady in the Car with Glasses and a Gun” might have had a totally different outcome.

Like any good crime novels or films, noir plays a bit part and with the Sfar remake, noir is ever present from beginning to end. Dany’s noir scenario has her being plagued by a retraced trip she’s never initially taken, being roughed up by a glove-wearing mystery person in a duo of giallo familiar scenes, and discovering a dead body in the trunk of her boss’s Thunderbird. All the pieces come together to form one big elaborate undertaking with the big twist at the end and while I’m not sure if the novel and the Litvak film do marvelous work in the detail to wrap Dany’s adventure, I feel Sfar’s missed the mark by not filing in the holes that construct a twist ending. Maybe Japrisot’s novel a bit vague too, but there’s certainly multiple voids that needed to be filled to plausibly and logically explain the ending.

As I said before, Freya Mavor’s sexiness couldn’t be any more potent. The relatively young in the industry actress has tons of potential outside the European film market. Stacy Martin has been on that fringe of the industry since her controversial breakout role in Lars von Trier’s “Nymphomaniac.” Both Mavor and Martin work well together, creating the tension between their characters while pulling off a lustrous vision. The male lead playing Michael, Benjamin Biolay, reminds me of a young Benicio del Toro with a very reserved demeanor and calculating coldness about him.