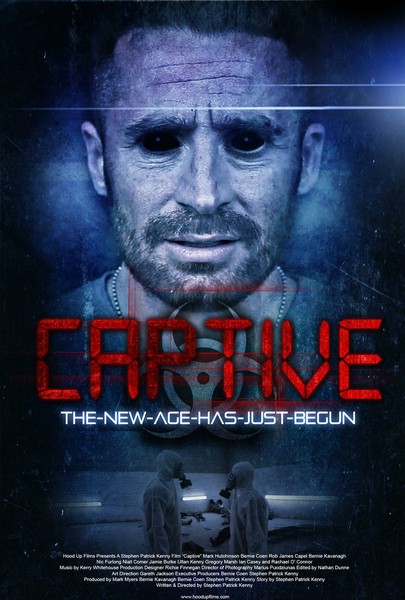 Twelve strangers awake confused and scared in a desolated and impenetrable shed. Suspicion surrounds their bafflement as they attempt to determine the reason for their captivity and who is behind it. Suddenly, a phone rings and the testing begins. The voice on the other end of the line wants something and if the twelve captives don’t comply or fail to deliver, the secretly injected virus previously pumped into them during their unconscious state will transform them into blood thirsty, demon-like creatures and fatally strike them down within 24 hours. If they attempt to escape, they will be shot down. In addition to the already extreme situation, relentless ambient gunfire and explosions rock the world outside the shed walls. The only way out, to survive the whole ideal, is to abide by their captors rules and be the last one left alive. 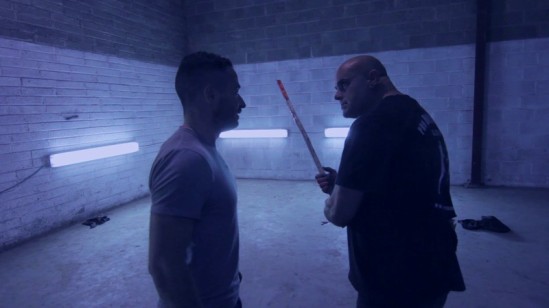 The notion of the inability to escape is an anxiety-filled fear all can relate toward; in fact, many may have had the suffocating buried 6-feet under in a pine wooden box nightmare that induces shortness of breath and sweat on the brow – I know I have. Writer-director Stephen Patrick Kenny’s film “Captive” attempts to relay that fear on a grander scale with the twelve strangers trapped inside a shed at an unknown location – the equivalent to that “pine wooden box.” The scenario puts the audience in the shoes of the characters, who are also asking themselves numerous questions that race through their minds. Why am I here? Who did this to me? What’s going on? With each turn of a minute, the questions are slowly answered, whether the characters would favor the answer or not. However, the audience is acute to a little bit more information then the twelve unlucky souls. Information, such as the two men in hazard suits placing their limp bodies into the shed and from the black title cards used to formally announce the death of each character, that a type of brutish test is being conducted and that takes the audience out from the unknown and into a solely voyeuristic perspective.

Being voyeuristic should entitle all to witness the end result of the twelve players involved, but, unfortunately, we become just as clueless and lost toward the characters’ fate and the situation around them. This hybrid role of the audience, whether we’re a part of the situation or an outside party, aches and pains the logical and rational portions of the mind. In Kenny’s sophomore film, characters come and go, Houdini-like, in and out of the story without much explanation and the same can be said about their deaths. In a tail end scene, a character is alive and in the next scene, the character’s sprawled out on the floor…dead. The kill shot, the smoking gun, are omitted. A limited budget, poor editing techniques, and use of stock sound effects result in this crude determination of characters’ final destination and leave gaping holes that sour the story’s appeal.

The director’s style is visually comparable to the outer stories of a modern day video game plot without the enjoyable interactive game play. Stocked with a heavily hazy blue tint that sears into your vision, paper mache like special effects and graphics, and black title cards that act as chapters to each character’s demise path, “Captive” is more similar to a video game than a film. What’s also concerning is the lack of character development of any kind note worthy of virtue or quality. The Kenny script focuses more on the title cards rather than structuring a coherent story on the basis of solid characters and, sadly, each character is hindered from any sympathy or concern.; in fact, numerous characters quickly become dispatched within a smidgen of their awakening and if you blink, you’ll even miss their scenes. The actors, majority a cast that has had a working relationship with Kenny, don’t quite sell film as the performances are rigid and forced upon deliveries and reactions toward their hand dealt goes unnaturally and uncouth.

Even though many flaws plague Kenny’s film, I’m glad to see horror out of Ireland has not completely been forgotten. However, I’m just not seeing much heart or creativity behind “Captive” and the hopes were high going into the film after watching a vigorous trailer that displayed promising non-stop “demon” horror, suspense, and ultra-violence. None of those attributes made the final cut, I suppose, marking Stephen Patrick Kenny’s and Hoodup Film’s Sci-Fi horror-thriller “Captive” not superbly captivating.