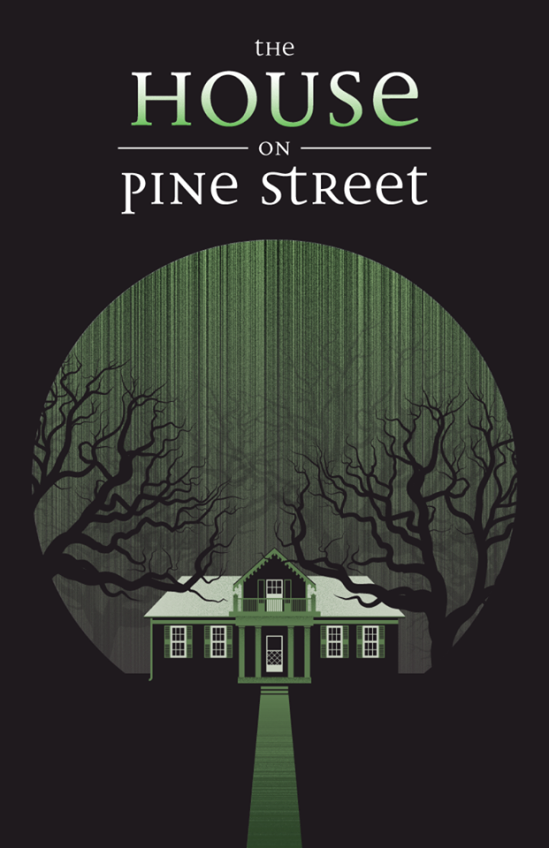 Married couple Jennifer and Luke move to Jennifer’s small hometown in Kansas suburbia after an incident with Jennifer’s pregnancy at their city home in Chicago causes concern for the baby from both Luke and Jennifer’s mother Meredith. Feeling not at home and isolated, Jennifer quickly detaches herself from everyone around her, but when spooky occurrences start to slowly reveal in their new home, Jennifer desperately needs her family and friends to eagerly believe that the house is haunted. When everything firmly believes that Jennifer might be suffering from another pregnancy episode like in Chicago, the young woman experiences a psychological horror that drives her into a blurred line of what’s she seeing is either frighteningly real or a nightmarish psychosis.

“The House on Pine Street” is a chilling, effective thriller helmed by twin brothers Aaron and Austin Keeling, who both also co-wrote the film with newcomer Natalie Jones. The Keeling twins, along with numerous short film cinematographer Juan Sebastian Baron, were able to capture alluring framing and uncomfortable camera angles, consisting of the use of medium and close up shots, that suit the film’s unsettling and haunting nature. The poetic beauty of the vibrant exterior contrasted with the bleak and rundown features inside the Luke and Jennifer’s home tell the harrowing story of where the dread begins and lingers to languish and the brothers were really able to set the entire pace of the film, prolonging out the story’s suspense, and able to create an engaging tale within about a two month time spatial difference and have it laid out logically.

Aside from the obviously talented crew, the phenomenal cast ranks this lesser known 2015 ghost film near the top. Emily Goss embodies Jennifer’s loneliness and fear through the subjection of constant ghastly occurrences. Whereas Jennifer’s husband Luke played by Taylor Bottles, even with the slick and enduring hipster hairdo, feeds off Goss’s non compos mentis situation, making the character Jennifer drown in darkness without any compassion. Personally, Jim Korinke captured my favorite performance as the neighborly quasi medium. With no acting credit to his name, Korinke’s ability to keep up and maintain with a younger, more experienced acting talent is beyond remarkable on screen and fun to watch.

Much like the film’s generic title, the story is simplistic; however, the story is without a mind blowing twist which most of Hollywood gets off on. “The House on Pine Street” speaks in underlining messages. The motif of energy keeps reoccurring throughout much of the plot, sparking the conversation that negative or positive energy will be the inevitable karma influence. If a person emits negative energy, bad juju will be the result and visa versa. While the story hovers around Jennifer’s locus, her negative, pessimistic attitude contributes to the tribulations toward other characters. The Keelings were able to subtly convey the energy message without being blatant and expositive.

“The House on Pine Street” works and works well regardless of the overused and lackluster title that has become more repetitive and an unfortunate eyesore to those scouring the retail racks, looking for an engaging thriller, but the Keeling duo are a pair of cinema prodigy twins, who with the right cast and crew can take a smaller project, like this, and polish it into gold. Second Sight distribution is set to release this spin-chilling “The House on Pine Street” thriller onto DVD home video in the UK on February 1st. Just in case you’re not completely sold, take it from me that goosebumps will occupy every inch if your chilled flesh when watching in the dark and the light.