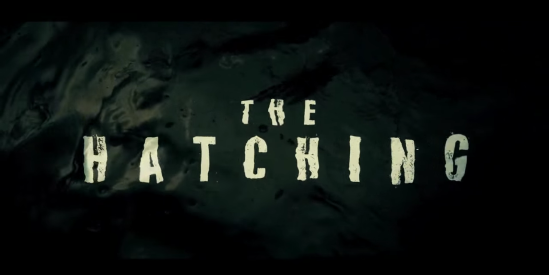 Tim Weber returns to his childhood home in Somerset to take claim over the family business from his father who recently deceased. When Somerset residents start to disappear and severed body parts are discovered, the idyllic and peaceful lands of the small village are stirred, whisking together an agitated hornets’ nest of confusion and trouble. The truth surfaces when two Nile crocodiles reveal themselves, snapping off the heads of ewes and shredding the shriveled bodies of elderly ladies. Hunting parties form and traps are set to snare and kill the semiaquatic predator, but are the crocodiles just a facade for something more nefarious? The crocodiles must be stopped at all cost, but the hidden beneath the very noses of the townsfolk stealths the true danger.

While Lionsgate’s distributed UK film “The Hatching” may sound like a serious creature feature, the Michael Anderson directed 2014 film, shot on the Somerset location, is actually a horror-comedy with tea kettle loads of dry English charm and wit. “The Hatching’s” cheekiness stems from deploring a misconception that it’s actually a creature feature story of two crocodiles lurking prey from the watery ditches of Somerset and does a good job at it. The tension stagnates of something far more sinister about Somerset is quite evident, but doesn’t slap you square in the face until the obvious pivot. Anderson is able to keep the attention on the crocodiles with the help of the story’s preface of young Tim Weber and his mate Baghi stealing two crocodile eggs from a zoological establishment and witnessing their other friend becoming crocodile dinner during the process. Yet, the farce still plays out until act three when the town masks a real threat to their residents.

To quickly sum up the impression of “The Hatching” is to be frank that if “Jaws” and “An American Werewolf in London” had a crack baby, “The Hatching” would be the epitome of that said crack baby. I had a strong inkling that “The Hatchling” felt too familiar with the John Landis’ iconic and pioneering werewolf comedy of an American backpacker becoming attacked by an English werewolf. That suspicion revealed to be more physically prominent as to learn that director Michael Anderson had worked on “An American Werewolf in London” as a clapper loader, so there may lie some inspiration. Even the townies Russell and Lardy discuss the possibility of werewolves in Somerset responsible for the killings of sheep and maybe even the disappearances and a few shots of the moment eerily donned that retro homage, an oral sign of respect to the Landis movie.

To get down to the brass tax, “The Hatching” may have the intentions to bite hard like a giant crocodile, but lacks coherency at times, as if time and space were not something considered for the sake of clarity and storytelling. The Nick Squires inaugural script is all over the place with transitions not quite hitting the mark as intended. Characters were also not set up well; point in case with Tim Weber and his employees loathing him for an unknown reason. I get why his uncle Stan despises him, but why Russell and Lardy? The butcher’s boy was the biggest exposition faux pas as his story was nothing more than a brief explanation to catch up on the events at hand.

“The Hatching” is listed as rated R with violence and gore, accompanied with brief sexuality and drug use. The crocodile gore is modest at best with more of the gore being delivered by way of other means and not by the two beasts. The overall horror related effects weren’t shabby or shoddy as most of it, if not all, were practical effects and, by the grace of God, not computer generated. Granted, scenes of the crocodile out of water were obviously of not a real creature, but still real looking enough to scare the bejesus out of some poor soul. Real enough to parade around the streets of Somerset on a shopping cart, as in one scene with Russell and Lardy.

Lionsgate presents “The Hatching” DVD in a 1.85:1 widescreen presentation with an English 5.1 Dolby Digital audio mix. The DVD also comes with an digital ultraviolet that can be played on any device. Bonus features include a behind-the-scenes segment entitled “Beneath The Surface of The Hatching” and a trailer gallery. “The Hatching” may not be for everybody; with the dry English comedy and the sub-genre identity complex, the film may even piss off some hardcore horror fanatics, but I firmly believe “The Hatching” has more respect for it’s elder films than it does in itself and that’s the quality most films seem to hone into for a quick stint of popularity.