Coping with the sudden death of their parents, twins Malcolm and Isabel Rademacher take a trip with their friends to the family lake house in Bear Lake, Michigan. The siblings ultimately neglect their friends, forcing their companions to abruptly leave the lake house without Malcolm or Isabel’s knowledge. Soon after, the two experienced a home invasion by two masked individuals, barely escaping with their lives. Feeling alone, isolated, and ill-fated, Malcolm and Isabel steer to two different paths: Isabel seeks professional counseling, while her brother sank deeper into his own despair. Malcolm spends most of his time at the lake house, digging into the lake’s frozen over to reclaim one of the mask’s of the home invaders. Isabel fears that Malcolm’s obsession threatens her safety, as well as her counselors. 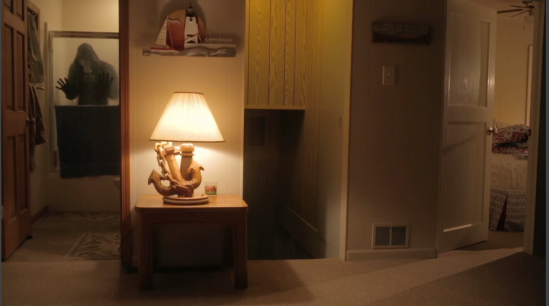 “The Horror” is a story of one person’s traumatic event turning deeper into the darkness, taking a turn for the worst, and becoming overwhelming with rage and insanity. Director Jerry J. White III’s first solo feature thriller features a talented cast with Raymond Creamer, “WTF!’s” Callie Ott, and Schell Peterson headlining. Raymond Creamer also pens the script and Creamer’s character becomes centric heavy; an internally emotion individual just ready to explode from a slow burn. However, the film is literally a slow burn, creeping along, without being too frighteningly creepy, at a snails pace that doesn’t translate into Malcolm’s transition into madness. While in session with her counselor, Isabel states her brother is changing and we see Malcolm’s odd behavior at the lake house, but nothing suggests menacing turmoil. Until Malcolm randomly shows up at the counselor’s door step. 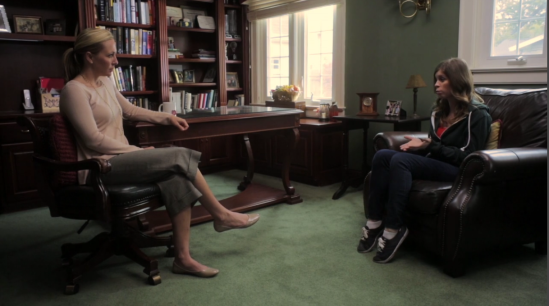 Raymond Creamer’s Malcolm is clearly the fearsome force of the film, flying solo for most of his scenes. But when Creamer interacts with others, he’s absolutely frightening. This makes Creamer outshine the rest of the cast and leaving no yin to his yang, unbalancing the film in oppositions. Creamer’s dark, bleak attitude and tone is solid throughout to where hope feels like a memory and a part of natural extinction. If Isabel is suppose to be the light, then her character must have had black out shades on as she can’t withdraw herself from the shadow casted down from the giant that is Creamer’s Malcolm. The unbalance creates no passion for revival and no sense of the grim reality resolving itself. This ultimately begs the question, what are we, the viewer, suppose to be hoping for?

“The Horror” story is also very encrypted. Explanations aren’t rapid nor are they delivered as an easy handout. Everything from physical metaphors to character dialogue can have an underlining meaning, sourcing “The Horror’s” entertainment value out to be another hard sell. The film’s marketing focused “The Horror” as a home invasion sub-genre film, but that particular scenario only lasts mere minutes that leaves more focal points on Malcolm’s odd behavior and Isabel’s therapy sessions explaining Malcolm’s odd behavior to her therapist. Also, the finale is wide open, again more underlining, that results in no concrete conclusions on where we leave Malcolm, holding an axe, invading Isabel’s counselor’s home.

The indie thriller “The Horror” is released on Digital VHX and limited edition VHS courtesy of Moondog Media. Jerry J. White III’s freshman film circles around being a Hitcockian draft of a modern day thriller with day of reckoning performance by writer-star Raymond Creamer, but pieces are missing or omitted to actually have “The Horror” come full circle.

One response to “The Evil. The Horror review!”