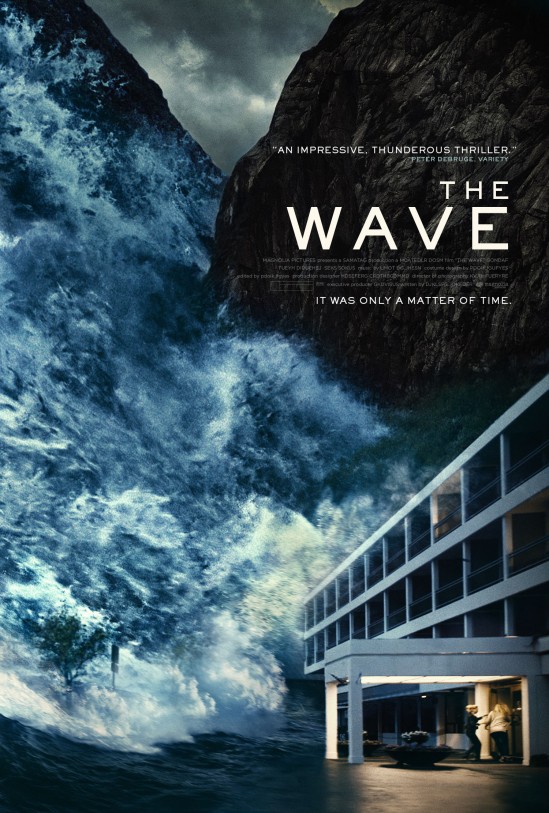 Local geologist Kristian, of the small lake side town of Geiranger, and his family pack for their start of a new life in the big city where Kristian has offered a new job. But when seemingly insignificant activity in the Åkerneset mountain that surrounds the nestled Geiranger displays on first alert’s monitors, Kristian fears that his beloved town will be washed away by the possibility of an 80ft tsunami created by a mountain landslide. Unable to leave town, Kristian stays one more night; a night in which a landslide occurs, creating a massive Tsunami heading straight for the heart of Geiranger and Kristian only has 10 minutes before impact to alert the town and escape with his family. 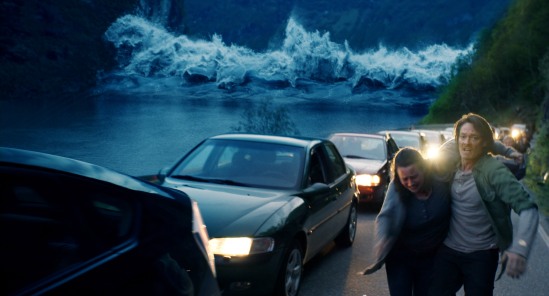 Norwegian’s 2015 natural disaster-thriller “The Wave” aka “Bølgen” is a landslide victory for director Roar Uthaug. “The Wave” funnels disaster into a single locality where as Hollywood tends to doll up and glossy disasters films, Roland Emmerich’s “2012,” Steve Quate’s “Into the Storm,” Brad Petyon’s 2015 “San Andreas” starring Dwayne Johnson just to name a few, that hyper peril the catastrophes into a global event. The focus becomes too spread out and the parlous state is diluted amongst the characters if the catastrophe is affecting everyone in the world. To pinpoint an area or a region isolates the drama and the thrills resulting in more of an impact upon the characters. On a global scale, characters can escape with ease because the space is vast and non-constricting, but in Geiranger (which is also a real place with the same very real threat), a fortress of mountains loom over the town, higher elevation is safe haven, and the possibility of escape is not so easily achievable.

Academy Award winning The Revenant star Kristoffer Joner plays the heroic lead in Kristian who fights and claws his way through disaster and destruction. Joner isn’t bulky like Dwayne Johnson, but has a more down to earth appeal that’s more appreciated than Hollywood’s grander is better ideal. But like the “San Andreas” conquerer, Kristian is a family man trying to save his wife and two children. Joner’s Kristian reminisces a much older disaster film involving a small town with a Mount St. Helens explosion. “The Wave” story has Kristian with inklings of forthcoming disaster and his fears are put aside in the interest of tourism. The 1997 Roger Donaldson film “Dante’s Peak” compares very similar with Pierce Bronson’s Harry Dolton has the same concerns, but the town leadership ignores the facts and only has dollar signs on the mind. When disaster strikes, both Kristian and Harry stay behind to save whomever they can.

The cast rounds out with a enormously talented cast in “Dead Snow’s” Ane Dahl Torp, Jonas Hoff Oftebro, and Fridtjov Såheim. Their working dynamics are accomplished by their individual challenges due in part of the threatening tsunami wave and the second half of obstacles that comes post-event to where Kristian and his wife Idun must now stay alive to find each other through a girth of destruction from high elevation to sea level. The script is penned by John Kåre Raake and Harald Rosenløw-Eeg and I praise their storytelling in creating worthy characters and developing the plausible cataclysm on paper.

The special effects rival the big boisterous effects of Hollywood. The menacing tsunami means business on screen was created under the supervision of Pål Morten Hverven and splayed on the natural blue hue heavy and tone setting cinematography of John Christian Rosenlund. Usually, giant waves in Hollywood just can’t cut that CGI feel. Uthaug’s wave crests with such realism it’s frightening and to experience our characters at the moment of impact makes you never want to go in the water again – forget about giant man-eating sharks, its giant killer waves you have to worry about. Uthaug puts the viewer right in the path of an immense wave, capturing all the fear and intensity and the breathtaking aspects of simulating a dire situation.

Magnolia Entertainment releases the Norwegian disaster flick in Theaters and On Demand. Magnolia courtesy sent me a screener link so I am unable to comment on the video and audio quality. Also, there were no extras included in the screener as it’s solely a feature. “The Wave” washes over Hollywood’s big budgeted calamity films that’s been released over the past decade and will have you holding your breath from start to finish and long after the wave has subsided.