Ever since he was a small child, Marco has been haunted by a malevolent presence inside his family home. The nighttime darkness has become Marco’s most feared adversary, staying up late and sleeping with the lights on has been molded into the normalcy of his life. While recollecting his childhood, a happy and tragic period in his life, Marco tracks downs and locates a Curandero, a Witch doctor of sorts, named Luis Ortiz, hoping for a resolution to the spirit’s relentless torture before Marco’s son becomes the spirit’s next target. The unorthodox Ortiz discloses a self-exorcising ritual that only Marco can perform to ultimately rid Marco’s family’s curse. Armed with ritualistic candles, a barrier of salt, the holiness of water, and a slither of courage, Marco transforms his childhood home into an evil eviction dwelling that will be the last stand. 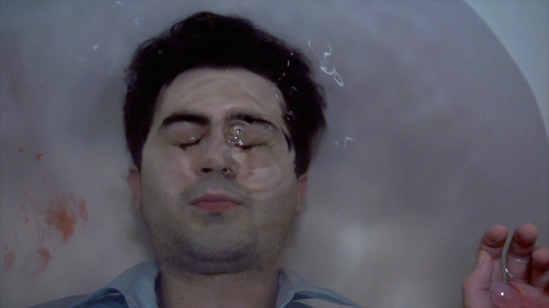 Director Jon Garcia’s first step into the horror genre with “The Hours of Daylight,” a ghost film through-and-through, starring Quinn Allen as Marco. Set within the confines and on the outskirts of Corpus Christi, Texas, Garcia’s uses the industrial and river-ridden backdrop to contrast a stark outline between the metal and the nature qualities of the coastal city, a demarcation dividing the otherworldly evil versus the organic man. However, the diverse landscape is only a embellished blanket over a lingering underdeveloped story written by Garcia. Marco spends much of the time wandering the land, pondering the what ifs of his past, and doing a lot of soul searching in order to build courage against a lifelong and unknown force, but the story goes stagnant for a good portion of the first two acts doing nothing to motivate and build upon an established character from early into “The Hours Till Daylight.”

Interesting aspects of the film such as Curandero Luis Ortiz and the stricken girlfriend of Marco left a befuddled teaser in a Quinn-centered story. Dan Braverman (Dylan Dog: Dead of Night) portrayed the Curandero, a character whose disability, threatening protection, and greedy candor made a highlight when Marco comes calling for unconventional assistance. Braverman’s “gangster” charisma overpowers Quinn Allen’s timid and drab performance of a desperate man on a mission to do and try anything to end his family’s suffering. Marco’s girlfriend, credited to Sarah Jannett Parish, begin to experience the affects of Marco’s torment as the apparition clings onto her and their unborn son, pursuing a legacy of spirit attachment. Again, the scenes are brief and unexplored; these scene would heighten a clear and present danger that provokes Marco.

I previously read that the slow pace of “The Hours Till Daylight” was well worth the wait at the finale. I disagree. The finale was better with a blue tinted, “not-of-this-Earth” force, naming itself Hate, makes a confrontal appearance when Marco challenges it and though the ghost effect does the job, final bout lets the air whoosh out, deflating any kind of tension and excitement right out of moment. Technical details crash Garcia’s initial horror achievement and its the little things that create an atmosphere. Garcia has an eye for horror, but not the eye it needs to be more defined in it’s training to capture the tiniest of details that makes a scene, or a movie, truly scary. Whether or not Garcia’s intentions we’re to display a blatant ghost thriller or to exhibit Marco’s severe mental distress stemming from the tragic loss of his sister and his emotionless father doesn’t matter if the film isn’t technically and emotionally sound. Garcia’s film isn’t technically sound and borderlines being emotionally there, but falters through the inconsistencies.

Breaking Glass Pictures distributes the 84 minute not rated DVD of the Jon Garcia’s Lake Productions feature film presented in a widescreen 16:9 aspect ratio on a singer-layered disc and the video quality is solid sans some compression artefacts. The Dolby Digital 5.1 audio mix could you some work leveling out of the LFE with the audio tracks. The special features include an in-depth look into the behind the scenes of “The Hours Till Daylight,” the film’s theatrical trailer, photo stills, and other BGP promotional trailers. Overall, “The Hours Till Daylight” atmospheric creepiness bleeds in the conformity of filmmaking, offering nothing new and unique to the psychological horror thrillers. Director Jon Garcia has talent and ambition that needs tweaking and more experience in order to accomplish horror at it’s scariest.

Buy “The House Till Daylight” at Amazon!