Fun-loving couple, Jen and Farhang, seem like your average young twosome. Underneath the common surface, they plot a sinister murder of a random stranger. Toying with hardware store supplies and dissecting the knowledge of the human anatomy, Jen and Farhang are well prepped to tackle the abduction, the murder, and the disposal of a human being, but when Jen’s obsessive nature can’t hold back her desire to kill any longer, the couple’s relationship will be harshly tested when a hesitant Farhang is unexpectedly confronted with Jen’s opportunity to kill a kind-hearted dinner guest and decides to pull out from their ghastly thought out preparations that results turning a potential grim bonding experience to a deadly relationship fallout.

“Capture Kill Release” is the 2016 Canadian film from co-directors Nick McAnulty and Brian Altan Stewart. McAnulty also penned the script. The handheld POV thriller has a story that places Jen and Farhang’s union in a familiar, yet deceiving manner, coupling routine relationship quibbles and desires with an unorthodox principles shared amongst them. While acting upon their romantic affair in the archetypes that include one-sided back rubs, jointly frustrating shopping adventures, and an infinite amount of trivial bickering, the dynamic between them feels no different from ours with their interaction with each other in their isolated internal pact being very relatable for audiences with partners or had the experiences with former partners. Enormous, thick tension sets the foundation for “Capture Kill Release” that continuously mounds an already pressurized and emotionally compromised partnership, strained to the brink of chaos that’s hard to dig out from under. 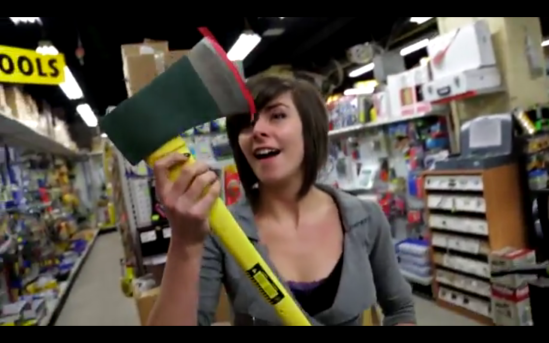 McAnulty and Stewart cast unknown Jennifer Fraser as Jen, much of the cast keep their namesakes with their respective characters, and Fraser, placing aside her remarkable beauty, inarguably locks in Jen’s sociopathic charm. Jen’s manic personality, jumping from conversation piece to conversation piece without smooth transitions and unable to focus without the determination to kill on the mind, contrasts sharply with the more reserved and constant Farhang, a role awarded to Farhang Ghajar who has worked on the directors’ prior film, “Uncle Brian.” Farhang’s conservativeness bares an ugly unconfident image that Jen wholeheartedly exploits, nearly forcing Farhang to go along, or play along, with Jen’s disturbed fantasy. Farhang Ghajar simply plants his character in a shot without much a change between appearance or delivery whereas Fraser frequents and embraces more everyday changes, including even minor ones like her hairstyles that seem to change every scene. Polar opposites, homeless guy Gary and ‘Rich guy’ jerk, round out the significant characters with actors Jon Gates and upcoming “Exorcism of the Dead” star, Rich Piatkowski.

In retrospect, “Capture Kill Release” feels rather depressing. The angst that’s imploding from within the Jen and Farhang bubble touches upon the everyday relationship attributes where couples fight or couples unite in not so extreme measures. Jen shows no empathy or sympathy for anybody with the exception of Farhang, a grappling, fleeting emotion to cling on someone who loves you for you. To further the depression, the recent hike in POV films beats into us the obsession with vanity. The camera, no matter the capacity, is a vain concept and McAnulty and Steward’s thriller spares no expense of arrogance when Jen can’t put down the camera, no matter how much Farhang pleads and persuades her, but If I were an amateur plotter toward killing an absolute stranger, I wouldn’t be a complete novice and record my handy work. This is where McAnulty builds in an unspoken caveat that Jen has a passion for filmmaking, dreaming big of directing, one day, her own feature, a notion that’s explored more during her rooting of her mother’s stored VHS collection from Jen’s childhood. The filmmaking approach to Jen’s obsession loosely bounds the implement of the handheld and feels forced like a last minute decision, especially when genuine home videos of Jennifer Fraser are cut into the story that’s out of place.

Midnight Releasing has released “Capture Release Kill” as a high definition online streaming video feature. I was supplied with a screener and can’t comment on quality or bonus features, but the co-directed film is available on these formats: iTunes, Amazon Instant, Google Play, Vudu, XBox, FlixFling and more. Even with the brief moments in gore, the blood runs extra thick with sickeningly realistic and shocking scenes of butchery. Gory found footage, such as “The House with 100 Eyes” or the more viscerally vigorous “The Butcher,” have been gaining momentum in their popularity with the handheld camera bringing a little authenticity to grisly murders that are on the other side of the spectrum of being a very anti-Hollywood concept that less sensationalized, but devilishly effective, on a budget. Throw in a handful of motivated and talented actors, such as Jennifer Fraser and Farhang Ghajar, in this semi-exploitation gore-thriller and you can strike gold with “Capture Kill Release” that’ll please even the harshest of found footage or handheld camera critics.