On Christmas day, Diane, a widowed mother, has her dysfunctional children and their families over to celebrate the festive holiday at the remote family home set in the countryside Outback. When a black cloaked stranger with a face wrapped in white cloth strips arrives at her doorstep, Diane’s good heart and generosity invites the peculiar man inside in order to not celebrate Christmas alone, but when the religiously zealot stranger reveals a letter and begins to read from it out loud, the mother of four is shocked and angered by the content and violently has him thrown out of the house, threatening him to never return. As night falls and all is calm considering the families offbeat relationship, the stranger lurks outside, waiting to seek deadly vengeance upon a family that houses dark secrets; secrets written on the pages of the stranger’s letter that connect him to Diane and her four children and he’ll stop at nothing to unearth the truth, to get the answers he desires, from Diane, even if that means slaughtering them all to pieces to get it!

“Red Christmas” is the Craig Anderson written and directed holiday classic that spills a lot of blood and sucks out completely the christmas spirit. Under the cloak of a prevalent hot and debatable topic, the social commentary aspect of “Red Christmas” blends an unapologetic slasher with turbulent subject matter that can strike chords with just about everybody, especially parents with special needs children. However, Anderson owns a black horror comedy wrought hard in exhibiting a family with unintentional aspirations to be the worst family in the world with eclectic characters ranging from religious fanatics, to closeted perverts, to pot smoking stoners, and putting them all in one house seems to bring the worst out in all of them on a day where sharing is caring and to pit them against a deadly stranger that forces them to build a malfunctioning opposing defense that works as well as a football bat.

“E.T. the Extra-Terrestrial” and “Cujo” star Dee Wallace headlines as the mother of three, Diane, and the recently awarded lifetime achievement winning actress’s exuberant strong will and determination of being a badass, kickass mother remarkably unearths Wallace’s natural killer instinct to be an on-screen protective den mother of her children played by Australian actresses Sarah Bishop as the acolyte daughter to Janis McGavin as a inconsiderate pregnant stoner. The relatively unknown Deelia Meriel played the third sister as a free-spirited artist with a dark personality. The fourth child is a key player to the plot so one of the most important roles to the story was awarded to Gerard O’Dwyer, a humanitarian actor who brings encouragement and awareness about Down Syndrome, and the actor uses “Red Christmas” as an appropriate platform to continue his ongoing fight against societal stereotypes while showing off his talent for the theatrics. “Rogue’s” Geoff Mortell and David Collins are hilarious when undertaking their respective roles of a likable laid back uncle with a penchant for the pot and a curiosity sheathed Catholic pastor unsure how to find faith in a faithless house. Rounding out the bunch is Bjorn Stewart, Anthony Jensen, Robert Anderson, and an masked Sam Campbell as the cloaked villain Cletus. 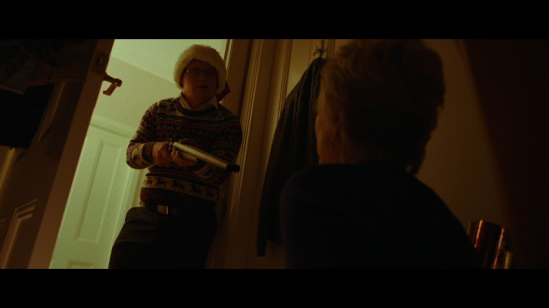 When noting the technical portions of “Red Christmas,” the practical special effects, under the Craigfx team helmed by Craig Anderson and Doug Bayne, implemented to create a mixed bag of horrible deaths is one particular aspect worth mentioning. Just enough to tease the tip of the gore hounds’ testicles while not being submersed in the super-soaked overkill that indie slashers take route now-a-days. Instead, AFI award winner Craig Anderson kept his moments of axing off characters very clean, superbly neat, and visually attractive, honing in on the maniacal killer aspirations in order to create kills worthy of more established Renaissance slasher icons and when the killing begins, Anderson makes certain heighten the tension by importing a vary of vibrantly hued filters that light up scenes like retro-colored Christmas light bulbs. When considering the character development, Cletus, visually, is jarring, like seeing the Grim Reaper in the flesh (or is it bones?), but the character’s written erratically enigmatic in a sense that most of Cletus’ brief backstory is quickly explained through flashbacks in the opening credits, leaving not enough to explain the amount of how deranged and how creepy a bloke like him is and while “Red Christmas” puts Cletus’ motivations right upfront, right on the Christmas Turkey, a subsequent question mark still lies hanging over our noggins about the full and complete story of Cletus and his ill-advised demeanor.

Artsploitation Films proudly presents Craig Anderson’s “Red Christmas” that’s currently playing in select theaters near and far and soon to be on home video come October 17th! For now, a DVD-R screener was provided for this particular review and so I am unable to comment on the audio and video quality. There were also no extras available on the screener. “Red Christmas” harnesses inspiration from other cult Christmas classics, horror and comedy alike, while tackling head-on today’s tough fiery topics like women’s rights, abortion, Down Syndrome, and how people deal with regrets in their present and past. As genre fans, October will always the Christmas month for horror and after thoroughly enjoying the dementedness of Bob Clack’s “Black Christmas” to start the night of mischief off right, make sure to pop in Craig Anderson’s psycho-cinematic “Red Christmas” to totally ring in the complete holiday fear!

Get “Red Christmas” gift for the holidays!