Her night was supposed to be a wonderful occasion of celebration, a night to showcase her lustrous career as an established actress, a night where she was set to receive her crowning lifetime achievement award, but when the gowned Amanda stepped into a luxurious, fully-loaded limousine, the night that was to be a collective jubilee of the last twenty-years of Amanda’s life will be turned into a terror ride of unspeakable acts in the name of pure hatred. Once inside, the limousine’s inescapable locks detainee Amanda as a voice behind a voyeuristic camera commands her every subversive move and a sadistic chauffeur uses pain to thwart any of Amanda’s attempts of refusal in on an interrogation on four hellish wheels.

“The Glass Coffin,” aka “El ataúd de cristal” is a 2016 Spanish thriller from first time feature film director Haritz Zubilaga and co-written with Aitor Eneriz. From the moment Amanda steps into the limousine built like a tank, Zubilaga’s film goes from zero to sixty in a matter of minutes with thick tension and high horsepower suspense. “The Glass Coffin” is a depraved film. This isn’t a sugar-coated stuck in a glass box Hollywood thriller like “Phone Booth.” Oh no. Zubilaga and Eneriz hitch your emotions on a tow bar and drag them through the filthy muck without as so much of a care. Is this a game like Jigsaw would construct in “Saw?” No traps or snares here, but there’s an ominous shroud of mystery behind Amanda’s captor that could certainly give Jigsaw a run for his money. “The Glass Coffin,” in fact, goes more in tune with Joel Schumacher’s “Phone Booth” when considering the villain. Well, more like a Eurotrash, alternate version of “Phone Booth” antagonist anyway because aside from deriving the guilt and the sin from Amanda, there’s a sleaziness about the captor whose presence becomes more and more gothic the closer we learn more about them on top of their already extreme methods in the right-the-wrong stance. 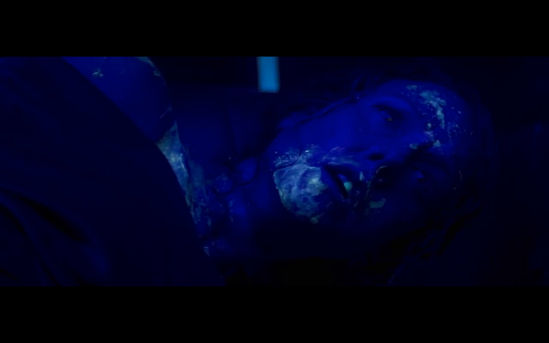 Very similar to most films with a slim-to-no cast, like the Ryan Reynolds’ thriller “Buried, “The Glass Coffin” fits the bill as a one actor film. Paola Bontempi stars as the targeted starlet Amanda and the Canary Islands born actress musters enough courage to accept such a punishing role where her character’s humility and pride stems from a base layered motivation in not wanting to become the masked Chauffeur’s punching bag. Amanda goes from high time to gutter low in an ugly show of stripping moralities and ethics in order to reveal one true self. A pivot does occur, turning the shredding of facade into plain and simple revenge that becomes the flashy bullet points of European horror and Bontempi changes with it in one fluid motion of character revival and redemption. 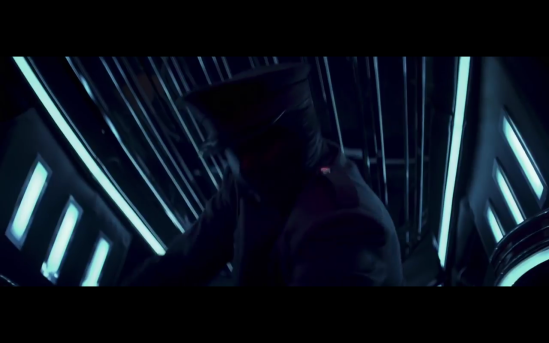 The diabolical game is, well, diabolical and sincerely rich in providing an attractive story, but the film doesn’t go without it’s problems. Whether lost in the Spanish translation or just simply unexplained, an opaque mystery clouds Amanda’s captors, especially with the maniac Chauffeur and his bizarre relationship with the planning perpetrator, that puts a sour afterthought into analyzing “The Glass Coffin.” The Chauffeur was one realistic element of an intriguing conglomerate that tipped the ice berg of sinister deplorability and I was yearning for more of that; instead the game turned, the plot transformed, and “The Glass Coffin” took an approach that routed far into left field. Not a bad route to take as, like much of Zubilaga’s film, the moment had me at an astonished state as the film continued to keep me guessing what was going to occur next.

MVDVisual and Synergetic Films distributes the Basque Films production, “The Glass Coffin,” onto DVD home video. Short in giving any sort of physical or emotion breaks, the 77-minute runtime feature is presented in a vibrantly engrossing widescreen presentation and while at times soft on the auxiliary background, the image quality is flashy and sharp surrounding Amanda. Darker scenes in the tail end lose quite a bit of definition that makes eyeing the moment difficult to capture. The Spanish 2.0 stereo mix does the job and profusely invigorates the voice behind the camera, a voice made of nightmares and all that horrifying in the world. The English subtitles sync well, but I spotted a couple of typos along the runtime. There are zero extras on this release and even though a smidgen of behind-the-scenes material would have been curious to view, the film is a simple bliss. “The Glass Coffin” arches over the niceties and lands right smack into obscenity to destabilize integrity in a cruel ride of exploitation. I wanted more, the unfiltered, fully unadulterated, story of Amanda and her polar opposite antagonist, but I’ll settle for the Cliff Notes version. For now.

A Must See! “The Glass Coffin” to purchase at Amazon.com!