Good for nothing Buddy and his two-bit working girl wife Sam bicker slangily about their sexual performances. As Sam lays nude in bed and a naked Buddy flips through a sleazy magazine in search for the new positions to experiment, the two become inspired to ravage each others’ privates all the while expletives toward one another fly. Soon, Buddy decides to start snapping photographs of his nude wife as part of a plan to create an adult spread, like in the magazine. Deep inside Bat Pussy’s headquarters, a tingle in her twat informs her that somebody, somewhere is creating porn in her holy Gotham City and she quickly dresses from nightgown to bat suit to spur into action. The not-so-caped crusader jumps onto her Hoppity Hop and makes haste across town to intervene, but as soon as Bat Pussy dives in to stop the perversive pornographic nature, she dives right into the fold of lustful, foulmouth appetites. 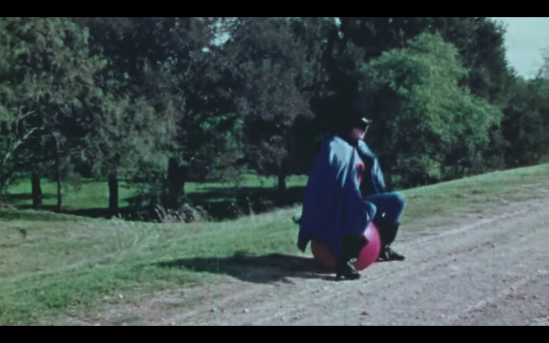 “Bat Pussy’s” gridlocked and effortless plot isn’t much to write about unless a bonus movie accompanies it and, in this particular release, “Robot Love Slaves” waits to be received in the bonus material. The bonus feature tells the story of Clark, a mad scientist who creates pleasure gifting robotic women in spite of a conniving wife whose scheming to be handicapped to steal her Husband’s groundbreaking work and be in the arms of her illicit and conspiring lover, Dr. Dicks. Clark constructs four pleasure bots, testing two of them on his friends with their specific built in sexual qualities, and keeping two for himself until the very right moment to strike against those who seek to dethrone him of his creation.

“Robot Love Slaves,” also known as “Too Much Loving,” is another early 1970s stag film. The science fiction sexploitation arouses a little better than the main feature and consisting of a plot that starts from A-to-Z and more striking women involving Sandy Carey (“Drive-In Massacre”), Sandy Dempsey (“Country Hooker”), and Candy Sampler (“Flesh Gordon”). Though roughly and technically hardcore, “Robot Love Slaves” is more softcore not by directorial design, but by edited manipulation that serves as a drastically cut-downed final product; nonetheless, the overall tone plasters a more earnest setting of deception, sadism, and pleasure rather than fooling around in a waste of runtime. Billy Lane and Adam Ward costar.

AGFA and Something Weird Video’s MVDVisual distributed “Bat Pussy” and “Robot Love Slaves” is a restoration of cult bric-a-brac right onto Blu-ray home video presented in the original aspect ratios of 1.33:1. “Bat Pussy” has been through a 2k scan from the only surviving 16mm print in existence found in the back room of Paris Theater in Memphis, Tennessee. The restoration puts the pieces in order that result in a slightly washed glaze from the dated print. Scratches and grain remain evident, but, like the not-so-hardcore material, nothing too obscene. The mono audio track is more interesting with pieces of the audio track removed upon the unknown director’s direction; during some points of the awkward romping, the audio would cut out, Buddy would look up, audio would come back in, and Buddy would say, “what?” and then the audio would cut back out. You’d have to see hear it to believe it. “Robot Love Slaves,” which also went through the 2k scan from the 16mm elements, suffers far worse from father time. Doesn’t help that the film is also heavily cropped and edited to avoid being extremely explicit. The audio track cuts in and out near the end, popping with distortion under a low ranged ceiling, and flushed with hisses. Bonus material includes a commentary track from Something Weird’s Lisa Petrucci and Tim Lewis, crime-smut trailers and shorts from Something Weird Vault, and liner notes by Lisa Petrucci and Mike McCarthy. The vivid and hilariously illustrated “Bat Pussy” blu-ray cover is perhaps the most remarkable aspect of this release. Though both films are of unknown origins and much of the cast and crew are an enigma, “Bat Pussy” and “Robot Love Slaves” revel in a sexploitation realm all their own with wish-washy filmmaking and poor, but exuberant, performances from a cast who never spoke of these two, under an hour, cult hits ever again!