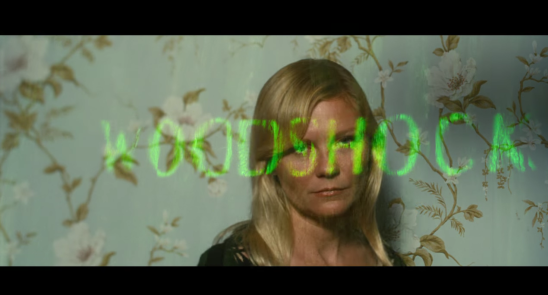 After suffering the tremendous loss of her in-home hospice cared mother, Theresa descends into an inescapable state of grief and severe isolation inside her mother’s woodland home. Stumbling through life, she manages to show up at work, a cannabis distributor in town, with the verbal encouragement from her eccentric boss, but Theresa’s mind can’t grasp the reality of the situation and loses focus resulting in another tragic loss when she mistakenly hands over fatally potent pot to the incorrect customer, subsequently a friend. Along with grief and isolation, guilt comes into the fold and she begins lighting up her own stash of mind altering cannabinoids that thrust her mindset into disjointed delusions and sleepless strolls through the forest. 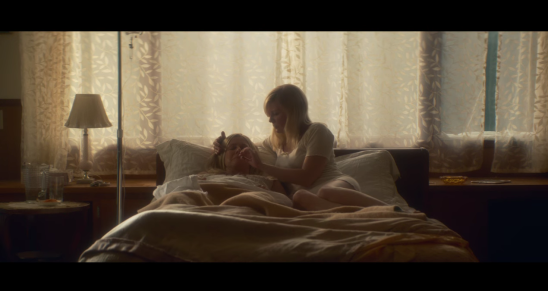 “Woodshock” is the 2017 drama thriller directed by two sisters: Kate and Laura Mulleavy. Credited as their freshman film, the Mulleavy sisters embark on an internal, unhinged perspective from their main character, Theresa. With that in mind, the filmmakers’ use of nature has both a symbolic and practical substance that paints the inner workings of Theresa’s thought process. Shot on location surrounded by the giant red oak trees of Northern California puts Theresa, this tiny human being, right smack dab in the middle of ginormous towers of pure ancestral nature and unable to fathom the full scope of the trees metaphorically explores how Theresa is unable to fully comprehend the overwhelming amount of emotions she ultimately succumbs to that lead her down a darker path. Nature, whether trees, butterflies, or, more so in general, landscapes, becomes a familiar motif throughout the film with the trees being the most repetitive aspect being exhibited in numerous scenes of being harvested by loggers, stripped and stored at mills, and lingering remnants of their once intact past. 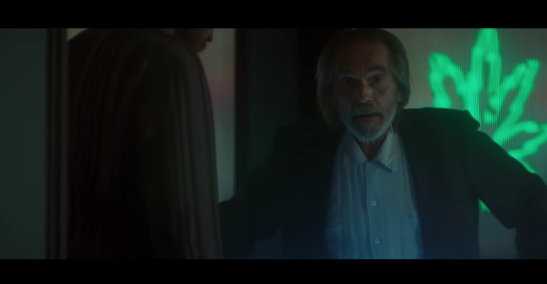 “Melancholia’s” Kirsten Dunst fully embraces the role of Theresa with her mind, body, and soul by not holding back in a role that demands more of a solitary, voiceless performance blanked with grief. Dunst nails it with ease. Accompany the Sam Raimi “Spider-Man” actress is Denmark born Pilou Asbæk as the pot dispenser shop owner Keith who conspires to work out deals with his special customers in need of once and for all ceasing the pain of ailment. The dynamic between the two is hot and cold as the sensation of tension is always present even if the dialogue is not. Asbæk’s Keith actually drives the plot, creating situations that put Theresa in a dilemma inducing pickle and he certainly takes advantage of her grief. Asbæk smug performance couldn’t get anymore complex as he portrays an arrogant, hippie-esque pot shop entrepreneur in a small Washington state town, but exhibits a softer side, especially for his friends and for Theresa, at times. Joe Cole (“Green Room”), Steph DuVall (“Scanner Cop”), and Jack Kilmer costar.

“Woodshock,” as a whole, attempts to grapple too much in the dimension of the subliminal. The Mulleavy sisters focus on symbolizing and using metaphors rather than being straight shooters to communicate Theresa’s internal struggle and between the montage of trees, the vibrant visuals, the double exposures, and various angles of a single action, there’s a choke that occurs, making apprehension hard to swallow. The siblings also display their inexperience at times. Despite completing impressive artistic visuals and able to create some slight movie magic as independent filmmakers, the directors’ choice to keep scenes from being cut and left on the editing room floor are questionable. One example would be Keith in the bar, moving his arms in a slow, locomotive motion, listening to a mellow track on the jukebox This scene is late is near the latter part of the film and doesn’t convey anything more about the character than already established with no transition scene to provide any kind of setup, background, or foreshadowing.

Lionsgate Films presents “Woodshock” onto a slip-covered High Definition, 1080p Blu-ray plus Digital HD. The MPEG-4 AVC encoded BD-25 disc has an widescreen aspect ratio of 2.39:1 that’s conventionally stable. Faint grain filters through, but this could be an intentional cinematography tactic. The English DTS-HD Master Audio track isn’t wired to pair with such slow, mellow storyline that doesn’t have a range to fully test the HD quality except for invigorating Peter Raeburn’s enlightening hodgepodge score. The dialogue track is muddled and nearly unintelligible by the overshadowing score. Bonus material includes “Making Woodshock: A Mental Landscape” that opens up Kate and Laura’s intentions in expressing Theresa as a character, their style in filmmaking, and to up sell their cast and crew. “Woodshock” is an artistic visual stimulation with no rival, but Kate and Laure’s inexperience emanates through more than their subliminal sub-contexts. Kirsten Dunst marvelously challenges herself that inarguably gives her even more of a range as an actress that only proves her ability to not be a one trick pony in and out of Hollywood.