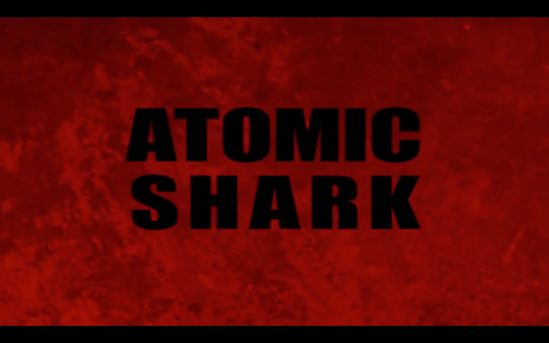 On the gorgeous and lively beaches of San Diego, an atomic level predator lurks underneath the clear, blue water, splitting the ocean surface with a large glowing red dorsal fin. Lifeguards, Gina and Kaplan, track a series of scorched dead fish washed ashore and determine that a catastrophic environmental event is afflicting the shoreline in the form of an atomic shark, a sunken Russian nuclear submarine byproduct roaming unstable through the ocean, ravenously devouring ablaze any boat or any person that it comes in contact with, and unwittingly ready to deploy a one megaton nuclear explosion if provoked with enough ammunition. Bogged down by incompetent supervisors and purposeful governmental misdirection, Gina and Kaplan turn to radical social media journalists, a perverted drone enthusiast, and a salty boat captain to form a ragtag team of shark hunters to save the West Coast from becoming a fallout wasteland for thousands of years. 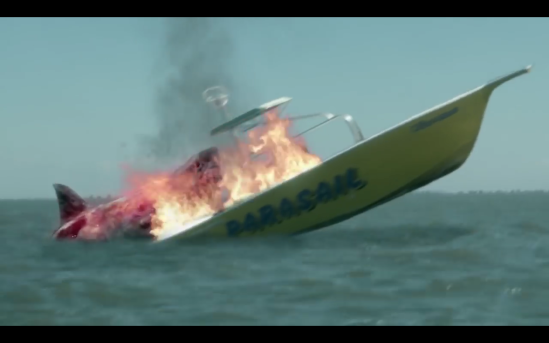 Just when you thought it was safe to return to the genre, another made-for-TV cheesy killer shark movie breaches to the small screen surface, but this particular man-eater has bite. “Sharktopus” doesn’t have enough tentacle fortitude. Tornado sharks are just a bunch of wind bags minnows in comparison. And “Dinoshark,” well, that beast is just ancient history. All these other silky, grey predatory kings of the ocean are no match for this man-made mistake of a Godlike creature in the 2016 horror-comedy “Saltwater: Atomic Shark.” You’ll need a bigger boat or a bigger ocean or a bigger sense of humor as this nuclear fish bestows havoc and mayhem upon a usually quiet California coastline with a fiery belly. “Lake Placid vs. Anaconda” director A.B. Stone helms a script by Scott Foy, Jack Snyder (“Fatal Exam”), Griff Furst (“Ghost Shark”) that’s essentially Baywatch chummed with “Sharknado!” 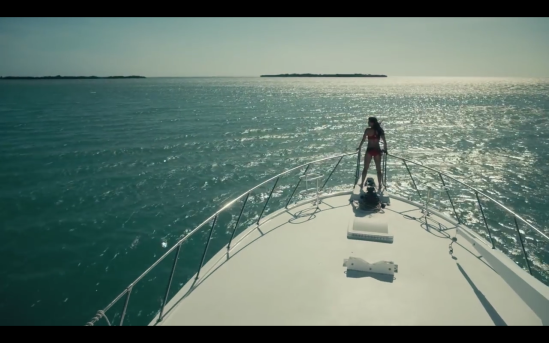 Leading a group of amateur shark hunter is the novice environmental scientist and lifeguard Gina, played by Rachele Brooke Smith who has worked with writer-director Griff Furst previously on the 2016’s horror-mystery “Cold Moon.” Almost immediately, Rachele won the heart of this viewer as the amazonian built actress is tough as she is beautiful and all the while, never out of her lifeguard swimsuit. Her performance against a CGI monster shark is the best amongst her cast mates. She’s opposite Bobby Campo, as an injury sidelined lifeguard with a cavalier life persona. “The Final Destination” actor has the charm and the looks of a spring breaker, ready to drink tequila shots from between the cavernous cleavage of intoxicated co-ed, but Campo’s rides the fine line into as an attentive and cooperative friend to his leading lady costar. Bud Bundy, I mean David Faustino, reprises a similar role from his “Married with Children” days with Fletcher, a drone enthusiast with a penchant for videotaping babes on the beach. Second shark flick being released in the same year along with “Sharknado 4,” Faustino keeps the old comedy schtick well lubed for a slick chuckle or two in his scenes. “Atomic Shark’s” headliner, “The Lawnmower Man” Jeff Fahey, gears up as a stern boat captain hellbent on leaving himself out of trouble. Fahey provides his trademark soft blue eyes under a furrowed brow and a solid performance to earn him his payday as the most recognizable name on the credits. The remaining cast include Isaiah LaBorde (“Cold Moon”), Adam Ambruso, Mariah Bonner, Jake Chiassen (“Trailer Park Shark”), and Jessica Kemejuk, producer of “The Neighbor.” 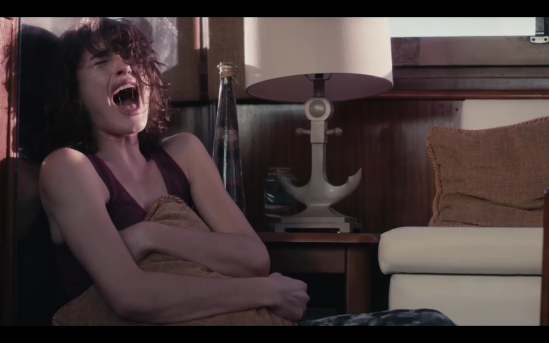 While “Saltwater: Atomic Shark” can be appreciated for not taking itself too literal or too serious as it organically shouldn’t, the comedy portion teeters on a fine line between stalely outdated or casually tongue-and-cheek. For plot progression during one of the movie’s pivotal discoveries that lead the would-be heroes to the shark, A.B. Stone mocks up a yelp.com review graphic image for one of the story’s locales at a beachside restaurant named Tales from the Grillside that loses one star when characters are caught in the middle of restaurant patrons, and the catch of the day, start simultaneously exploding via radioactive instability. The spontaneous combustion of a snobby Guy Fieri type to kick off the magnificent event after eating the infected fish spells classical campiness in all it’s oddball allure, but when that yelp.com review comes up on screen and downgrades the grill’s three star review scale to two, the moment feels out of place, cheap, and unnecessary post bombastic detonations of fish guts and human entrails, splattering into the crevices every nook and cranny, are more than satisfying. Scenes containing comedic tension highlight some of the film’s best moments not involving the shark itself, especially when Mariah Bonner’s Felice, after losing her conspiracy theorist companion Troy to radiant jaws of the shark, takes all her angst out on Gina. Felice pins down Gina’s head while trying to spark a lighter to ignite a yacht full of dynamite and as the anxiety riddled score inches closer with Felice moving toward to lighting the explosives, the score abruptly cuts with each time Gina blows out the small flame. It’s a simple, yet well thought out moment with poised performances from both actresses to bring that flash of comedy to ahead. 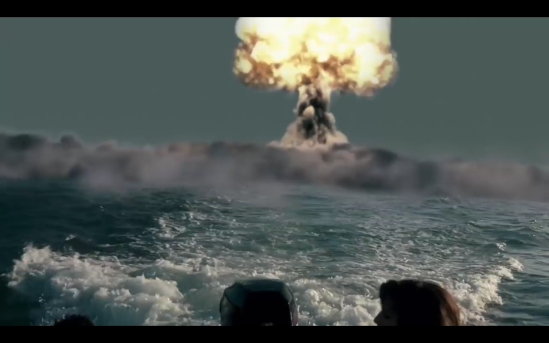 ITN distribution and MVDVisual distribute the Curmudgeon Films’ “Saltwater: Atomic Shark” onto DVD home entertainment. Presented in a widescreen, 1.78:1 aspect ratio, the imagery consists of numerous ariel shots, especially from the implemented drones. The overhead view of the water is immaculate, yet portions of the picture, mostly in wide and long shots, faintly go into pixeling state due to most likely the data transferring speed. It’s not as heinous as imagined as the pixeling is quite miniscule. The English Dolby Digital 5.1 audio track is a well-rounded machine that pickups up the generic, yet sometimes catchy score, conveys a clear dialogue, and produces ambient sounds like the beach, explosions, and drones inside the metrics of surround sound. If you want to see vengeful, eco-friendly lifeguard ride an outboard motor under the ocean surface to deliver bundled sticks of TNT to a giant, radioactive shark, then this shark frenzy flick, “Saltwater: Atomic Shark” is right for you!

Sink your TEETH in this “Saltwater: Atomic Shark” DVD!