A father mysteriously goes missing when visiting aliens violently abduct him from his serene cottage home. Thought to be a deadbeat husband and father for abandoning his family, the man returns three years later at the doorstep of his wife’s London flat. A bewildered and conflicted wife struggles with his return while the live-in boyfriend makes it clear that he wants the man out, shelling out a vicious cold shoulder whenever in the same room, but the returned father seeks to resume his patriarchal position amongst his family; however, he’s not exactly the same person he used to be as he garnishes an exterior shell of a human and the interior of a hostile extraterrestrial with ulterior motives. His return has nightmarish affects on his traumatized son whose becoming a device of deviancy at the hand of his father’s otherworldly influence, issuing carnivelesque ill will toward other flat tenants. By the time the boyfriend suspects something, the not-so-friendly alien might have already established the intended invasion into a family so eager and willing to accept their sorely absent loved one.

Perhaps one of the most out of this world science fiction horror films ever made that’s set on Earth, “Xtro” is the Don Coscarelli-like bizarre horror film from British filmmaker Harry Bromley Davenport. Co-written the story with Michael Parry (“The Uncanny”), Davenport’s blended American and British financed 1982 unsettling venture was penned by Iain Cassie (assistant director on “Schizo”) and Robert Smith. Honestly, no other film comes within a comparison zone of “Xtro’s” sheer creativity that doesn’t just redesign the genre or it’s tropes, but, rather, embraces a new kind of fragmented oddity by telling an uncomfortable story consisting with the graphic birth of a full grown adult, the flesh crawling sensation of an adult man bending down to child level to drink from the bare skin of a child’s shoulder, and the exhibition of the dark pageantry of humor underlined death. Over an umbrella of horror shades metaphorically a fairly common family crisis baseline premise of an inattentive father’s return home to try to reinstate himself with conflicted wife and eager son only to, once again and concretely, destroy them internally.

Philip Sayer sets foot into the duplicitous titular space invader. The trained veteran actor had experience from the stage that translated to what could be considered performance art in “Xtro” to embodied a creature on the inside to his humanity on the out. Sayer costars alongside an unseasoned child actor, Simon Nash, as the young Tony and the pair make a inharmonious father and son with cankerous performances by Nash who doesn’t exactly fit, when considering accent and even appearances, his portrayed parents. Bernice Stegers is the other half of Tony’s folks and the “Macabre” star does a phenomenal job as the stiffly conflicted mother and wife Rachel Phillips, straining toward more what’s best for her love life rather than to the care of her son. The live-in boyfriend Joe, portrayed by Danny Brainin, limps by as a fairly useless character who doesn’t contribute either way to a conclusion. Other than providing a minor tether to Rachel Phillips life to normalcy, Joe can’t swallow his emotions and the best the character can offer is to abandoned his girl and son, another frail male in their life. Brainin’s performance is good for the character’s weak minded attitude. The cast rounds out with Maryam d’Abo (who goes onto to be a bond girl in “The Living Daylights”), Peter Mandell, and Anna Wing. 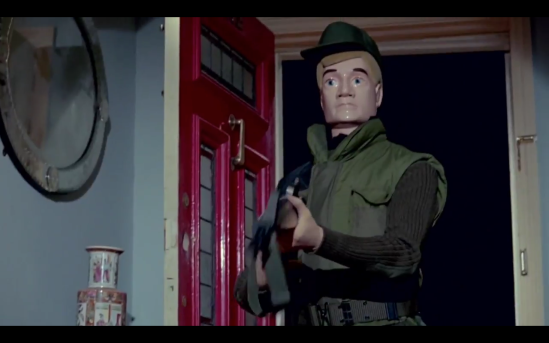 Though thought provoking and wildly entertaining through soul rattling imagery, “Xtro” is by far from a perfect film. Sure, the Tom Harris special effects pull at innard chords you may never knew you garnished and certain scenes would be the subject of mysterious gif images in the dark corners the internet that proclaimed creatures do live unknown amongst us, but the British science fiction horror film, a video nasty of the time, just might have been too absurd in the nonconformist form that struck unpopular opinions with audiences and critics because the villain wasn’t necessarily tangible and wielded a blood stained machete and more so involved obscure telepathic references that were non-explicit. There’s literally no connective tissue which makes this film so beyond the mind’s grasp. “Xtro’s” niche saw non-homaging aspects, but had familiar flavors such as a bit of Peter Jackson humor, a dry slapstick that’s hard to enjoy, but fascinating to take in at the same time. That’s the whole idea behind “Xtro” was to create an off-structured horror film that pushed the limits while not just replicating other great horror movies.

New Line Cinema’s “Xtro” is coming to a limited edition Blu-ray set from UK distributor Second Sight. The newly restored extended presentation of the transfer will also have option alternate ending plus will also be accompanied with the original video version. Unfortunately, a screener disc was provided for this particular review and comments about the image and audio presentations will not be commented on. The disc did include extras such as a brand spanking new 57-minute documentary that included new interviews with Harry Bromley-Davenport, Mark Forstater (producer), Bernice Stegers, Susie Silvey, Tim Dry (Tik), Sean Crawford (Tok), Robert Pereno, Alan Jones and Craig Lapper. Also included is a new featurette with Dennis Atherton, Harry Bromley-Davenport and Mark Forstater, ‘Beyond Xtro’ – a new featurette with Harry Bromley-Davenport and Mark Forstater looking ahead to new reboot, ‘Xtro – The Big One’, including exclusive test footage, ‘Loving The Alien: A Tribute to Philip Sayer’ featuring exclusive Brian May music tribute, and ‘Xtro Xposed’ archive interview with Harry Bromley-Davenport. A venturous Robert Shaye at New Line Cinema wanted to match wits with his own one-two punch version of a video nasty. The result was an out of body experience alien feature with unapologetic tastes and unafraid wills to push the shock market limits. “Xtro” might be one of the billions of stars in the film archive, but at least it’s one of a kind.