Brothers Justin and Aaron struggle to maintain a normal and fruitful life outside Camp Arcadia, the UFO death cult camp they fled as young men. When Aaron feels empty, poor, and hungry as a cleaning serviceman on the brink of poverty and social misfortune, he convinces his older brother to take him back to the camp for one day. Once they’ve arrived, the two felt as if nothing has changed, even the cultists haven’t aged in the decade they were gone. Aaron seeks to reintegrate during his time at the camp while Justin is eager to vacate the premises pronto, but an otherworldly phenomenon promises answers to Justin and Aaron’s perceptions of their former cult and leaves questions to the unexplainable events that surround the camp site. The brothers must solve the mystery before being ensnared by the phenomena that lurks all around them with an ever present eye.

“The Endless” is the 2017 science fiction horror film from a pair of directors, Justin Benson and Aaron Moorhead, who helmed a segment in the anthology, “V/H/S Viral.” The duo also star as the leads in the film as Justin and Aaron. Benson penned the film’ script that has grand originality and fosters an underlying Lovecraftian concept and despite the limited budget, “The Endless” has favorable special effects of mind-boggling proportions incorporated with a splash of mildly dark humor in this blithe fantasy horror. Reminiscent of such other off-the-wall commingling genre films such as Don Coscarelli’s “John Dies at the End” or Madellaine Paxson’s “Blood Punch,” where the supernatural and bizarre collide and the characters are equally demented for a pinch of extra pizazz. 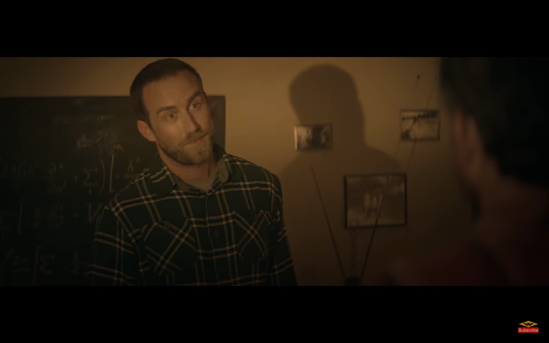 Benson and Moorhead may be the stars of “The Endless” and essentially are the epicenter of the entire premise, but their characters wouldn’t be aptly as important if it wasn’t for the cast that supported them. One of the actors is Tate Ellington (“Sinister 2”) as the unofficial camp leader Hal with the gift of gab and just as mysterious as the camp itself. Ellington’s one of many of the camp so called UFO Death Cult characters that make the story really stick out as odd as there’s Lew Temple (“The Walking Dead”) too. A very unshaven and unkempt Temple weighs the look of an Civil War soldier in Tim and Tim’s distant expressionless is very much Temple’s bread and butter. Rivaling the unnerving silence of Lew Temple is “Alien: Covenant’s” Callie Hernandez. As Anna, Hernandez plays the girl next door, flirting with Aaron with trivial matter that toys Aaron’s inherent innocence. The rest of the cast includes Emily Montague (“Fright Night” remake), James Jordan, Kira Powell, Peter Ciella, and David Lawson Jr. as Smiling Dave.

“The Endless” could be said to have a slew of metaphors and symbolism, even the older brother Justin frustratingly points out how camp leader Hal always speaks in metaphors. So, what is causing all the weird and terrifying atmospherics at Camp Arcadia? Arcadia ends up being an oxymoron as the camp is not harmonious or a utopia as believed, but rather a coiled purgatory with an ominous presence thats ever present. Don’t know what’s watching, where it came from, or what it wants, but it’s driven fear of the unknown as noted during the title card epilogue of a quote. What we do know is this presence, this thing, is massive, looming over the hills and in the depths of a nearby lake; the thing is very Lovecraftian in proportion to what that means. Hell, even the quote I mentioned earlier about fear of the unknown is pulled from H.P. Lovecraft himself – “The oldest and strongest emotion of mankind is fear, and the oldest and strongest kind of fear is fear of the unknown.” The brother symbolism fear for they have fear of the outside world and fear of their unforeseen and possibly poverish future, but once Justin and Aaron come to terms with ending being at odds with each other, the brothers know they can conquer whatever comes at them together.

Well Go USA Entertainment presents Snowfort, Love & Death, and Pffaf & Pfaff productions’ “The Endless” onto Blu-ray home video. The single disc BD-50 has a widescreen 16:9 aspect ratio. Image presentation has fair natural tones with a set of a rather light yellowish tint during desert sequences. Color palette is enriched especially when the inexplicable does come ahead; moments of heavy tinting, such as a heavy red flare, inexplicably stand out. Blotching, DNR, or banding are an issue here, leaving the details considerably intact in a plenty of the duration. The English DTS-HD Master Audio 5.1 surround sound has not gaffs about it. The plentiful dialogue is clearly present to get the full story told, ambient and phenomena effects proportionally ranged and appropriate, and the soundtrack supports to dialogue and story with the amount of depth. Overall, the tracks are consistent throughout. Bonus features include an audio commentary with directors and producers, a 30+ minute make of segment, a behind the scenes featurette, deleted scenes, Visual effects breakdown, a “Ridiculous Extras” featurette that includes casting, and trailers. Don’t let the peppered black comedy in “The Endless” fool you; Justin Benson and Aaron Moorhead have constructed an original sci-fi horror that shells out an unsettling ambiguity of a modern and universal fear too invasive to try and stop the perpetual replaying of attempting to know the unknown.

Purchase “The Endless” on Blu-ray!