Flustered about the severe flop of her latest book, crime novelist Robin Richards encounters writers’ block as a result. Losing inspiration in the big city with her droll boy-toy, her publisher recommends a visit to the scenic Swedish countryside as a change of pace that’ll remove her out from the comfortable surroundings and, hopefully, begin to craft new ideas for a rebound book. Totally out of her element quartered inside a farm residence, Richards can’t help to investigate her peculiar hosts and a chauffeur, a super fan who is besotted with her while his wife voices her utter disdain for the writer, but their odd behaviors stimulate inspiration for her work beyond her ability to observe that something is dreadfully and dangerously wrong with them.

From a title that can be interpreted as an oxy-moron, “Blood Paradise” spills onto the screen as a sexy suspense-thriller with pinpoint-peppered dry comedy. The Swedish bred film is directed by Patrick von Barkenberg, who also has an important-minor role contribution to the narrative as well as co-written alongside the film’s lead, Andréa Winter, that proposes total control over the juxtaposition of not only the sane versus the insane, but also enthralls with a crime storyteller from the city thrust into her own calamitous tale of murder on the rural fringes. Barkenberg and Winter have poised chemistry weaving a story that’s mostly building the bizarre attributes of characters with even Robin Richards’ pooled into that group being a stranger in a strange land; the filmmakers’ past collaborations of short films, including “A Stranger Without” and “A Little Bit of Bad,” firmly establishes them as being the right kind auteurs for the job.

As stated in the above, Andréa Winter stars as Robin Richards, an adventurously alluring writer willing to try anything to get her career back on track. Winter, who is also an electro indie pop singer in Baby Yaga, is as stunning at her performance as she is in her natural beauty with a role that tenaciously exhibits her uneasiness with the locals and their bare necessities while also not being afraid to bare nearly all herself in compromising positions and places. While Robin is most solitary in conversation as she is interactions with other characters, there’s great dynamic contrast with Hans. Hans Bubi and, yes, if you say it out loud, a definite nod to a memorable line from “Die Hard.” Played by Christer Cavallius in his sole imdb.com credit, Cavallius’s wide-eyed and big smile below his shoulder length hair makes him a comical to a point and when you add Hans’ current hell of a marital status with a potted plants devoted woman and his mental blocking obsession with Robin Richards, the overly flawed and desperately optimistic character has hopes and dreams from a slim chance opening that he is hesitant in completely seizing, though we, and even perhaps Hans himself, knows the outcome if he took the risk. Another character highly involved in Richards’ circle of exchanges is with the farmer, Rolf, played by Rolf Brunnström. Rolf is a seriously complex character, an irresistible mystery to the author who spies on his enigmatic tasks involving a locked barn with windows covered with plastic. Rolf’s detached and impassive with his wife’s death that looms throughout the story and Brunnström, a middle-aged man, turns out to be more than his simple life implies. “Blood Paradise” remaining cast includes Martina Novak, Ingrid Hedström, Ellinor Berglund, and Frankie Batista. 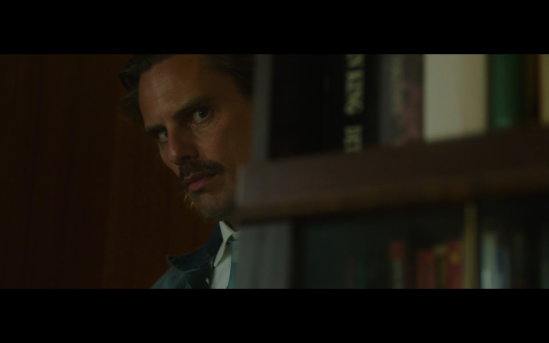 Finding the comedy in a film like “Blood Paradise” might be a task suited for people with a dark sense of humor, but the quality is present and can be compared to the offbeat nature that Eli Roth subtly nurtured in his breakout flesh-eating squeamish-er “Cabin Fever.” Dry and restrained, the comedy is dialed down to a low-lying hum in “Blood Paradise,” honing in frequently on the sexualized suspense that’s audience attractive and runs parallel with Robin Richards profession as a crime novelist who pens tales involving gimp-cladded deviants, and the story simmers to a boil, reducing down story intricacies into an unraveled macabre of things once dead are now very much alive in transcendence, just like a good crime narrative should unfold.

Gripping with toe-curling tension, “Blood Paradise” arrives on a Blu-ray home video courtesy of the Philadelphia based distribution company, Artsploitation Films. Presented in HD, full 1080p anamorphic widescreen, 2.35:1 aspect ratio, Artsploitation Films has a remarkable looking release on their hands that’s soft where intended and detailed where necessary, registering a vast palette of rich colors thats typical with digital films recorded with an Arri camera, as listed on the internet movie data base. The English and Swedish 5.1 Dolby Digital surround sound has an equally good and clean facet of range and depth for a rather subdued thriller that’s more mystery, than panic stricken. Soundtrack by Andréa Winter adds a bit of lively-atrocity synth that doesn’t push through enough to be a factor in it’s assimilation between the ambience and dialogue tracks. Bonus material includes three deleted scenes and two music videos by Baby Yaga – “Dreamer” and “You and Me” – that feature artistic renders of the film. “Blood Paradise” is no tick sipping on sangre-sangrias on a beach somewhere. Patrick von Barkenberg’s “Blood Paradise” captivates in the inexplicable without sheering away from fraught character contexts while still maintaining a healthy dose of sex appeal and blood.

One response to “Writer’s Block is a Fictional Author’s EVIL! “Blood Paradise” review!”