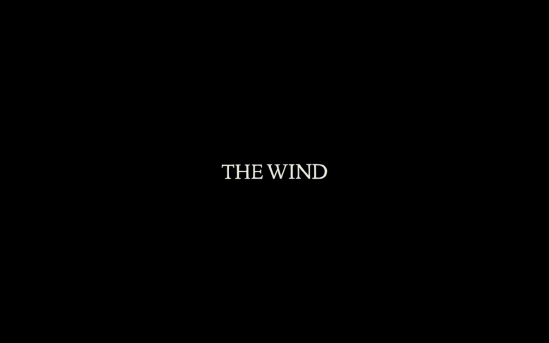 Living at the edge of the 19th century frontier, husband and wife, Isaac and Lizzy, live in complete seclusion as far as the eye can see until another couple, Gideon and Emma, settle a mile away in a nearby cabin. Unused to the punishing conditions the frontier might yield, the St. Louis bred Gideon and Emma find living without the comforts of urban life challenging and rely on Isaac and Lizzy’s strength and experience for survival. However, the frontier’s harsh reality produces a malevolent presence that flows through the prairie, stalking and toying with the settlers, only revealing itself to Lizzy while the others act if nothing is going on or just acting strange. The sudden and violent death of Emma and her unborn child send Gideon and Isaac on a two-day ride to nearby town, leaving Lizzy to face the isolated terror alone with only a double barrel shotgun that never leaves her side, but in her strife, Lizzy learns more about her newfound neighbors and even unearths some troubling truth about her husband that even further segregates Lizzy from the rest of reality.

If there wasn’t one more single thing to demonize, director Emma Tammi conjures up “The Wind” to mystify the western frontier. As Tammi’s debut directorial, penned by short film screenwriter Teresa Sutherland, the supernatural film’s dubbing could be a rendering of a long lost Stephen King working title, but all corny jokes aside, “The Wind” really could from the inner quailing of Stephen King’s horror show mindset. The film’s produced by Adam Hendricks and Greg Gilreath under their U.S. label, Divide/Conquer, and released in 2018. The same company that delivered the horror anthology sequel “V/H/S: Viral,” Isa Mezzei’s sleeper thriller “CAM,” and the upcoming, second remake of “Black Christmas” with Imogen Poots and Cary Elwes. With a premise dropped right into the fear of the unknown itself and with some powerful production support, “The Wind” should have soared as an unvarnished spook show come hell or high noon, but the jury is hung waiting on the executioners ultimate verdict regarding Tammi’s freshman film.

Five actors make up all the cast of “The Wind,” beginning with the solemn opening night scene with frontier men, Isaac Macklin (Ashley Zukerman of “Fear the Walking Dead”) and Gideon Harper (Dylan McTee of “Midnighters”), waiting patiently outside a cabin door until Isaac’s wife, Lizzy (Caitlin Gerard of “Insidious: The Last Key”) walks out, supposed baby in hand, and covered in blood. The subtle, yet chilling scene sets the movie from the get-go, sparking already a mystery at hand and coveting most of the focused cast. The two characters unannounced at the beginning, swim in and out of flashbacks and toward the progression of Lizzy’s embattlement with “The Wind.” That’s not to say that these characters are any less favorable to the story as “Slender Man’s” Julia Goldani Telles shepherds a vivid description of subtle lust and extreme instability that rocks a strong and self-reliant Lizzy living priorly a stale reality. There’s also the introduction of a wandering and warm pastor that leads to chilling reveal questioning any kind second guesses there might be about Lizzy. All thanks to veteran television actor, Miles Anderson. 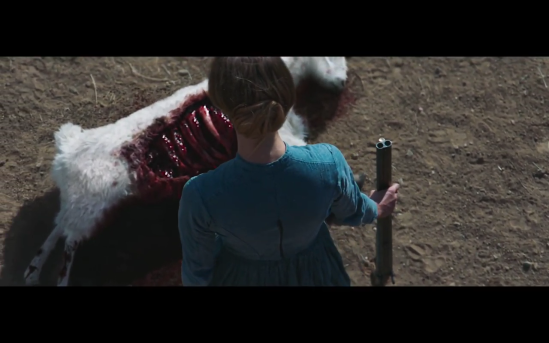 “The Wind’s” non-linear narrative teases two courses, one working forward and the other backwards to a catalytic moment that becomes motivational for majority of characters in the prior days and the beginning of the end for one in particular. Though the latter centralizes around Lizzy’s flashbacks and encounters with the evil spectral wind, her descent into madness conjures more violently through the discovery; it’s as if her current state of mind has been stirred, whirled, whipped, tumbled, and agitated from the past that keeps lurking forward into her mind’s eye. Tammi pristinely conveys a subtle message of undertones from the past and present that chip away at Lizzy’s forsaken reality, leaving those around her delicately exposed to her untreated alarms to the nighttime wind of a menacing nature. Teresa Sutherland’s script to story is illuminate tenfold by the wealth in production that recreates the rustic cabins and the callously formed hardships of the western frontier and if you combine that with the talents of cast, “The Wind” will undoubtedly blow you away. 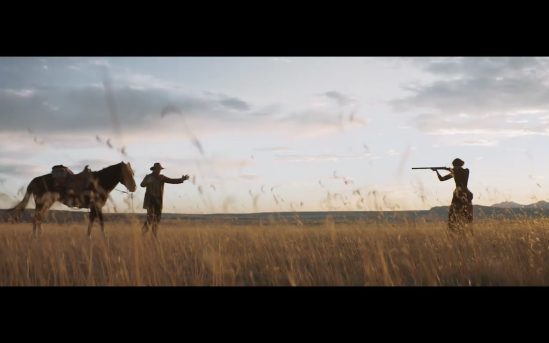 Umbrella Entertainment delivers Emma Tammi’s “The Wind” into the Australian DVD home video market and presented in the original aspect ratio, a widescreen 2.35:1, that develops a hearty American untrodden landscape for the devil to dance in the wind. Cinematographer Lyn Moncrief’s coloring is a bit warm and bland to establish a western movie feel and really had notes of a Robert Eggers (“The Witch”) style in filmmaking with slow churn long shots and a minimalistic mise-en-scene, especially for a similar pseudo-period piece. Eggers invocation solidified itself more so in the Ben Lovett’s crass and cacophony of an instrumental score that adds more to the creepiness factor while remaining relatively framed in the time era. The Umbrella Entertainment’s release goes right into the feature without a static menu so there are no bonus features to dive into. “The Wind” might feel like an unfinished piece of cinematic literature, but remains still a damn fine thriller that seeps ice cold chills into the bones and ponders the effects of loneliness and trauma that’s nearly puts this film into the woman versus nature category, a premise that will be hopefully concluded by a upcoming book adaptation.