In Youngstown, Ohio, a small documentary team follows popular fashion blogger JoAnne and while continuing to roll film during a friend’s wake, a fallen member of the military during combat, a horde of zombie horror storm the reception hall packed with celebratory mourners. JoAnne, the documentary crew, and a handful of JoAnne’s friends run for their lives through all of Youngstown only to be rescued by a former Afghanistan war solider, Atam, debriefing the situation of a powerful drug manufacturing corporation behind the localized crisis. The survivors soon realize that a band of greedy mercenaries, Atam’s ex-brothers in arms, are supervising the drug’s effects that will, in turn, create a money making, desperation cure in the weeks to come.

If you haven’t guessed, 2012’s “The Zombinator” is a zombie title melded with “The Terminator” franchise and helmed by documentarian and comedy writer-director Sergio Myers. “The Zombinator” is the first horror feature in the filmmaker’s videography repertoire that chips in comedic soundbites to fully absolve the zombie apocalypse film from being a strictly horror. The very reason the film’s called “The Zombinator” should have been a great comedy-horror indicator as well. Sergio Myers’ 7 Ponies Productions finances the micro-budget, semi-found footage feature that egregiously pollutes the very “Terminator” brand in a way that promotes “Lady Terminator” from being not only a grandly exploitation of Indonesian deference, but now an innate fragment of the renowned franchise. “The Zombinator” endoskeleton is not as indestructible with little-to-no homage connection other than a muscly actor donning his best Arnold Schwarzenegger lookalike getup, dressed a bastardized version of the T-800 infiltrator. No machines. No time travel. No anything that approximates the franchise that would have been a cool concept of a time traveling machine hellbent on blowing zombie scum away.

The cast is virtually made up of unknowns, faces who certainly received their career start with a foot inside the door of “The Zombinator.” The talent is young and unseasoned, but hungry to make a name for themselves with melodramatic performances despite a poorly written script that’s more stationary than progressive on the coattails of the last “Terminator” film “Salvation.” While the documentary team films fashion blogger JoAnne played by Joanne Tombo, Tombo isn’t the headliner. In fact, a lead is lost in the scuffling mist of the zombie outbreak, but the top bill is certainly given to an experienced acting vet in the hard-nosed form of Patrick Kilpatrick (“The Toxic Avenger,” “Eraser”) as a military colonel squaring up against the poster boy of “The Zombinator” and the film’s co-producer, Joseph Aviel in his debut feature film. Aviel, who has doubled as Arnold Schwarzenegger in the YouTube sci-fi comedy episodes of “Terminator: Genisys: The YouTube Chronicles,” is just as monstrous as Schwarzenegger was in his prime, garbed in a pitch black trench coat, wielding a shotgun, and sporting shades inside dark warehouse and nighttime scenes – keep in mind, Aviel is not playing a machine, but a ex-soldier so there’s really no need for the sunglasses. The rest of the cast, including Aviel, are quite rigid and lost, stuck in a loop of spewing much of the same peculiarities without every changing. “The Zombinator” rounds out with Lucia Brizzi, Justin Brown (“Early Grave”), Diana Sillaots, Jennifer Sulkowski, Scott Alin (“What’s Eating Todd?”), Travis Bratten, Melvin Breedlove, Maria Desimone, and Michael Angelletta. 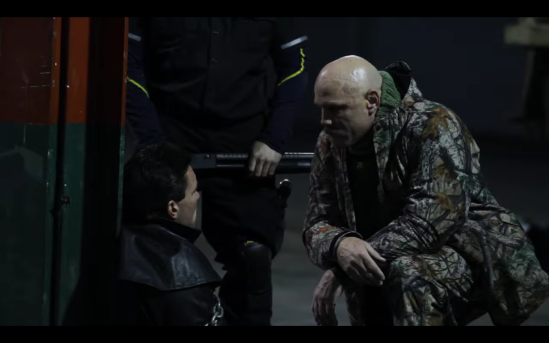 Recently, I caught “Star Trek: Deep Space Nine” episode from “Star Trek: Deep Space Nine” with Patrick Kilpatrick as a hardnosed, war-torn Starfleet officer whose been part of a team holding a pivotal Jem’Hadar communications array in the Chin’toka system. The lean and towering Kilpatrick from 20 plus years ago is nearly unrecognizable as Father Time has been rather unforgiving to the actor’s midsection, but Kilpatrick still has that apathetic stare on top of a sternly contoured face graced now by an impressively horizontal and lengthy bushy mustache. Kilpatrick’s a brilliant highlight in a rather abysmal film of bleary lines on whether it’s supposed to be found footage or not horror-comedy; somehow the found footage crew are not a part of the surrounding action to the extend that zombies and the mercenaries are not aware of their presence despite standing merely a few feet away in plain view, but the survivors are clearly aware of them combatively noting to the crew to turn off their cameras …? Also, the comedic lines, such as, “getting popped by the grand fucking wizard of zombies,” seem sorely out of place, poorly timed between frantic moments of confusion, fear, and strife, and don’t really know if they’re actually intended to be funny…? Confusion doesn’t end there as Youngstown, Ohio is a hop, skip, and jump from rural, to urban, to a dam-side cabin in segued acts, scaling down to miniature and unrealistic grounds of time and space. Lastly, there’s an uneven ratio of zombie action and dialogue exposition that will bore audiences with locale-to-locate histrionics without the commingling remedy of undead mayhem equalization to lure back in the attention of wandering eyeballs and dissatisfied brains.

“The Zombinator” targets and destroys zombies with a brand new DVD home video, released this past March from New Jersey based distributed, Bayview Entertainment, with a slick looking front cover of a T-800 skull half dripping with zombie flesh surrounding a milky white eye. Unfortunately, I was provided with an online screener for review and can’t officially comment on the exact video and audio technical quality, but I will say that the found footage approach render very dark when only a couple of moving LED ring light accessories become the primary source of lighting. The underused original score provided by Todd Maki bests out much of everything else about the project with harrowing tracks baselined by zombie groans and the undetermined reverberations of distant ambience. There were no special features on the screener as well. Like a chunk of spoiled meat prime for tasteful critical fodder, there’s absolutely no wriggle room for positivity for the high concept, low output film, “The Zombinator.” Hasta la vista, baby.

Buy “The Zombinator” on DVD!

Watch “The Zombinator” on Prime Video