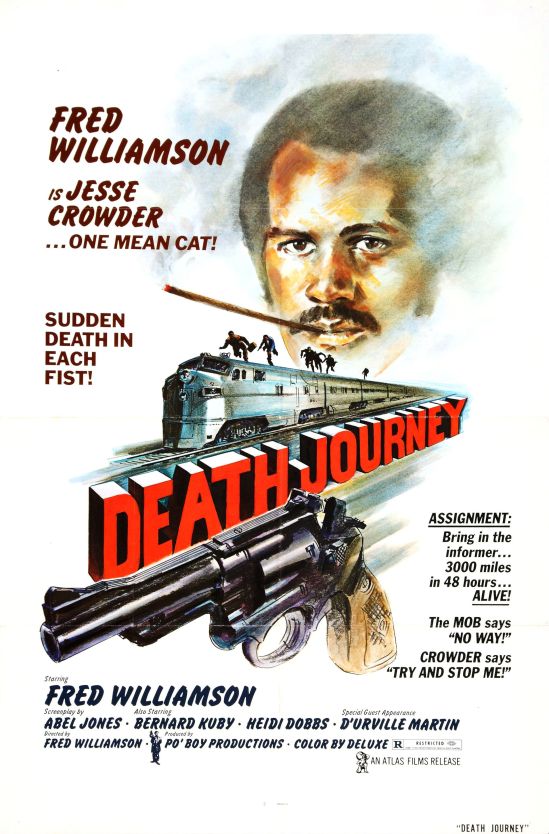 In the midst of my own journey as I move north to face new challenges (and to move in with my fiance), I find the time in this busy futuristic lifestyle of packed boxes and neglected rest to sit and watch Fred Williamson’s 1976 Death Journey released by Code Red DVD.  I adore Code Red; their fans get what they ask for as Code Red’s ears are surely open and ready to receive the intake of rare and outrageous selections.  However, Death Journey marks my very first concern for the DVD label as I’m not sure what pinpoints to be very unique of this example of blaxploitation besides being very bland.

When two New York City lawyers fear their case against a crime lord will die with the rest of their murdered witnesses, they hire Jesse Crowder, a former cop whose mercenary tactics are undesirable but effective.  His $50,000 mission is to escort Finley, a former account of the crime lord, across the country to testify, but at every turn, trouble lies and waits for Jesse and Finley.

Watching Death Journey was painful.  I hate to admit that, but the truth must be told.  Being exposed to various convoluted stories, my mind has become a complex web of complexities.  This back-to-back sequel to No Way Back, also released in 1976, bares a simple-minded story and executed in a simple-minded way.  Pointless exposition describing their every action boggles down the flow of the plot and the obviously bad choreographed fight scenes reveal the faux blows, the dimwitted edited and the placing of the shot directly on a downed villain to show that he has been knocked out by Crowder’s martial arts skills.