From Liongsgate Home Entertainment comes Vestron Video Collection’s Blu-ray releases of two sequels that needed some refreshing! “Return of the Living Dead 3” and “C.H.U.D. II: Bud the Chud” will see the light of Blu-ray day come November 22nd, instilling a 1080p campy fear into hearts of North American horror fans! Packed with extra content and a fresh coat a cover art paint, Lionsgate has resurrected (and remastered) the Vestron Video label from it’s burial ground in the 1980’s, re-delivering cult classic titles into super Hi-Def and redefining a label that made a name for pioneering B-movies such as the below.

OFFICIAL SYNOPSIS
Kevin, Steve, and Katie are an inseparable trio of friends doing some extracurricular snooping in the school science lab when, among the test tubes and beakers, they discover a corpse! But before they can say “Abra Cadaver,” the body disappears, rolling down Route 51 strapped to a gurney. The kids need a spare stiff, and fast. What they find is “Bud the Chud,” a half-dead decomposing humanoid, the result of a military experiment gone haywire. When Bud sets out on a killing spree, the kids, the Army, the police, and the FBI are hot on his trail, trying to save the entire town from becoming “Chudified!”

Return of the Living Dead 3 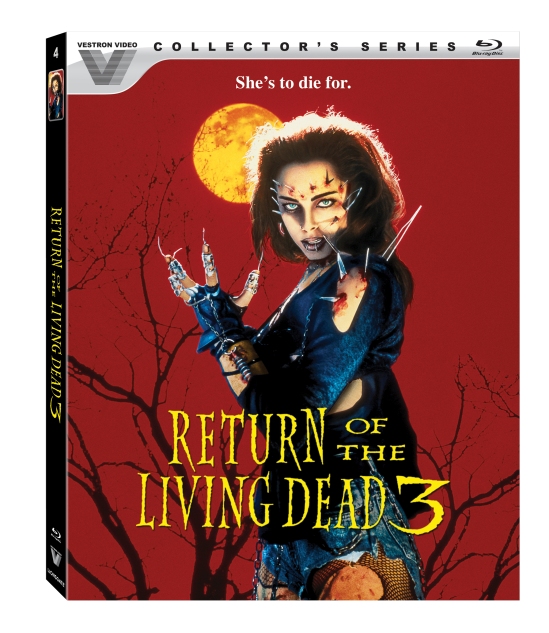 OFFICIAL SYNOPSIS
In Return of the Living Dead: Part II, the chemical Trioxin turned people into flesh-eating zombies. Now, the government is trying to control these unstoppable cannibalistic killers in Return of the Living Dead 3. When a young man uses the chemical to bring his girlfriend back to life after a motorcycle accident, she is driven to eat the only thing that will nourish her…human brains! She tries to stop her own feeding frenzy but a chain reaction has already begun, as hordes of undead are unleashed from their graves!

After the tragic and accidental death of their young son, Richard and Doreen escape from their painful memories by moving to a quick-sell, rundown house with their two children, Jen and Ben. The house holds a unfathomable mysterious past with the previous family disappearing without a trace, leaving many of their possessions behind in the house’s desolate rooms. Ben, who hasn’t spoken much after the untimely death of his twin brother, encounters humanoid creatures in the attic at night when they roam the house. Ben becomes unsuccessful communicating about the horrifying creatures to his parents and even his older sister, shrugging his warnings off as a sign of his continuous grief. When Richard and Doreen leave Jen and Ben home alone in order to go to all night work function, the creatures descend from their attic abode and seek to devour people they can get their hungry hands on.

“Above Us Lives Evil” is the freshman film of Jason Mills circa 2009 and transpires to be a visually interesting piece of creature feature horror cinema even though the story is a bit undercooked and the acting more than often feels like watching a robotic cluster, monotonously reading the script line-by-line. The story opens ambiguously enough with a glum looking man, sitting in his car with a young boy laying motionless at the foot of man’s front bumper while Doreen cries hysterically over him and another boy, Ben, stands in tragic shock over the dead body of his brother. The opening only connects the rest of the story by the segue of the family driving, moving away antagonistically from their tragic past, but the melodramatically written opening needs being revisited, perhaps in the third act, but doesn’t make a reappearance, missing the opportunity to explore deeper into the family’s separation, and becomes sorely adrift from the rest of story’s girth. 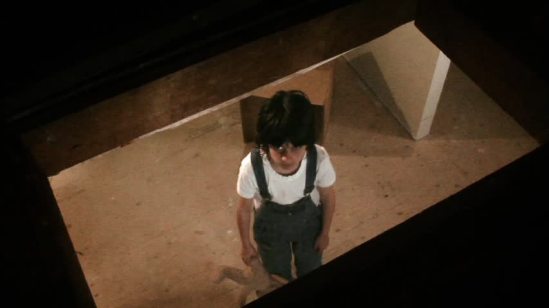 The story continues to plug along of a supposedly grieving family, starting a new life in a new home where we’re informed by the strange neighbors that the previous family just up and vanishes. That sums up the complete backstory revealed of the previous inhabitants. Similar types of voids also rear their ugly little heads. The development upon the creature’s existence isn’t forthright nor is there any explanation into their background, making their existence to be fixtures of the house. These human devouring beings could have been born in the house and lived in that house since the beginning of time for all we’re led to understand.

The Canadian based produced film stars 30 year old Vancouver native Nicola Elbro as the eldest sister Jen. Nicola maintains a solid performance throughout to pull off this low key creature feature and with a little elbow grease added on, I can see Nicola moving from low budget features to the major leagues of horror Hollywood. However, the rest of the cast shares similar generic performances that painfully lead us by the hand, as if we’re not-yet-ready-for-horror-movie toddlers, through the exposition of everything that could have been just simply implied. Even though being one of the more experienced actors on this project, Robert Duncan’s monotony only suffers more drastically from his dimwitted, excuse-ridden character as Nicola’s father Richard. Richard neglects his children’s immediate needs and fears, dismissing them as if they’re too young and naive to know how the world works. Combine everything said here about Richard and he becomes the worst character amongst the rest of underdeveloped characters and there are quite a few.

The creatures had more personality with their caveman-like gaits and ghastly limber appendages, chasing down quickly disposable characters (which inconsequentially are also the main characters). Jason Mills and his relative Simon and Johnny take on “The Strain” resembling creature roles; the Mills’ lanky builds added that extra something to the overall appearance of the creature. Jason Mills took the creature look and ability a bit further with the adjunct mandibles that cover the snake-like tentacles; the construction of this achievement is a mixture of practical effect and CGI. Usually, I’m not a big fan of CGI, but Mills strategically, and successfully at that, obscures much of the creature, hiding the full overlook in the shadows, in the quick cuts, and in the low-light. Many of the effects are obscured; the special effects team mainly uses slight CGI and a bucket of blood or two to create their desired creature attacking effect. Most of the attacks are implied or too far in a long shot, creating the allusion of vicious creature film.

The Sector 5 Films and Chemical Burn distributed home DVD release technically suffers. Digital interference plays havoc, graining certain portions of night scenes while also causing digital waves on other night scenes. The loss of frame rate during other night time moments result in an awkward slow motion. “Above Us Lives Evil,” much like the creatures, should store itself in the attic until ready to descend for blood and to be more captivating with the characters. Jason Mills and Nicola Elbro show promising attributes that can contribute to the horror community and while their contribution may not be with this particular Jason Mills film starring Nicola Elbro, I’m sure we’ll see more of the two in the near future either on another collaboration or separate projects that could, and probably should, begin to turn some heads.