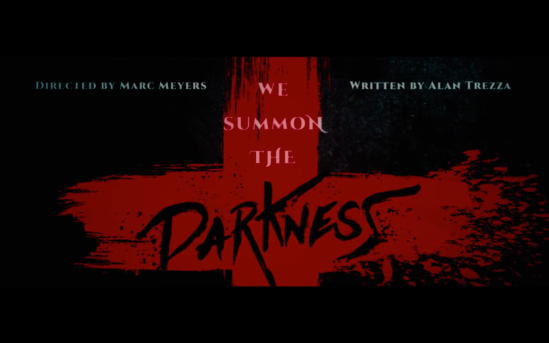 Set in the Midwest of the late 1980’s when a satanic cult has killed upwards of 18 people, slain in groups of threes, across the United States, three good girlfriends set forth on a road trip to a heavy metal concert. The girls bump into and befriend three aspiring musicians and fellow metal heads at the venue, inviting them to beers and some company while rocking out to killer show. The after show party moves to one of the girl’s father’s pastoral home for some late night boozing around the firepit, reminiscing about their favorite bands, and whatever else the dark night has in store for them, but the night of hedonism turns quickly into a night of terror when that satanic cult comes calling for three more souls. Some of the group isn’t truthful about their intentions and dead bodies pile up as the ritual killings aim to continue to spread.

Harking back to that killer trope oddity, a setup very keen in the 1980s, of a mysterious killer hiding behind a friendly façade, “We Summon the Darkness” is a modern day remembrance of such a subgenre in the slasher-survival field set along the drab bible belt of Indiana landscape, though, in actually, filmed in Winnipeg, Canada. At the helm is “My Friend DahmerMy Friend DahmerMy Friend Dahmer” director Marc Meyers from a script by Alan Trezza, who is the creative mind behind the short and feature film versions of another Alexandra Daddario comedy horror, “Burying the ExBurying the ExBurying the Ex,” that co-starred the late Anton Yelchin. May he rest in peace. Meyers moves his hand from the somber and inquisitive mutilations to murder of the Jeffrey Dahmer biopic origins story to the fanatical whims of pious psychopaths, daggering the crux of the issue into the misperceptions of stigmatic cultures and beliefs while at the same time being an extension of the dark comedy tone that worked charmingly with the tale of zombified ex-girlfriend hellbent on revenge. “We Summon the Darkness” is a product from a conglomerate of production companies, highlighting The Fyzz Facility,= (“47 Meters Down: Uncaged47 Meters Down: Uncaged47 Meters Down: Uncaged”), Grey Hawk Productions, Nightshade Entertainment, MEP Capital, and Common Enemy as well as Daddario, herself, pitching in into the producer pool that isn’t her first rodeo in that role. 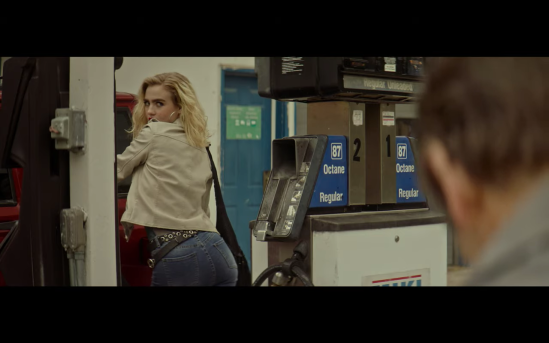 If you haven’t guessed already, Alexandra Daddario (“Burying the Ex,” “True Detective”) stars as Alexis Butler, one of the three metalhead girlfriends cruising to the show, and sequestering herself the ringleader of the road tripping trio as a level headed, parental type with an edge to keep her ostentatious blond friend, Val, played to the fine tune of being uninhibited crazy well by Maddie Hasson, and the timidly sharp Beverly, a role docile to the point of uncertainty and shepherd well by “Hell Fest’s” Amy Forsyth. The three very attractive concert goers bump into another trio of friends, more haplessly hazardous, if not hopeless, band mates who try their hardest to be as metal as they can be, even if that meals throwing a chocolate milkshake out of the window of their speeding van onto the gals’ Jeep. Austin Swift, Logan Miller (“Scouts Guide to the Zombie Apocalypse”), and Keenan Johnson (“Alita: Battle Angel”) make up the group caught red handed in a stroke of coincidence that the girls find them at the very same concert. As much as the two groups mirror each other in personalities, matching up almost perfectly in the varying degrees of state, one group holds a darker secret that could cost the other their very lives. That level-headedness Daddario portrays onto Alexis’ mindset becomes ravaged with wild fires in her eyes and her laid back amount of patience becomes threadbare frazzled when the bodies start to drop in a satanic twist of murder and mayhem, frenzied with extreme ideology founded on multiple levels of greed. Daddario wears crazed well in a very different side to her usually starry eyed and elegant approaches, making all the others seem abhorrently normal in comparison. “We Summon the Darkness” rounds out with Allison McAtee, Tanner Beard, Harry Nelken, and that “Jackass” Johnny Knoxville as Pastor John Henry Butler. 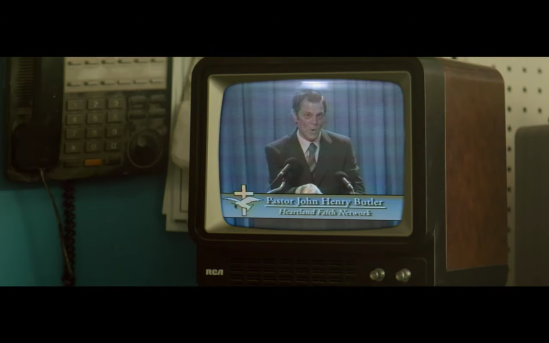 Despite Daddario’s rising stardom and luminous performance, “We Summon the Darkness” falls hard into a mosh pit of despair. The concept is sound and promising, but the execution couldn’t rise to the occasion with limited secretion of the murderous evil that has spread like a pandemic across the nation that’s has sorely downgraded and diluting the nature of the news and media’s role in beyond hammering in the deaths. When story turns dark, the effect feels whiffed and not as jarring as hoped as little is then diagramed to help assist the viewer grasp just what these satanic cultist wish to accomplish. Also, Trezza’s script is highly predictable as the twist is unfolded fairly early on even before the catalyst transition to a darker tone, spoiling the unveil with too many gnomic sidebar conversations and a slew of obvious character tells that don’t exactly shield the truth of their true wolf in spiked studded, black jacketed, metal band patched sheep’s attire. Also, the film pulled too many punches, teetering on the balancing beam whether it’s an edgy killer comedy or a killer comedy with that’s soft around the belly area. Plus, I’m still trying to figure out why a walk-in pantry has a lock on the inside…?

Metal posers rule while the victims haplessly mewl in this Marc Meyers’ film, “We Summon the Darkness,” hitting retain and digital shelves this week on DVD, Blu-ray, and Digital courtesy of Lionsgate and Saban Films. Since the screener provided was a digital streamer, the video and audio aspects will not be covered; however, the Blu-ray specs will feature a 1080p High Definition, 16X9 (2.39:1) widescreen presentation with an English 5.1 Dolby True HD mix while the DVD is presented in the same aspect ratio and will sport an English 5.1 Dolby Digital Audio. Both releases with have optional English, Spanish, and English SDH subtitles. Special features will include a featurette entitled “Envisioning Darkness” and an audio commentary with director Marc Meyers and writer Alan Trezza. “We Summon the Darkness’s” cheekiness is fresh for an 80’s maniac homage armored with solid performances by Alexandra Daddario and an uncharacteristically stoic Johnny Knoxville as a devout pastor against metal music, but seizes up, derails off the tracks, and fizzles to a reduced version of the greater version it could have been.

“We Summon the Darkness” out now on Blu-ray / DVD/ Digital! Click the cover!